Since the 2009 takeover of Eidos plc (the holding company of UK games publisher, Eidos Interactive) by Square Enix, and subsequent reorganisation, Square Enix Europe has been managing one of the most interesting collections of video-game properties. With an eclectic mix of both European and Japanese franchises, Square Enix currently controls everything from Tomb Raider and Hitman, to Final Fantasy and Dragon Quest. With such a broad mix of intellectual property, it is no surprise that Square has attempted to capitalise on the rapid growth of the mobile and tablet market over the past decade. In some cases, it has done this by building original series, with games such as Deadman’s Cross and Bloodmasque, but perhaps what is more interesting are the different approaches the company has taken with regards to its pre-existing franchises.

In the case of many of its older titles, Square Enix has simply ported them to mobile platforms relatively intact. Many of the earlier Final Fantasy games, Chrono Trigger, and the Secret of Mana have all been made available on the Apple App store, often through porting over already existing remakes (such as those for the Nintendo DS or Game Boy Advance). In these cases, these experiences have been left alone for the most part. You won’t find in-app purchases, ‘energy bars’ or any other of the countless game design tropes commonly used in the mobile games market. In their place though, is a more premium pricing structure. Most of these older games are priced far higher than their alternatives, ranging anywhere from 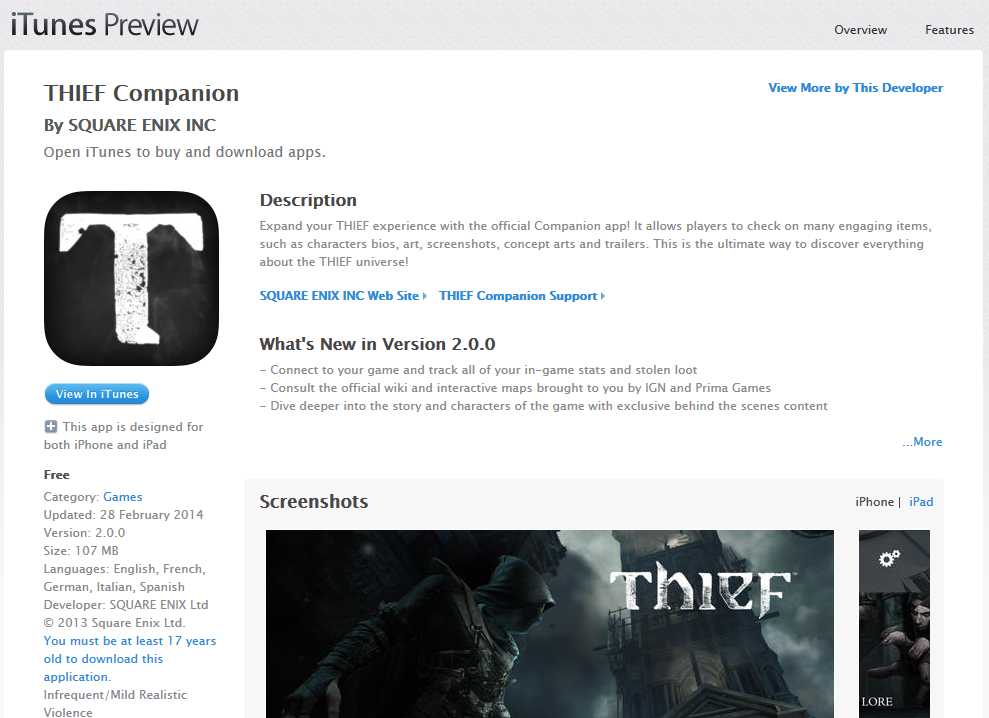 14.99, a far cry from the free or 99 cent apps you’ll find elsewhere. Judging by their continued popularity though, it seems that this has been quite a successful move. Porting also hasn’t been exclusive to just Square Enix’s Japanese properties or its older titles. Look hard enough, and you’ll eventually find a copy of the original Tomb Raider, Lara Croft and the Guardian of Light (a 2010 Xbox Live Arcade game) and The World Ends With You (a 2007/8 DS game) on the App store too, similarly priced at a slight premium, and all of which seem to be relatively successful.

Other forays into mobile games have involved the development of ‘companion apps’. Often to accompany new releases, these have been made for franchises such as Thief and Hitman, functioning as social networks, scoreboards, as well as places for fans to discover more story content. While these may have limited appeal, coming across as simple marketing for non-owners of the game in question, they do seem to resonate strongly with fans. That being said, there do seem to be better examples of these ‘companion apps’ elsewhere. Ubisoft’s Assassin’s Creed IV for instance featured a similar app that allowed you to connect to your game, view maps for collectibles, read codex entries, and even earn money in-game through a fleet-based mini-game that would sync between your game and app. While some may express a strong disinterest in downloading a separate app, there is something incredibly satisfying in progressing in your game, even when away from home, one that companies such as Ubisoft and even Nintendo seem interested in pursuing.

The third major way that Square Enix (and other publishers) have approached mobile games has been through the adaptation of pre-existing franchises for new mobile instalments. Some of the strongest examples of this have been through the Deus Ex and Hitman series with Deus Ex: The Fall and Hitman GO respectively. It’s been with this method though that Square has had the most mixed results. With The Fall, an attempt was made to create a console-like experience for mobile devices, with much of the same concepts and general framework being taken from the most recent Deus Ex release. What this meant, unfortunately, was the appropriation of console-esque controls for a platform that does not suit it. With a touch device such as an smartphone or tablet, it becomes incredibly difficult and frustrating to try and use an on-screen control pad or buttons. Unlike when using a physical controller, in which one receives tactile feedback from pushing physical buttons or sticks, it is impossible to tell when you are actually hitting the relevant controls other than whether or not things are happening in-game. Put on top of that the fact that you have your fingers vying for much of the screen real-estate, and you’re left with an unsatisfying mobile game that poorly attempts to mimic a console or PC experience (an aspiration made all the more apparent by the game’s later port to PC).

By comparison, Hitman GO very smartly adapts an already popular series to an even more popular platform. Rather than trying to emulate any of the past Hitman games, GO simply tries to adapt by taking into account both the limitations and benefits to a mobile platform, reframing the series into a puzzle game. While this may sound unappealing to some, it very cleverly simplifies the already-existing puzzle mechanics of the original series. This approach even extends to the aesthetic design, which evokes old-timey board-games and well-crafted painted models, rather than struggle to portray a realistic art style on a platform that may not be able to handle it. Even in-app purchases are handled sensibly, offering out a handful of hints for free and charging for more, allowing some to choose to puzzle it out and others to seek assistance when stuck, rather than limit one’s progress with an artificial energy bar.

In each of its three approaches to mobile games, Square Enix has had different success. With its re-releases of older titles, it has been incredibly successful, leaving the games safe from modern mobile conventions, and placing a premium on them instead. Similarly, its various companion apps have been successful with their respective audiences, though much could be learned from others on the market. With Square’s re-releases of newer titles, and in some cases its attempts to bring console/PC franchises to mobile, it has had more mixed results. Whilst some exceptions (such as the The World Ends With You and Hitman GO) have smartly adapted to the control interfaces and expectations of phones and tablets, others that have attempted to bring console-like experiences to mobile have been less successful through a combination of poor controls and mismatched mechanics. That isn’t to say that high production value experiences with strong graphics have no place in the market, but rather that a sensible awareness of the strengths and limitations of the platform one is developing for is necessary. Should Square continue to put out releases such as Hitman GO however, it likely has little to worry about.