“Why exactly am I killing this bloke again?”

I turn to my room-mate, currently in the process of making a sandwich, and repeat the question.

“I don’t know, I think he’s the accountant for the bad-guy that killed the main character’s parents or something.”

For all the inconclusive debates over what exactly ‘defines’ a game (and believe me, I don’t exactly feel like reviving that any time soon), one of the most commonly pointed to features is that of interactivity. Playing a horror game, for instance, is different from watching a similar film based simply on the fact that the story hinges on you being able to progress forward. You can’t simply close your eyes and hope for the scene to be over, you instead have to engage with it. And while this interactive nature is part of what makes video games such a compelling art form, it can also make certain shortcomings of games more readily apparent.

Nowhere does this come across more than in the case of action games with strong narrative components. Too often I find myself in the middle of an Assassin’s Creed, Grand Theft Auto, or any other action-based game, wondering why exactly I’m completing the mission that I am. Of course, that isn’t to say that a game with a clash between the motives of the character and the player is inherently ‘bad’ (in fact, juxtaposing the two or misleading the player can often lead to interesting material when done correctly), but rather that it places a higher emphasis on the player being invested in either the story or the way the game plays. Often as a player I simply don’t care about whatever fodder the game may throw at me, because they are treated as simply that: fodder. I’m given little reason to care about why they deserve what they’re about to get other than the fact that the game’s story has designated them as worthy of it.

That’s part of why the ‘Nemesis System’ in the latest Lord of the Rings game is so interesting. 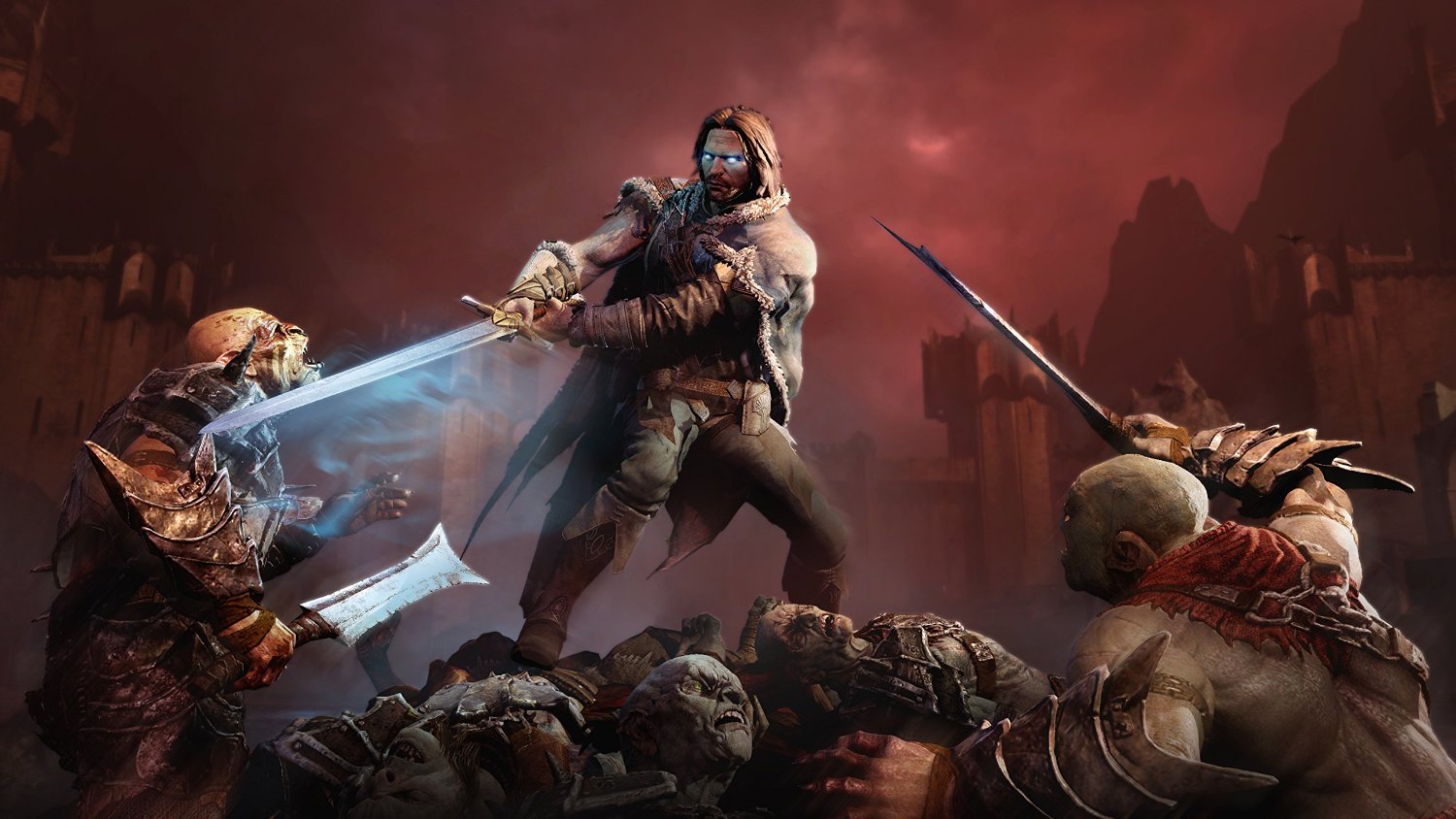 “Get back! Or I’ll use my vaguely-defined Wraith powers!”

In Middle Earth: Shadow of Mordor you take the role of Talion, a ranger of Gondor who has a particular axe to grind with Sauron’s army. Possessed by an amnesiac Wraith with great power, you (as Talion) set off to disrupt Sauron’s plans through a Machiavellian mixture of assassination, intimidation, and pitting power-hungry captains against one another. All of these captains are powered by what the game’s developers have termed the ‘Nemesis’ system. Clever marketing aside, what this means is that all the (partially) randomly-generated Orc/Uruk captains are given different ranks, strengths, and weaknesses. It also means that they simply exist in the game world, wandering about seemingly at their own whim. They’re not, with one or two exceptions, outside of your grasp at any time. You can simply mark their last known location on your map, take note of their strengths and weaknesses (should you know them), and set off hunting. Unfortunately, this system also means that they’re more than likely to simply come across you while you’re in the middle of something else, interrupting a side-mission or accidentally stumbling upon you while on the hunt for one of their rivals. This gives the world a sense of life, with its inhabitants acting independently of you. No longer does the game have to abide by the dated notion that the player is the only character with agency, the only one that matters.

Smaller flourishes add to this, with each captain given a small window to call out the player upon seeing them, showing their face and title as they curse you out, or changing in appearance entirely based on their interactions with the player (gaining burn marks or scars from defeats, and upgrades to their armour from victories). In one scenario, I continued to encounter a captain who returned more ragged each time I defeated him, eventually ending up with a face entirely covered in what one can only assume were Tolkien-esque bandages. 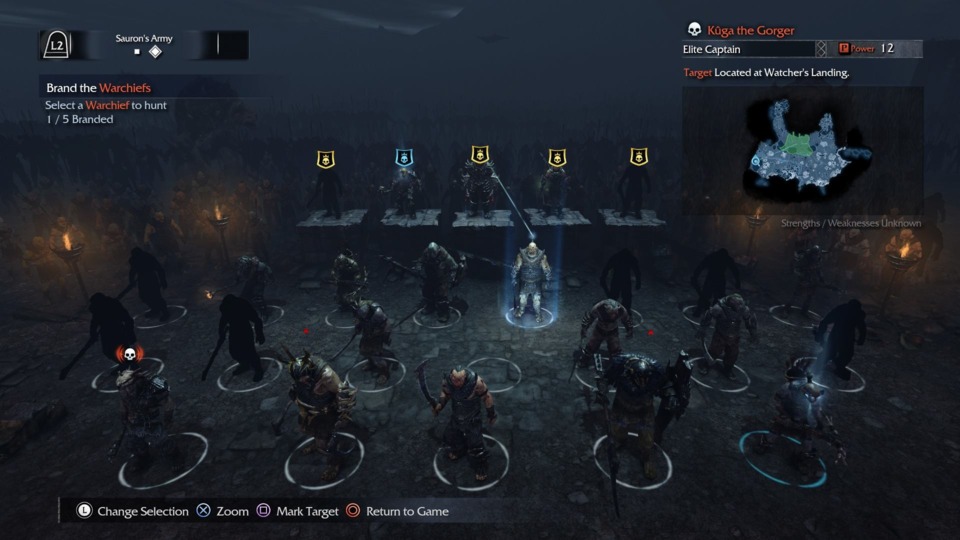 The game even dedicates an entire menu to the Orc hierarchy, allowing you to track your favourite (or least favourite) captains.

Through these tools, the game encourages you to develop rivalries and relationships with the captains you encounter, even incentivising it through the achievements/trophies associated with the game. In my play-through I continued to butt heads with one ‘Horza the Bleeder’, a senior lieutenant that defeated me so easily in our first encounter that he taunted my character before allowing him to leave with his life. After several more defeats, I decided to bide my time, waiting to build my character’s strength before taking him on again. Meanwhile ‘Horza’ continued to rise through the ranks until reaching the highest level of ‘Warchief’. Finally confronting him head-on, humiliating him in front of his soldiers, and intimidating him into becoming one of my character’s most trusted allies was an incredibly rewarding experience, and one that I had never felt in a more constrained, rigidly constructed game story. It reminded me of similar experiences crafting my own stories in more open-ended games, but with the style and presentation of a higher-budget experience.

That isn’t to say that Shadow of Mordor isn’t problematic though. The game fails to truly comment on the hypocrisy of freeing human slaves from their Orc captors and then subsequently enslaving the slavers through ‘branding’ them (the two protagonists discuss it briefly before quickly dismissing the issue), relies on the tired trope of treating the protagonist’s wife and child as simple narrative props, and doesn’t really develop the player character into anything more than a simple set of character motivations. Nonetheless, its implementation of personality-driven AI systems into a game with a shortage of personality allows for incredibly satisfying player-driven narratives around characters that would have been simply cannon fodder in any another game, and its a system that hopefully is co-opted into other franchises. While none of the many characters the game’s story introduces may stick with me, I’m unlikely to forget my time in Middle Earth spent with my virtual nemesis any time soon. To some, that may seem a failure, but to me, it’s a powerful achievement.