Shadow of War is the second game in the Middle Earth series, developed by Monolith Productions and released in 2017. This action role-playing game continues the story of the Gondorian ranger Talion and the elf lord Celebrimbor as they craft a new Ring of Power to combat Sauron.

Reception at launch was decidedly mixed, with the game being one of the first high profile releases which received significant push-back for its inclusion of microtransactions and loot boxes. These were removed in a free update in 2018, but the impression it left on the title still lingers, with a third game still nowhere in sight.

But how has the game faired all these years later and with the removal of its microtransaction systems, does it stand on its own as a good game? 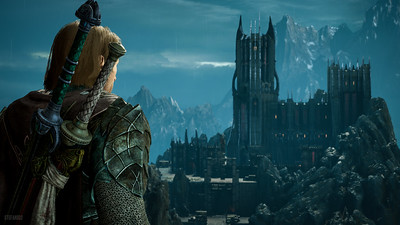 Much of what was loved before remains but its new systems are too few to demand such a high level of grind in later levels (Image: Stefans02 via Flickr with license)

Shadow of War plays much like its predecessor: Talion, alongside Celebrimbor, fight their way through hordes of Orcs, Uruks, Olog-hai and drakes to build themselves an army to rival the Dark Lord’s. They journey to different regions of Mordor to recruit Orcs with each region being distinctly different from each other.

The game’s ‘Nemesis System’ remains its true highlight. The system creates an intricate web of orcs, each with their own strengths, weaknesses and relationships to each other and who will react to decisions you make. Kill an Captain’s bodyguard and that orc’s blood-brother might ambush you in the wild. Recruit all of a Warchief’s Captains, and suddenly you have the means to take that Warchief’s fort from under his very nose. Turn your back on your supposed ally and you might have a mutiny on your hands.

It is incredibly rewarding to watch this system revolve around your decisions and creates some of the game’s best moments.

The game’s combat is fast with a hack-and-slash feel, with various skills being unlocked through perks which add further ways to approach a target. However, in large scale battles (which often take place in the endgame) combat devolves into button smashing with too many enemies attacking you at once with you being left with few ways to defend yourselves. It is fun for the first half of the game, but it soon begins to wear off its welcome.

This is also true of the new mechanic of raiding fortresses. This was heavily featured in the game’s marketing but it’s doubtful that anyone truly expected how central a pillar this system would be to the core game. You may have to raid the same four fortresses more than five times each throughout your adventure and this becomes tedious very quickly. What was initially a cool and novel feature becomes a chore as you need to continue raiding fortresses to unlock the game’s ‘true ending’. This ending is key to understanding one of the DLCs and so does not feel like an option but rather a requirement. 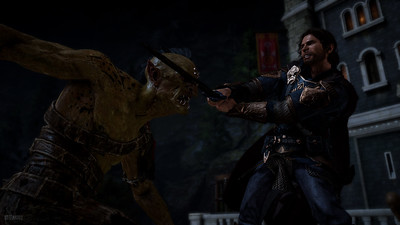 Combat is weighty and rewards skillfull play but does devolve into chaos at certain moments (Image: Stefans02 via Flickr with license)

Shadow of War’s story is the weakest component of this experience. The story is divided into four acts. The first does not set up a strong start, as Talion and Celebrimbor get caught up in the defence of a Gondorian city against raiding orcs and then caught in the web of the spider Shelob. The game’s poor start only slightly improves afterwards as we leave the relative safety of Gondor’s walls and venture into the wilds of Mordor.

It should be noted that the game draws heavily from Tolkien’s Legendarium but makes no attempt to portray itself as canonical. Whilst this should be acknowledged, it does create new problems.

In attempts to provide bigger enemies to fight, the game over-indulges and accidently makes a mockery of these supposedly ‘tough’ enemies. We face off against all nine of the Nazgûl and a Balrog on multiple occasions in scenes which feel out of place and have little connective tissue with the main narrative. It feels more like the developers had a check-list of the most famous characters in Middle Earth and tried to shoe-horn them into the game no matter whether it made any sense to do so.

The game does have a few good story beats, with Talion’s emerging conflict with Celebrimbor being one of them. Talion’s growing mistrust is encouraged by the new character of Eltariel, but these moments are so few and far between that by the game’s closing hours it feels hard to care for anyone or anything. 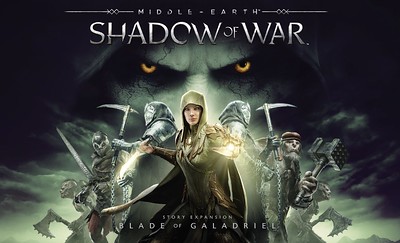 Shadow of War has two DLCs: The Blade of Galadriel and the Desolation of Mordor. Both are relatively small with a few hours of new content.

The Blade of Galadriel follows Eltariel after the final battle in the base game. She is commanded by Galadriel to recover the ring that Celebrimbor and Talion made and to continue hunting the Nazgûl – the reason she was sent to Mordor to begin with. The DLC has us encountering two ‘rogue’ Nazgûl who seek to dominate Middle Earth and new factions of Orcs that we must recruit in order to defend fortresses in the various regions. It presents several new combat skills as Talion’s wraith abilities are replaced with Eltariel’s power of the light of Galadriel, which is a nice switch-up, but overall it does nothing to surpass or improve upon the base experience.

The same can also be said for the second DLC. We follow the Gondorian Baranor, who is trying to cause havoc for the orcs. Unlike Eltariel and Talion, Baranor has no super-human abilities and death in-game resets the story progress. His DLC plays quite differently from what we’ve seen before, but unfortunately fails to make a lasting impression. 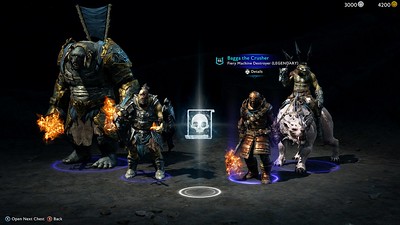 Shadow of War provides several hours of entertainment if one if prepared to look past its lacklustre story and occasionally button-mashing combat. It falls short of the success of its predecessor but is not wholy without its moments of fun. With Warner Bros. securing the patent for the Nemesis System in 2021 there is hope for a third game. It would be an incredible shame if a sequel never had a chance to redeem this battered series.