A game set in the bloodied, war torn city of Paris at the height of the French Revolution, Assassin’s Creed Unity (ACU) promised to be a game that pushed the franchise to new heights at the dawn of the next console generation. It was an ambitious project, but one that ultimately fell flat as its launch was nothing less than a disaster and one that arguably remains one of the most controversial entries for the franchise.

Word spread about the game’s bugs, with infamous glitches making the rounds on Reddit and Twitter. Multiple patches later and a free DLC release as a gesture of goodwill, and Unity’s story ended, with many thinking it was for the best.

But it’s been 6 years. Since then, AC has seen three releases, and with another right around the corner, perhaps it is time to give this game the chance it never got in 2014.

When I played Unity back at launch, I was lucky to not encounter many bugs. I had clipping issues and animation mix ups in combat but nothing like the game breaking glitches other players reported. Patches solved some of the issues, but players still report problems to this day and these issues are likely never to be fixed. Problems I experienced at launch are still here, but they did not disrupt the flow of gameplay frequently enough to damper my overall enjoyment. It is regretable that they still linger, but one must choose their battles wisely. The game is not perfect, but it is undeniable that more people have a smoother experience now than they did previously.

On a mechanical level, the game was ambitious. Paris is sprawling, with people crowding the streets, factions breaking out into fights organically, all while our protagonist is leaping from rooftop to rooftop with the parkour system that still engages today.

Parkour is realised with the player being able to traverse up and down the near 1:1 scale buildings on the fly. Combat is challenging with each enemy type needing different attack strategies and approaches. With the added feature of having two consumerables available at all times, players feel encouraged to play around with the combat system, finding a flow that works for them.

It goes without saying that ACU is astonishingly beautiful, despite being 6 years old. Unity holds its own against any 2020 release title, something that has no doubt extended this game’s longevity. The game’s model of Notre-dame being used to assist reconstruction efforts speaks for this game’s attention to detail.

But I’ve come to realise that the problem holding this game back is something that cannot be patched away. Gameplay may be a core pillar but story is what many of us play these games for. But the main story here leaves much to be desired.

The game follows Arno Dorian through the trials and tribulations he undergoes in his quest to avenge his father figure, the Templar Grandmaster Monsieur De La Serre. Aided by the Parisian Brotherhood of Assassin’s, he uncovers a plot that exposes the internal conflict between both the Templar Order and the Brotherhood. Mixed up in all this, is M. De La Serre’s daughter, Elise, who incidentally, happens to be Arno’s love interest and a Templar.

On paper, it has a compelling premise. But in practice, it is one of the most dull, bland and underwhelming plots of the entire franchise.

In a 2014 interview with TrustedReviews, Creative Director Alexander Amancio called Unity a “redemption quest”, which was also a “love story” that highlights the struggle between “love and duty.” But this is being incredibly generous, as the game does little to address these in any meaningful way.

At the beginning of the story, Arno fails to deliver a message to M. De La Serre, which warns him of a potential threat to his life. Arno then bares witness to his death at the hands of Templar dissenters, but since he is alone at the scene of the crime, he is blamed for the murder. Arno holds himself responsible for this death and believes he can find redemption through the Brotherhood by hunting down the Templars responsible. This is the cataylst for the entire game and it fails within the first two hours.

I find it hard to ignore how threadbare this premise is. Arno remains oblivious to the identity of M. De La Serre and Elise until his imprisonment after his arrest. How was Arno to know what that note contained, when he was kept in the dark about both Templars and Assassins? Elise was a Templar in training, so she understood the larger game afoot, but Arno was never given the same memo. Arno doesn’t need redemption, as he was not to blame for being ignorant.

Characters having faulty internal logic is not a bad thing, as it can serve a narrative purpose – so long as it is understood as faulty. But the conviction that goes unchallenged to Arno’s declaration of guilt and responsibility consitently pulled me out the experience and more often than not, made me roll my eyes. 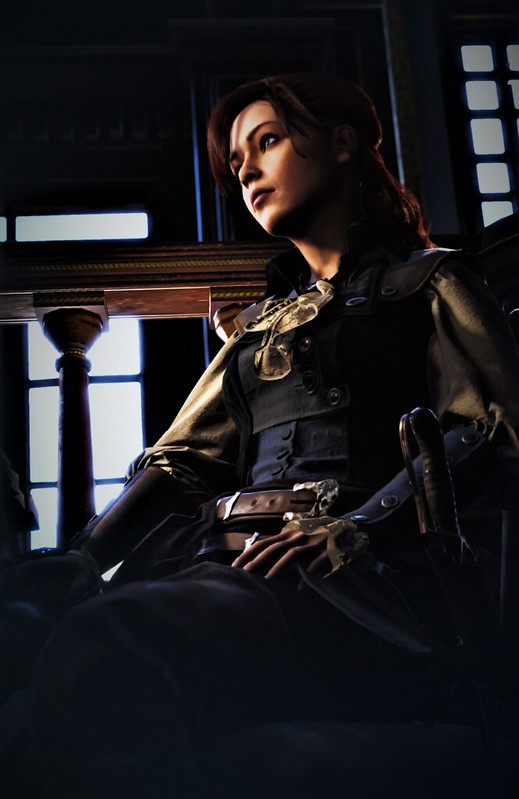 I could forgive this if the other element of this story was successful. But unfortunately, the love story also rings hollow. Elise is missing until the second half of the game, making her appearance jarring. Elise is a stubborn and head strong character, who desires to see her father avenged, even at the cost of her own life. Whilst Elise’s character is a breath of fresh air in a game which has few female characters, her arrival marks the downfall of Arno’s character arc. Arno’s love for Elise overshadows his entire personality, making him dull and entirely bland come the final act. Their interactions are entertaining, with quips and sarcastic remarks being bantered back and forth, but I felt no real chemistry between the two of them.

Calling this story a struggle between duty and love is debatable. Arno never chooses the Brotherhood over Elise, whilst Elise always makes it clear she would choose her duty over Arno. A viewpoint she maintains and results in her death. There is never a point where it appears one may deviate from their convictions, so all potential suspence is gone. Their romance has an empty and hollow ending – fitting a hollow and empty story.

Overall, Unity has improved from 2014 on a technical standpoint, with its parkour, addicting gameplay and city design remaining its standout features. But for me, Unity can never be ‘fixed’, as the story it wants to tell is a flawed and uninteresting one. It has poor set up, mediocre execution and an underwhelming conclusion. Its characters are one dimensional, lacking any tangible charisma that does not last for more than a few moments. It is a story lacking depth, which is a shame as Paris remains one of my favourite cities to run around in. Unfortunately, the story does not live up to its world, which is perhaps the biggest shame of all.