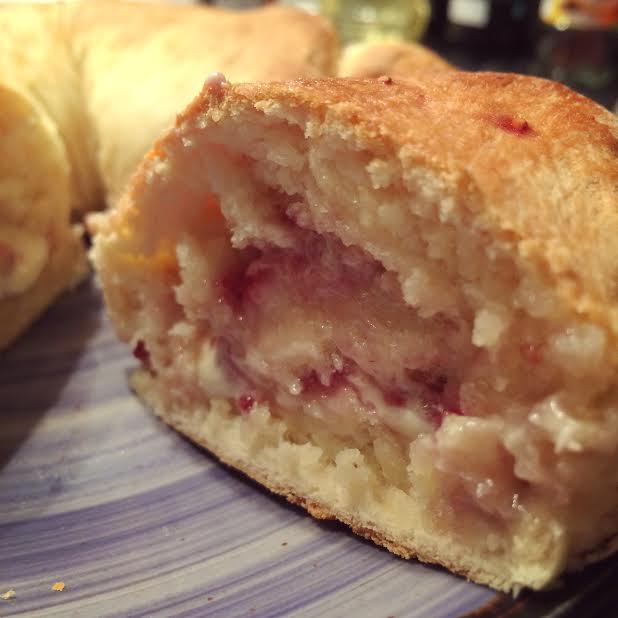 Loved this. I have tried it before with real raspberries but it went soggy so don’t be tempted to do that; using jam prevents this. Got inspired by a lawyer friend (Xiang) who was eating a white chocolate and raspberry muffin! Ellie was the first person to try it and it went down very well I think! Give it a go, it’s a very tasty way to procrastinate.

Pop the flour, yeast, sugar and milk in a mixing bowl. Now add the milk and stir with a knife – it will form a dough. Remove from the bowl and knead on a floured board until it become easier to manipulate (about 5 mins).

Now pop it in a bowl and leave in a warm place; this presents something of a problem because if you are in a student house in Durham in January warm places are hard to come by. So I put mine in the baking tin I planned on using, covered it with cling film and then lobbed it in the oven at a VERY low temperature for 5–10 mins. Then take it out and leave it on the side (we don’t want it to cook).

Not going to lie, I got bored of waiting after half an hour so I took it out of the tin, kneaded it some more then rolled it into a large rectangle. Spread a thin layer of raspberry jam all over then add pieces of chocolate.

Roll it into a sausage/Swiss roll along the long edge and curl it up in the baking tin. Spread a little jam on top (try to avoid having the seeds if you can).

Find this recipe on the Barking Baking website HERE