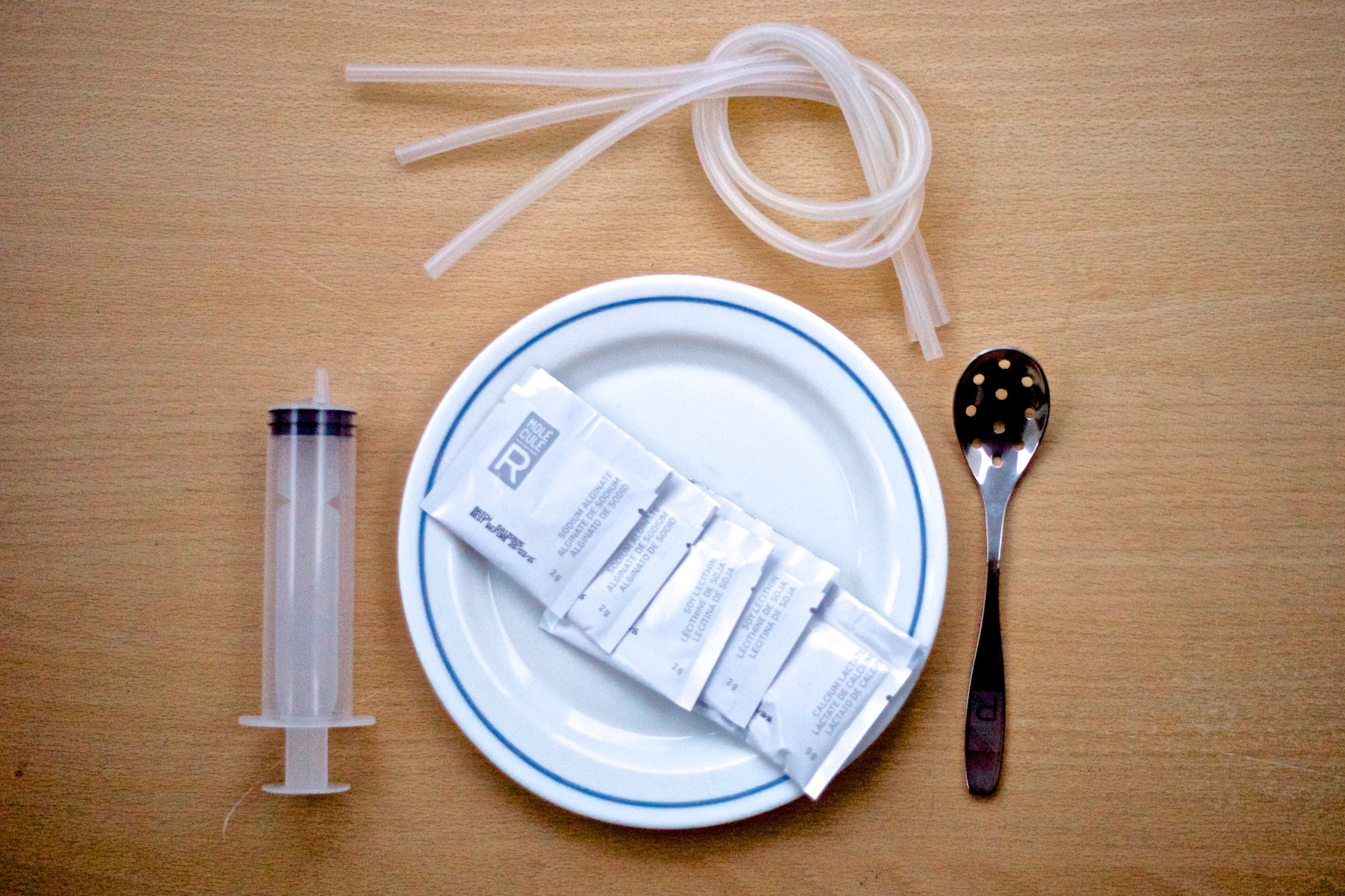 The tools of culinary science

As a budding scientist with a penchant for (fine) food, I have long aspired to emulate Heston Blumenthal’s feats in the kitchen. Despite my ambitions, 2013 was shaping up to be another unsuccessful year. Whilst I had mastered the art of fusion cooking (all about perfecting the ratio of green to red pesto), equalling Heston’s achievements was beginning to look like a distant prospect. I recognised I would have to develop my armoury, were I to realise my dreams.

In search of new technology, I stumbled upon a ‘Molecular Gastronomy Kit’: its array of syringes, tubes and chemicals appealed to me immediately. Choosing a Christmas present had rarely been so straightforward.

Christmas day: the wait was finally over. With a wide choice of what to make first, I decided to attempt apple-juice-spaghetti. This is based on a jellification technique, whereby (in theory) the apple juice is combined with agar-agar and then pumped into a thin tube. When the mixture sets, it is forced out the tube using a syringe, in the shape of spaghetti. The key problem involved forcing the spaghetti out of the tube after it had set. The model in the video seemed to apply the lightest of touches to the syringe, the spaghetti gracefully slipping out. But despite my toils, the spaghetti remained immobile.

I realised I needed to go bigger.

Emitting a war cry, I slammed the syringe onto the work surface; I was relieved to see it had been ejected, albeit onto the ceiling. Encouraged by this success, I had another attempt. After a series of struggles, I made steady improvements and was eventually able to direct the spaghetti into a bowl. Despite the grainy texture and uninspiring taste, I considered the project a triumph and pledged to try a new technique the following day.

My instructions claimed that “the reverse spherification technique is ideal to encapsulate a liquid into a large sphere that will explode in your mouth!” This struck me as the ideal platform from which I could test my fast-growing capabilities. ‘Drinkable’ natural yoghurt was suggested as an ingredient; feeling audacious, I opted for rhubarb yoghurt instead.

The technique is based on the reaction between sodium alginate and calcium lactate: a sodium alginate solution forms a gel when it comes into contact with the calcium lactate, creating a solid shell around the liquid interior. The first step is to create the sodium alginate bath: to fully dissolve the salt, the instructions recommend using an electric blender. This was arguably where my problems originated; not having a blender, I tried to dissolve the salt by hand – a fruitless endeavour. Drawing on my knowledge of IB Chemistry, I decided to heat the mixture to facilitate the process – success at last. Tragically, the solution had to cool to fridge temperature, so I prepared myself for a long wait.

My patience evaporated after an hour, and although the solution was far from ready, I decided to press on regardless. After an experiment to determine whether my yoghurt was drinkable was inconclusive, I added a dash of milk as a precaution. Stirring vigorously, I finished by adding the calcium lactate.

The time of reckoning had arrived. In principle, the yoghurt mixture is dropped into the bath and then removed a few minutes later as a perfect sphere. Armed with my spherical spoon, I began the operation, failure inconceivable. The first attempt yielded a shape not dissimilar to a sphere, but this was a case of beginner’s luck. Subsequent efforts were less impressive – and the final hurdle was yet to be cleared. My remaining optimism was extinguished when I tried to remove the blobs from the bath: upon impact with the spoon, they broke apart, their liquid interiors spilling out. The experiment had been a categorical disaster.

Stunned by this tragedy, I was at a loss as to where to go next. Emulsification – transforming a liquid into a “light and tasty foam” – looked like an easy way to regain my confidence. Sadly this also demanded a blender: I opted not to buy one on the grounds that I had already invested far too much in implements designed to help me play with my food. Disheartened by an apparent lack of options, I decided there was only solution –to go rogue. With a syringe in one hand and chemicals in the other, I was a man transformed; Heston Blumenthal with shades of Walter White. I had a simple goal: to mix all the chemicals together, and watch chaos unfurl.

Only a blender could have dissolved the chemical sludge that resulted.

Still wounded by the memory of my ineptitude, I’ve had no further experiences with my molecular gastronomy kit. However, there are many more chemicals and recipes to be explored. Should you be harbouring any masochistic urges, there are a number of kits knocking around (the one I purchased is http://www.firebox.com/product/5822/Molecular-Gastronomy-Kit). I also advise a blender.