I assume many of you, like me, have been keeping up with this season of The Great British Bake Off. Usually, when I endeavor to watch this progamme, I am perfectly content to simply revel in the contestant’s nervous scrambling to make a perfect baked good under immense time pressure. However, after watching ‘Bread Week’ a little while back, I was overcome with the desire to make bread myself. Something I had never done before.

The specific bread that caught my eye and caused my craving was made by Laura. Although her pancetta and cheese stuffed focaccia had its flaws, I knew from the second I saw the judges all having a taste that I needed to make one for myself. Because I knew I could not make an intricate bread plaque like she did and have any success, I opted to go for a more simple focaccia. While I omitted the cheese and the fancy design of Laura’s bread, I decided to still use the pancetta, because I have never heard of a time when using salty and delicious pork has ever made anything worse.

Although this was my very first time making focaccia, I found the process to be surprisingly easy. The main thing to remember is to have patience and follow the instructions very exactly. The recipe I chose is a very simple one from BBC Good Food, which requires only six ingredients: strong bread flour, fast action yeast, salt, olive oil, flaky sea salt, and fresh rosemary. I was a bit nervous before starting the recipe as I have attempted to make foods requiring yeast before that have gone terribly wrong, but I was hoping that this time would be different.

To start out, place 500 grams of the strong bread flour (can get for very cheap at Tesco) into a large bowl. It is important to use quite a large bowl in order to ensure that this next step is done correctly. To one side of the bowl, mix in seven grams of the dried fast action yeast into the flour, making sure that it is thoroughly mixed with it but not spilling over into the other half of the bowl. Then, on the opposite side of the bowl, mix two teaspoons of salt into the other half of the flour. It is very important to keep the yeast and the salt separate at this stage so that the yeast does not become deactivated. After each ingredient is mixed in well with the flour separately, you may mix everything together.

Next, you will want to make a well in the middle of the flour mixture and pour in two tablespoons of olive oil and between 350 to 400 milliliters of lukewarm or tepid water. It is important to make sure the water is not too hot or too cold, either getting slightly warm water from your sink or getting water from your kettle before it boils over are good ways to go about this. How much water you add will depend, add enough so that you have a slightly sticky dough, but one that you could still fairly easily pick up and place onto a floured surface. After dong this, you will need to knead the dough for five to ten minutes until it becomes soft and less sticky. This is where the patience comes in, folding a piece of dough over and over can become tedious and frankly very tiring for your forearms, but it is essential for having a mouth-watering and delicious focaccia.

Once you are done kneading, place your dough in another large bowl and cover with a tea towel. Leave this in a warm place for one hour to let the dough rise. The recipe says to oil a rectangular tin for the bread, but all I had was a round cake tin that I used and which turned out just fine. Stretch the dough out just a little bit so that it fills out the tin. If you are thinking that you finally get to pop that bad boy in the oven, you are wrong. Because you are going to need to cover the tin with a tea towel and let it rise again for another 35 to 45 minutes.

Whilst the dough is rising a second time, preheat the oven 220 degrees Celsius, or 200 if you have a fan oven. Once the dough is finished rising, you may commence what is arguably the most enjoyable part of this entire process. To make wells in the top of the dough, press your (clean) fingers into it, making sure there are holes evenly all over the top. After mixing together one-half tablespoon of olive oil with one tablespoon water and a couple pinches of flaky sea salt, you may drizzle this over the dough so that the mixture settles into all the indents you have just made. After this, take the fresh rosemary and push the sprigs into the dough, making sure they are somewhat secure. If you wish to use pancetta like I did, simply take your pre-cut small pieces of pancetta (can be found in Tesco) and fry them up on the hob until they are cooked through, and then pour them over the dough, pressing them in slightly. 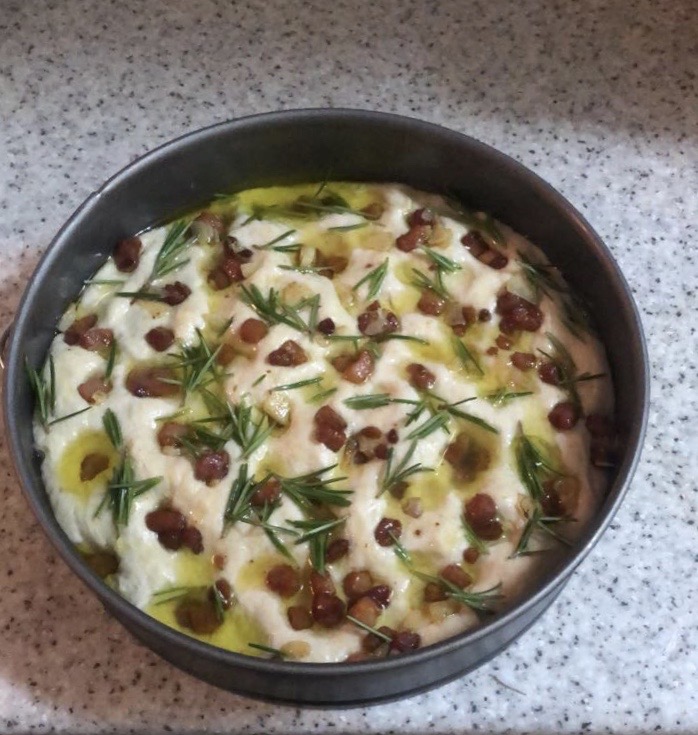 Finally, the moment has come where you may pop that bad boy in the oven- leave it for twenty minutes, enjoying the wonderful smell of pancetta, and rosemary. Once the focaccia is out of the oven, you may enjoy it immediately. I was very pleased with this recipe and found it to be very user-friendly, and am glad that I was able to feed my craving I had been having since watching The Great British Bake Off’s ‘Bread Week.’ 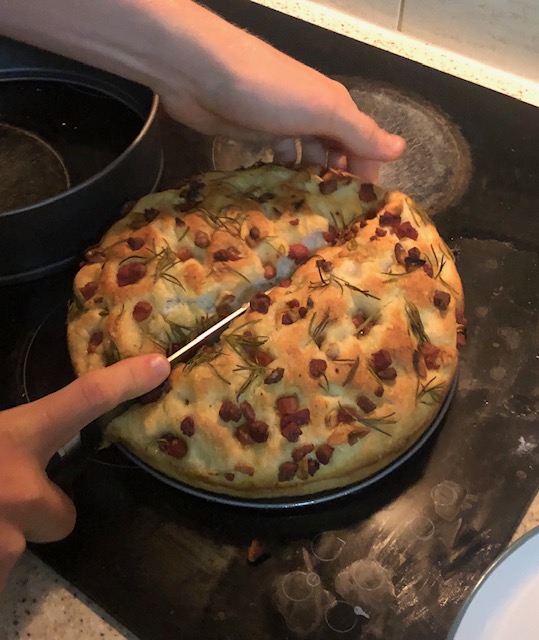