A beginner’s guide to Birria

As a devoted and enthusiastic Mexican food lover, I figured it was about time I attempted to make Birria. Birria is a stew that originates from the Jalisco region of Mexico, and quite possibly one of the most delicious dishes on earth. After seeing countless Tik Toks and Instagram reels showing peoples’ renditions of the Mexican dish, I could not wait to give it a try myself. Although it is a long and fairly complicated cooking process, I believe the end result is more than worth the effort. With a combination of spicy, sweet, savoury, rich and hearty flavours, it is the perfect dish to make for a family dinner or really just whenever you are due for a bit of delicious comfort food.

In order to make this dish, you will need quite a few ingredients. For my first attempt at making Birria, I used this recipe from Feasting at Home to guide me. First off, you will need any meat that is good for making stews. Traditionally, Birria is made with goat meat, but I opted for beef, using a cut of topside beef as well as a sirloin steak. You will also need a few cups of chicken broth, the recipe calls for two cups, but I found I needed to use a lot more in order to keep the meat adequately hydrated and retain the ‘stewy’ consistency of the dish, I would say make about five to six cups of broth. A very important ingredient to buy for this dish is dried chilies, I used dried Ancho chilies and they worked great, you can find these at Waitrose or, if you are in Durham at the moment, Robinson’s on North Road has a great selection of dried chilies. Next, you will need a large, diced onion, about six chopped cloves of garlic, and a can of chopped tomatoes. Three tablespoons of either white or apple cider vinegar, a tablespoon of dried oregano, two or more bay leaves (I personally always use more bay leaves than is recommended), and salt, pepper and olive oil to taste or as needed, as well as a spoonful of honey.

You will also need a range of whole spices to toast and blend together. If you do not have access to whole spices or a spice blender, I recommend opting for normal, ground spices and working with them as you would with the homemade blend. The spices you will need are a cinnamon stick (or ground cinnamon), about six whole cloves (or ground ones), two teaspoons of coriander seeds (or…. You know what you probably get the point by now), a teaspoon of cumin seeds and about a dozen peppercorns.

There are other optional ingredients listed in the recipe that you may use, but I figured this list is already quite extensive and will yield a fine result for one’s first attempt at making Birria.

To begin the cooking process, you will want to season all your meat with salt and pepper and then set it aside as you prepare the sauce. To begin making the sauce, take your dried chilies (you will want to use about four, this is how many I used and the sauce was not too spicy at all) and break them apart in order to remove the seeds and stems and them toast them in a dry frying pan until they are fragrant, this should be just a couple of minutes. You then want to put these toasted chilies in a pot with about two cups of your chicken broth, bring this to a simmer and then turn off the hob and let the pot sit, covered, for twenty or so minutes. Meanwhile, either toast your whole spices in that same skillet (the cinnamon, cloves, cumin, coriander, and peppercorns) for a couple minutes, or blend together your pre-ground spices, and set this aside. 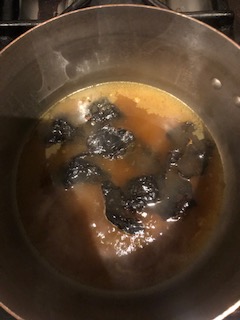 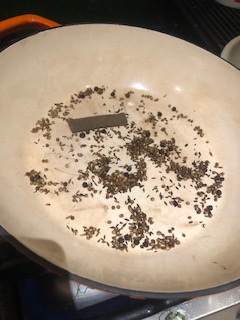 Next, get out either a pressure cooker or a large pot or Dutch oven, and put in a couple splashes of olive oil and your chopped onion and garlic. Stir until the onions and garlic are golden before adding the can of chopped tomatoes, letting this mixture sit for a few minutes. Next, add the vinegar, oregano, cinnamon and bay leaves, stirring them in until fully mixed, and then turning off the hob. Next, take the chili and chicken broth mixture and add it to a blender or food processor along with a cup of the tomato sauce mixture you have just made. Holding the lid on the blender, mis until the sauce inside is smooth, and the pour it into the pot with the rest of the tomato mixture, stirring until all mixed together. Finally, add the meat into the pot and make sure the sauce coats it completely. If you are using a pressure cooker, set it to 45 minutes, and then release the pressure and shred the meat with two forks (the meat should be very tender). If you are using a pot or Dutch oven, either simmer on the hob or place it in a 180 Celsius oven for three hours. I chose to cook it in the oven, and after checking at the two-hour mark found that much of my sauce had reduced and was getting a little dry, so I added about three more cups of broth and set it back in the oven for about another thirty minutes. I found that the meat was fully cooked after two and a half hours, and so shredded the meat and mixed it in with the sauce thoroughly. After you have shredded the meat, mix in the spoonful of honey. 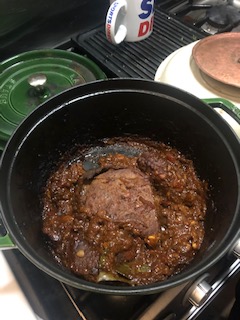 That concludes the cooking process for Birria! A little long and complicated but worth every ounce of effort. To serve, either have the stew along with a side of rice and salsa or use it as a filling for tacos and add any toppings of your choosing. I hope this may serve as a comprehensive guide for those wishing to make Birria for the first time. Enjoy! 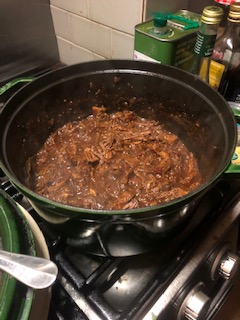