As Hong Kong enters its sixth continuous month of protests with no clear end in sight and increasing violence already claiming the lives of a number of protesters, as well as injuring many more, calls for international involvement and help are getting louder and louder. Just recently, the United States Senate accepted a revised version of the Hong Kong Human Rights act, that will soon be presented to President Donald Trump for approval, which aims at protecting freedoms in Hong Kong in the present situation.

In the UK, a number of universities, such as Warwick, Kent or Edinburgh, have already called back their exchange students amid growing safety concerns. In light of all this, where does Durham stand?

The university has made it clear that it encourages free speech regarding the issue, allowing the wear of masks, as well as peaceful demonstrations. The Student’s Union has also showed support by creating a Lennon Wall, where people can post messages of solidarity.

Most recently, a group of students have organised a peaceful demonstration on the 20th of November, between 10-14, in front of the Bill Bryson library, trying to raise international awareness about the situation in Hong Kong. In order to find out more about their aim, we have interviewed some of the students in the demonstration about their opinion on international involvement, violence in the protests, as well as what solution they envision.

Q: Why is raising international awareness so important? In what way it can affect the protests?

A: The need for international awareness is increasingly important because the power of the people of Hong Kong is getting weaker and weaker in the face of the authoritarian government, and they are less able to face the oppression and violence they are subjected to. Therefore, we need outside help in order to implement the Five Demands. 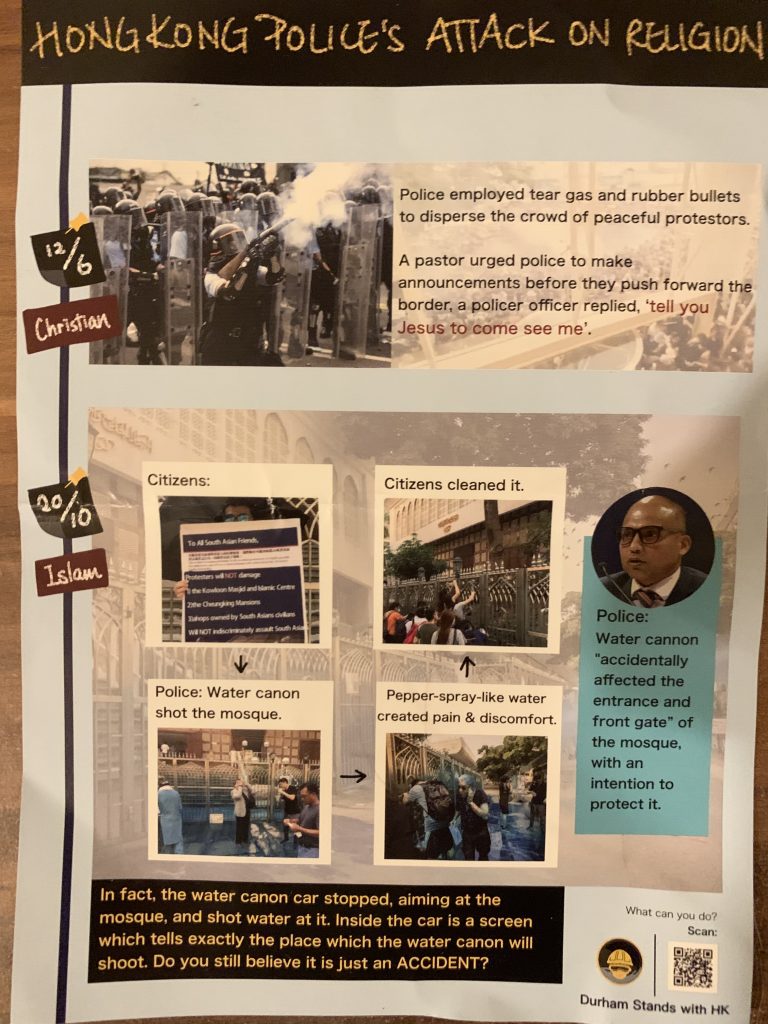 Q: What do you think of the recent US Hong Kong Human Rights act?

A: While it is an important stand taken by a great power, I am not sure how it could actively help the protesters in the deadlock situation they are in right now. However, it could be a good start that can bring awareness and maybe more involvement.

Q: How do you think the increasing violence has affected the moraleand the number of protesters?

A: Nothing can scare Hong Kong people! I think, even though the risks to personal safety and integrity are becoming bigger, the morale and the determination of the people is still very strong, which just shows how important the Five Demands are for the citizens of Hong Kong. However, with police arresting more and more people, it might be possible that the number of protesters will decrease.

Q: What is the first step towards a resolution of the conflict? Do you think a peaceful solution is still in sight?

Regarding the next step, it’s definitely a cool down on the violence and arrests, no progress can be made by either side if that does not stop. So essentially, it all comes down to the government to uphold the basic law and accept the five demands, there is no middle option.

Q: Is the main goal of the protests still the implementation of the five demands, or do you think it may have moved towards a full independence movement?

A: Just the five demands! To be organised according to the basic law. 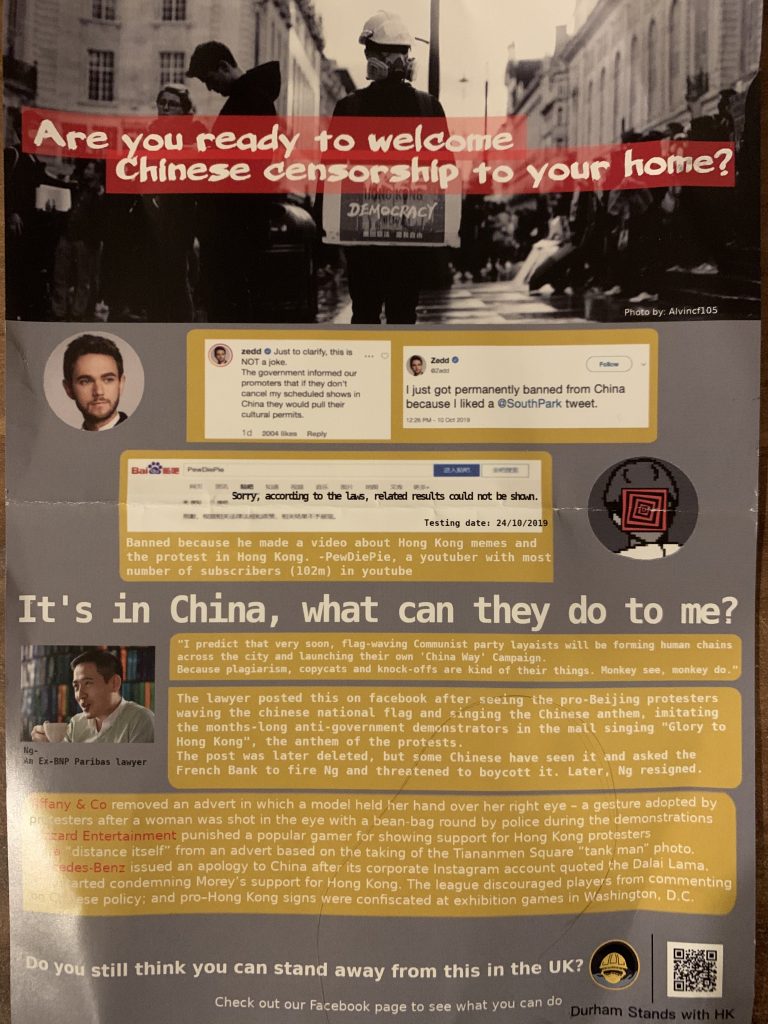 Q: Finally, do you have any friends or family protesting at home? Have any of them been hurt or arrested?

A: We have a lot of friends fighting, luckily, none of them have been hurt or arrested yet. But the oppression is getting so bad, that you never know who is next, it might as well be them.

Equipped with informative flyers, banners and open for discussion, the demonstration has clearly brought more awareness of Durham students to the protests. For more information and timeline of the protests, you can read https://www.thebubble.org.uk/current-affairs/world-affairs/2019-hong-kong-protest-past-present-and-future/