Roommate 101: A Guide to Keeping the Peace 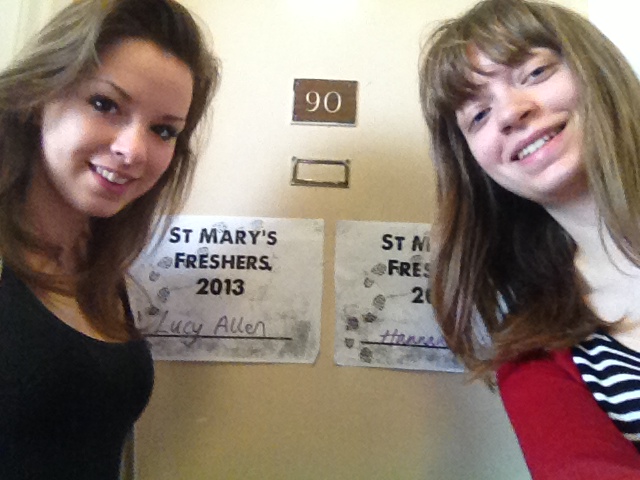 Lucy and Hannah: The calm before the storm

Picture the scene: scrounging in the pitch black, overcoming obstacles in the surrounding darkness, time is running out, breath quickening, terror rising… Where is the other damn slipper? Such is the morning routine of the roommate with early morning lectures, whilst your fellow room sharer slumbers like a male lion amongst his pride of pillows and afternoon lectures. The quest? Get ready for lectures, but Don’t Wake The Roommate. The prize? A mildly surprised comment from your roommate claiming she didn’t even notice you leaving. The consequences of failure? All day grumbling, pointed yawning, a dull pricking of the conscience and being guilt-tripped into funding their Dorito addiction. Deep is the fear for future financial prospects as your roommate munches their way into your overdraft due to your heavy footfall and awful night-vision. I myself remember the first time I failed this most difficult of early morning challenges, trying to pull out a folder from a top shelf, with plastic cocktail glasses balanced precariously close to it. A foolish mistake, made clear by the clattering rain of pink plastic. Many apologies were made, many Doritos consumed. The horror.

Of course, there are many methods that can be adopted to solve this dilemma of the dawn. You could adopt the “I Am The King Of This Room” method, through switching all main lights on and pointedly brushing your teeth with your rather loud electric toothbrush in their face. However, this method cannot be recommended, as the balance of room politics tips into chaos, with any form of diplomacy exiting the room as swiftly and loudly as your GHD hairdryer dries your hair at 7am. Unless you want said hairdryer to mysteriously disappear, perhaps another method should be adopted. No, I would not recommend force-feeding your roommate sleeping pills or drugging them; this can only lead to awkward questions and inexplicable blood test results.

You could, of course adopt the “I’ll just go to lectures in my pyjamas” option, a firm favourite of mine. Of course, I did this when I had a single room anyway. To be avoided if you want to in any way appear like you take your degree course seriously.

There’s also the unavoidable issue of the alarm clock. Nothing can be done about this. Just hope that mercy will be given and punishments will be swift.

Of course, there are two sides to every story, and two roommates to every shared room. So what’s it like being the roommate with the lucky lie-ins…?

I would say that it’s remarkable how many times my roommate can hit the snooze button if it wasn’t so annoying. She really should win some sort of award. From unreasonable o’clock in the morning (as if she would ever get up at 7.15!), the beep of her alarm pierces my sleep; she hits snooze, blissfully unaware of her alarm’s sudden intrusion into my already fragile sleep pattern, and continues her slumber as if nothing has happened. Within four minutes, I have managed to get back to sleep, ready to wake up refreshed in a few hours for my 11am lecture. Within five minutes, the alarm sings its smug wake-up call and the cycle begins again. Just as I’m beginning to wonder if she’ll ever move from her duvet cocoon and make any kind of effort to get to Elvet Riverside within the Durham hour, she emerges, bleary-eyed and sporting a rather interesting hairstyle.

If I were ever alert enough at this time in the morning to notice, I’d find my friend’s mildly frantic scramble for socks quite amusing. When she has to cross to my side of the room to find her socks, tripping over shoes, books and yesterday morning’s mug of tea (still half-full) in the process, it’s not so hilarious. Not to mention the frustrated slamming of drawers when she realises that she hasn’t got any clean socks for the day. No doubt I’ll be dragged to the laundry room later to help carry her washing.

It’s a wonder she ever has time for a morning shower, but somehow she manages it. I’m kindly alerted to this fact by a sharp slam of the door upon her leaving and re-entering the room, followed by the incessant roar of her hairdryer. At points like these, I’m generally either questioning my sanity or wondering if our neighbours are plotting against us yet.

When my roommate has finally finished pulling on her skinny jeans (and nearly falling over in the process), applying her make-up using the blindingly bright light above the sink and cursing the time as she throws books into her bag, she leaves. I am free to sleep at last.

Five minutes later and there’s a knock at the door. It’s a college mate asking, “Do you want to come to breakfast with us?” Somehow, I never do.