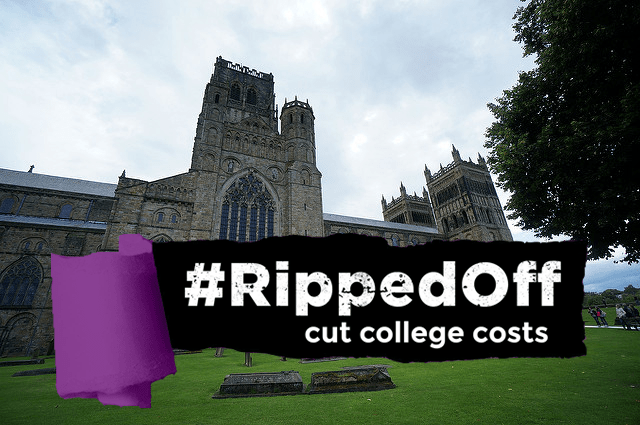 After Durham University’s announcement of a 3.5% accommodation fee increase the #RippedOff campaign is holding a ‘de-matriculation’ protest at 15:30-16:30pm today on Palace Green.

Since the university’s announcement of the rise in costs on the 10th October the JCR Presidents of all 15 colleges and other noteworthy student leaders have expressed support for the #RippedOff campaign and condemned the action.

Durham City Parish Council has also unanimously voted against the rise in fees in conclusion to a meeting held yesterday.

#RippedOff campaign officials have released this statement with the support of the following student officials:

On Wednesday 10th October, Durham University announced that it will be raising its college fees by 3.38% for the 2019/20 academic year. This is in spite of the representations that have been made by the student body for a number of years, which have made clear that the college fees are too high and are pricing prospective students out of a Durham education. We believe this latest fee hike will only serve to further damage our college and student communities in Durham, going against the values which are core to the University.

As Junior Common Room Presidents and Students’ Union Officers, we speak on behalf of students across Durham in condemning the extortionate college fees. We must be united in holding the University accountable for its actions, which are having a detrimental impact on everyone throughout Durham.

We are calling for all our members to join a ‘De-Matriculation’ rally on Palace Green beginning at 3.30pm on Friday 26th October. We want the rally to be the biggest protest against college fees to be held in Durham, in order to show the University the strength of feeling about this attack on our communities.

We are demanding: a) an immediate freeze to be applied to Durham University’s college residence charges b) an increase in the financial support Durham University provides to students from low and middle-income households.

We hope you will be able to attend and de-matriculate with us,

Today’s protest follows other #RippedOff events such as a satirical Play Your Cards Right hosted outside the Bill Bryson library and yesterday’s meeting with Durham City Parish Council seeking support from local residents.