This World Cup has a similar energy about it as London 2012. Our Lionesses are inspiring a generation to lace their boots and take up the beautiful game. The buzz is palpable as the murmur of ‘it’s coming home’ lingers in the background of sporting conversation once more. Honestly, I’m just thrilled I can expect to watch the Lionesses in the comfort of a pub, but there’s something overshadowing this watershed moment in women’s sport.

One of the main talking points of this tournament so far has, of course, been the use of the Video Assistant Referee (VAR). This technology allows referees to review key decisions – possible goals, penalties, offsides and direct red cards – and its introduction to Football in 2016 was widely welcomed as a long-overdue advancement in the sport. Besides, dodgy decisions by referees have always been a talking point for the disgruntled, perpetually crestfallen England fan, so what’s the big deal with another questionable decision-maker? 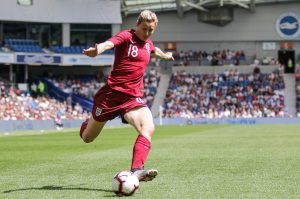 Ellen White in action for England

Well, the issue in this World Cup seems to be how VAR is being used, and that it’s highlighting some controversial new laws from FIFA. A couple of key VAR decisions spring to mind. In Scotland’s final group game against Argentina, Scotland goalkeeper Lee Alexander saved a penalty in added time, but VAR ruled she moved off her line and recommended a retake. Florencia Bonsigundo netted the penalty second time around and completed a remarkable comeback for Argentina, which saw Scotland on the first flight home.

A similar decision was made in France’s final group game against Nigeria. Wendie Renard’s casual 79th minute penalty hit the post but was retaken – and netted – after VAR ruled that Nigerian keeper Chiamaka Nnadozie had moved before the penalty was taken. France topped the group with this 1-0 win, and Nigeria were left waiting to see if they would qualify for the last-16. They did qualify in the end but crashed out of the competition after a 3-0 loss to Germany, who were awarded a penalty after a VAR review.

The key issue in these cases isn’t necessarily VAR, it’s FIFA’s changes to the rules. As of June 1st, a penalty can be retaken if the goalkeeper moves off the goal line before the kick is taken; they’re allowed one foot off the line, but not two. These VAR decisions were entirely correct according to the new laws, so perhaps it’s the new laws we should be taking issue with. Admittedly, it does seem unfair that penalty takers are allowed to stutter, dance and make a brew in the run-up when the goalkeeper is yellow-carded for even the smallest encroachments.

FIFA have been criticised for using women’s teams as guinea pigs for VAR and new rules, but this is an unfair charge. It’s routine to introduce amendments to the rules on June 1st – in time for summer tournaments – so the Women’s World Cup is hardly being used as a testing ground.  What can be criticised, however, is the tendency to use VAR as a comfort blanket. Former England defender Laura Bassett made this point on BBC Two when Germany were awarded a penalty in their last-16 tie against Nigeria, after a VAR review.

“We were at the other end of the pitch and it was clear to us it was reckless and obviously a penalty. It is not good enough. That is not what VAR is there for. It is not the game we all love.”

If referees are in good positions they shouldn’t need to consult VAR for every possible penalty, so the over-use of VAR raises questions about the competency and confidence of World Cup referees. Looking to VAR for obvious decisions kills the momentum of the game and wastes unnecessary time. The technology is supposed to be used to correct obvious errors in judgement, and decisions should be reached after around 80 seconds. In this tournament we’re seeing delays of four, five, even six minutes before a penalty can be taken – that’s not good enough. If the decisions are taking this long then they’re clearly not obvious mistakes to be corrected, and thus not VAR territory. 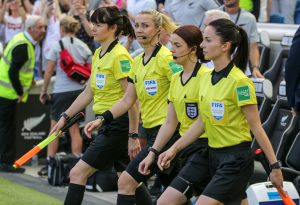 The officials in England’s World Cup Qualifier vs. New Zealand

The interpretation of the offside rule has caused even more controversy. Seeing as women tend to be the butt of all jokes about not understanding the offside rule in the first place, this is somewhat dismaying. In the USA’s final group game an own goal from Sweden defender Jonna Andersson was allowed to stand even after a VAR intervention. Carli Lloyd was in an offside position in the build-up, and despite seeming to impede another defender’s ability to clear the cross, the referee allowed the goal.

This infuriated Manchester United Women manager and BBC pundit Casey Stoney, who said she “genuinely can’t understand what is happening in this tournament”. For her it’s clear – “the run and action of the attacker is affecting the decision making of the defender”, so Lloyd was impeding play.

The controversy surrounding offside decisions brings us back to the same problem – competency and confidence of officials. At a World Cup the referee’s final decision should not be so widely disputed, especially not now that VAR is in place. A similar decision in Germany’s last-16 win against Nigeria – subject of two VAR scandals – caused Stoney to doubt the ability of the referees.

“I think it is poor refereeing. It’s the interpretation,” she argued. “Anything that is interfering is offside. We had another stop of over two minutes and we still didn’t get the right decision.”

The fact that VAR is dominating discussion of the World Cup is infuriating, but these conversations need to be had. VAR is here to stay, but it doesn’t have to be the enemy. It can make the game cleaner and it has the potential to make it less controversial; players can get away with less now, and video replays from multiple angles ought to be indisputable. With this in mind, players ought to think twice about amateur dramatics displays. When used to correct obvious mistakes, VAR is a blessing. When used as a comfort blanket, it’s suffocating. Whether or not FIFA take this experience on board and make changes, only time will tell.