A brief history of women’s football

Anyone would be forgiven for thinking that women’s football never has or never will be quite as ‘good’ as the men’s game. As is the case with most sports, the men’s version is afforded more coverage, publicity and funding than the women’s equivalent, but women’s football has convention-defying history that spins a rather interesting tale. The Lionesses of today truly stand on the shoulders of giants.

England’s Lionesses finished 3rd in the 2015 World Cup and inspired a generation of girls to lace up their boots and get stuck in. As someone who hadn’t played a game of football since the lawless carnival of the primary school playground, I knew that when opportunity knocked, I wanted to join a proper football team. Growing up I couldn’t name a single female footballer in the England starting XI – incidentally I probably couldn’t do more than five keepy-ups either – but things are changing. My keepy-up ability has improved (marginally) too. Now, walking past the pitches at Maiden Castle, I notice teams of young girls with more skill and flair than I could ever have hoped to possess at ten years old. And if I were at primary school in 2019, I don’t think I’d be the only girl playing football with the boys. It seems that all we needed were a team of positive role models who we could relate to – something the boys have had their entire lives. 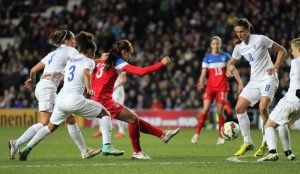 So why is women’s football only just beginning to enjoy popularity? You’d think that a footballing nation like our own would have everyone, man, woman, child, or anything in between hooked on the beautiful game. The truth is, this present popularity is not so much a surge as a resurgence. To understand why we are where we are, we must look back in time to one of the earliest known women’s football teams in England.

Dick, Kerr Ladies F.C was formed in 1917 in Preston, Lancashire (subtle brag: my hometown) as a works team for Dick, Kerr & Co. Upon the outbreak of war, the paint factory became a munitions factory and during a period of low productivity, the factory girls joined in the men’s game of football during their tea breaks, and found they were rather good. So began the incredible rise of an accidental ‘Munitionettes’ team.

On Christmas Day of 1917 the Dick, Kerr Ladies attracted crowds of 10,000 for a 4-0 victory against Coulthard Factory at Deepdale, and they went on to play dozens of charity games to raise money for injured servicemen. This game alone raised over £600 – around £50,000 in today’s money. The Dick, Kerr Ladies took the country by storm, even taking part in the first ever officially recognised women’s international fixture against France in 1920. After touring France, the Dick, Kerr Ladies drew their largest ever crowd: 53,000 at Goodison Park on Boxing Day, 1920. To lend some perspective, this record was only broken when Team GB’s women beat Brazil in the London 2012 Olympics. 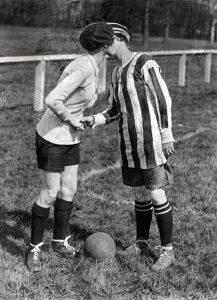 Less than a year after this record-breaking crowd, the Football Association effectively banned women’s football by requesting “the clubs belonging to the Association refuse the use of their grounds for such [women’s] matches”. So that was that. Women’s teams could no longer train or play on FA governed grounds, forcing them to stage games on poorer-quality grounds with far smaller capacities. Concerns were raised about the suitability of the game for females and as such, the powers that be decided that women should not be encouraged to play football. Naturally, the women of the 1920s could hardly expect to be able to vote and play football.

The ban stayed in place for fifty years, but the Dick, Kerr Ladies’ manager Alfred Frankland was adamant that the women’s game should continue:

“The team will continue to play, if the organisers of charity matches will provide grounds, even if we have to play on ploughed fields”

The team continued to play on non-FA grounds and even toured North America. After playing nine American teams they arrived in Canada only to be told that the Dominion Football Association objected to women football players, so they played men’s teams instead. Their record was admirable, winning three games, drawing three and losing three. They even gave the Canadian national champions a run for their money. Alas, the halcyon days would always be their wartime successes.

It wasn’t until 1971 that the FA officially recognised women’s football, and it was only in 1993 that the FA took control of the administration and funding of the women’s game. Today, there is still a huge disparity in pay and airtime at the highest levels, and it’s far trickier to find coaches at the grassroots level.

But if women who didn’t even have the right to vote can draw crowds of tens of thousands, then you can bet the girls of today can. Even if we have to play on ploughed fields.