The Times They Are a-Changin’ 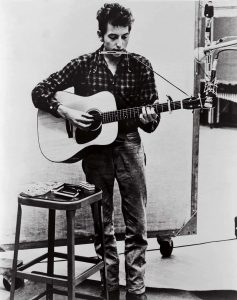 As Jacques Attali notes, music is freedom. It is the voice of the people and is an important instrument of power. It can inspire men to rise-up, hand in hand, in solidarity. Throughout history it has been used as a platform to express the political views of the unrepresented, giving the mute a voice. In line with this, I want to discuss the appearance of left-wing ideologies in western folk music and their inspiring qualities.

Folk music possesses the mystical quality of timelessness, connecting souls together from all walks of life and breaking all generational barriers. It is accessible and simple. Any one from a famous Rockstar to your average Joe factory worker is free to pick up an acoustic guitar and strum away a little American melody. By its very name, it is the music of the people, from the people themselves. It is perhaps because of this reason that western folk music is busting to the seams with Left inclined songs promoting solidarity, sung from the point of view of hard-working blue-collar characters. Musicians like Woody Guthrie passionately wrote socialist anthems in a changing 1930s America. He famously wrote the song ‘Jesus Christ’, explaining that Jesus would have been crucified by modern day capitalists for being an advocate of wealth disruption. His songs often warn against greedy, fat cat businessmen and hails the hardworking lives of the deprived working class.

Guthrie has since become a legend in the political-music genre, being hailed as one of the most influential songwriters of all time. Pete Seegar, a keen socialist, was heavily inspired. His song ‘Solidarity Forever,’ borrowing its infectious melody from an American Civil war song, champions the collective power the proletariat possess. It is hard not to feel a sense of collectiveness as the harmonised chorus calls for solidarity. Seegar’s adaptation of the traditional song ‘Which Side Are You On’, asks the listener to pick a side in the fight for the eradication of working class exploitation in the working arena.

From Seeger, comes Billy Bragg: A politically charged cockney lad, famous for singing out against Thatcherism throughout the 1980s. His harsh distorted guitar and sharp working-class accent heighten the acerbic edge of his polarised lyrics. In his provocative song, ‘Between the Wars’, he questions the government’s choice to invest in military institutions, rather than lending a helping hand to those that need it within the country. His inspiring record ‘There is Power in a Union’ has become an unofficial anthem for the Labour party. In it he praises the work of unions and calls for the workers of the world to unite together as one.

You could not write an article on left-wing politics in music without mentioning perhaps the most provocative political singer-songwriter of all-time: Bob Dylan. While shying away from the socialist, counter-culture folk singer image he perfected in the early-1960s, his highly critical and often abstract poetic lyrics remain relevant and fresh.  The song that, justifiably, propelled Dylan into stardom was ‘Blowing in The Wind’. Based on the melody of an old slave tune, Dylan asks the rhetorical question: when will we achieve freedom, peace and justice in our society? Its simplicity strikes deep. The answer to our issues is right in front of us in the wind, but it is constantly fluttering out of reach.  Dylan’s famed anti-war song ‘A Hard Rains A-Gonna Fall’, released during the height of the Cuban missile crisis, congers up images of a dystopian world ravaged by human destruction, borrowing much of it’s imagery from Revelations in the Bible. With American-Korean tensions high, this work is hauntingly relevant. Dylan propelled himself to Shakespearian levels with his song, and much quoted phrase, ‘The Times They Are a-Changin’. The song acts as a warning to those who comfortably sit at the top of the food chain, ignoring social issues, when he sings “The first shall be last”. The rapidly changing developments that occurred during the sixties, such as the Equal Rights Amendment and the increasing empowerment of women, act as a testament to Dylan’s prophetic lyrics.

Defying all racial and gender boundaries, Tracey Chapman emerged as a power and sensitive protest singer in 1980s folk music with her fantastic album ‘Fast Car’. Her beautiful, soulful voice paired hand-in-hand with softly strummed guitar strings makes for an invigorating listen.  She starkly sings of the Police’s apathy to domestic abuse in ‘Behind the Wall’ and gives the listener a glimpse into the racial divisions she has faced in ‘Across the Line.’ She channels Dylan in ‘Why?’, where she too rhetorically asks why there is so much unneeded inequality in the world. In her upbeat song ‘Talking about a Revolution’ she, you guessed it, optimistically calls for revolution and change.

I have outlined just a small section of political folk music here. Although the genre is rife with left wing ideology, I am sure it is just as easy to find centre or right-wing politics in the genre too. So, if you’re not left leaning, go and have a look for something else that fits your view point! People often say you shouldn’t mix politics with music, but I hope these five artists prove that it can lead to an interesting and thought-provoking concoction!