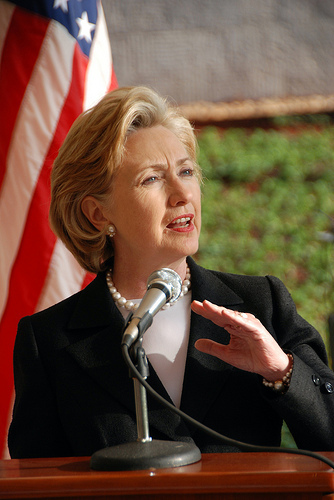 Will Hillary follow in the steps of her husband, Bill?

As Republican hopefuls gathered in Iowa on January 18 to kick-start the race to become the 45th president of the United States, mere weeks after last November’s midterms, attention turned to the possibility that, even with so many suitable and well-qualified candidates within both political parties, next November, Americans may find themselves staring at two very familiar names on their ballot paper: Bush and Clinton.

Although she has (still) yet to announce her formal candidacy, it’s a forgone conclusion that Hillary Clinton will follow in her husband’s footsteps, almost a quarter of a century later, and become the Democratic Party’s presidential nominee. Narrowly beaten by incumbent President Barack Obama in the primaries in 2008, the former First Lady of Arkansas and the United States; former Senator from New York; and former Secretary of State, now boasts an impressive amount of experience on which to run. Since stepping down as the latter in early 2013, she has kept a relatively low profile – releasing a book, making speeches, and occasionally campaigning for vulnerable Democrats – but all the time quietly fundraising behind the scene with help from her super PAC, ‘Ready for Hillary’, which has gained the support of over two million people on Facebook since it was created two years ago. It’s hard to imagine a scenario where either she doesn’t run, or she does run and is beaten in the primaries again; despite recent rumours suggesting that former Virginia Senator Jim Webb, incumbent Massachusetts Senator Elizabeth Warren, and Vice President Joe Biden of Delaware are all likely to provide a challenge.

With the Democratic primaries unlikely to be anywhere near as close as they were in 2008, and Clinton almost certain to be victorious both in the primary and arguably the general election, it’s the Republicans who find themselves searching for a suitable candidate to win their first national election in twelve years. Opting for ‘moderates’ in 2008 and 2012, many Republicans are keen to nominate a more ‘conservative’ politician in 2016, with some already signalling their intentions almost two years before Election Day.

Some of the most likely Republicans to run – like Barack Obama and Hillary Clinton – come from the U.S. Senate. Ted Cruz (R-Texas) and Rand Paul (R-Kentucky) are touted as anti-establishment, pure conservatives, keen to stress their right-wing roots and their willingness to confront party leadership. Although Cruz and Paul have support from die-hard Tea Party activists, they are often regarded as too extreme to win a national election – especially against a more moderate Democrat candidate – and questions have been raised about Paul’s experience and Cruz’s Canadian roots which would automatically disqualify him as a candidate for president, all of whom must be ‘natural-born citizens’. Expect both to make an impact on the race and hold sway over voters, but neither to gain the nomination.

Other Republicans are keen to stress the need for a social conservative as their nominee, with former Pennsylvania Senator Rick Santorum, former Arkansas Governor Mike Huckabee, and former Texas Governor Rick Perry most often mentioned as fulfilling this role. Evangelicals make up a large base of the Republican vote, and maximizing the turnout of these very conservative voters could be paramount in achieving victory in key swing states; something seen as likely to happen in light of recent controversial legalizations of same-sex marriage and cannabis in dozens of states since the last election. However, more moderate factions of the party point to the polarizing nature such a candidate could bring in a national election to independents – crucial to any presidential win – and it’s worth noting that all three have run in the past and have never come close to winning the Republican Party’s nomination.

Party loyalists insist their best chance of success comes from the establishment, with figures such as New Jersey Governor Chris Christie, Wisconsin Governor Scott Walker, and 2012 Republican Party nominee and former Massachusetts Governor Mitt Romney. These candidates boast their economic credentials whilst in charge of their respective states, and it’s interesting to note that all three come from reliably Democratic states; touted as evidence of their appeal beyond the typical Republican base. They could prove to be the perfect candidates for securing votes in crucial swing state battlegrounds, and are already heavily favoured by many of the Party’s most famous politicians.

So far, the only potential candidate to satisfy all Republican factions – the business-minded establishment, the anti-establishment Tea Party, and social conservatives and Christian evangelicals – comes in the form of a name familiar to all Republicans, as his father won the presidency in 1988, with his brother doing the same twelve years later whilst he was Governor of Florida. Jeb Bush, a reliable conservative from a swing state capable of appealing to broader demographics (especially women and Latinos) and who has a proven track record on governing the Sunshine State’s economy, finds himself well-placed going into the 2016 presidential race as one of his party’s key frontrunners.

Although the race is still young, it is increasingly likely that Americans will be faced with the same two names as they were in 1992 on Election Day 2016. Although both candidates find themselves well-qualified and highly regarded within their own parties, you have to ask the question of a country which fought to rid itself of royal dynasties: why does the United States love its political families so much?