Is it time to ditch (faux) fur?

Phoebe Bracken in Environment on 26 October, 2019. 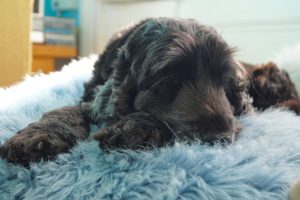 Since events such as London Fashion Week and huge brands like Prada, Versace and Burberry have vowed to stop using fur, perhaps it’s time that we look at the state of the fur industry as it continues to grow alongside increasing demand for faux fur, recognising the relationship between the two.

Real fur historically has been a fashion status symbol, adorning items such as winter coats, handbags and shoes and originating from a range of animals such as mink, fox and rabbit (angora). The controversies around fur began to materialise in the 1960s as conservationists became concerned with the killing of endangered species, especially big cats, for the fur industry. This contestation later developed into a more generalised opposition to the fur trade, on the basis of animal rights and welfare standards. Indeed, it was this opposition to real fur that provided an opportunity for the fake fur market to develop and thrive, turning the material into less of a status symbol than it had been previously.

The 1994 PETA campaign brought this issue into mainstream popular culture as Naomi Campbell and Cindy Crawford featured nude, alongside the slogan “I’d rather be naked than wear fur.”. Four years later, fur farming was outlawed in England & Wales, with all farms removed by 2003. According to a 2014 survey, 74% of people in the UK believe that using animals for fur production in fashion is wrong. Perhaps it is therefore surprising then that the import and sale of fur skins, with the exception of cats, dogs and seals, remain legal. Elsewhere, such as in San Francisco in March 2018, fur sales have been banned altogether.

In 2017, a Sky News investigation revealed that a number of products sold as ‘faux fur’ in the UK 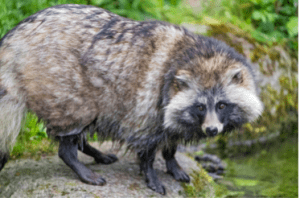 Racoon dogs are highly desirable for the fur industry due to their soft, dense fur and large litters. Source: Flickr

were actually real, originating from animals such as rabbit, cat and mink. This and other investigations highlighted highstreet brands such as House of Fraser, Debenhams, Boohoo, Forever 21 and Missguided amongst those selling real fur as fake.

Understandably this mislabelling raised a number of issues for the regulation and accountability of the retail industry. At the same time, it also seemed contradictory for supply chains to be using real fur instead of fake fur, as surely it is more expensive? However, as a consequence of the horrific farming conditions, such as in China where many of these products are made, real fur remains inexpensive.

A simple search on the wholesale site Alibaba.com for ‘animal fur’ or ‘pelt’ reveals the low cost of fur, for example, a bulk purchase of 70cm racoon dog pelt for a coat trim can cost just £3 each. This is further complicated by EU regulations which require labelling of animal parts on textile items, but not however on non-textile items. Hence, on a coat made out primarily of leather or fur, i.e. non-textile materials, no labelling is required. This applies similarly to shoes and accessories like popular pom-pom keychains (Human Society International).

The modern state of fur production

According to a report by Fur Free Britain the global fur trade is responsible for the killing of more than 100 million animals per year, such as rabbits (angora), racoon dogs, mink and fox. The industry in Europe (representing 50% of global fur production) began a voluntary scheme called WelFur in 2009 that boasts ‘science-based’ welfare programmes for fur farms.

Despite that, the majority of farmed fur animals in Europe are mink which live in a cage, often shared by two creatures, sized 90-30cm under these regulations. Ultimately, at around 6 months old the mink will be gassed and sold. Denmark remains the biggest producer of farmed mink, with 17.8 million skins in 2015 (BBC News).

Given that farmed fur animals are selectively bred for their fur quality only, they are extremely uncomfortable with living in such confined spaces. Mink, for example, are naturally semi-aquatic and roam great distances and therefore exhibit self-mutilation and stereotypic behaviour in caged environments.

Beyond the cages, trapping is a common technique in North America and Russia where animals (both the intended and unintended, such as pets) are caught and collected, often days later. In this period, the caught animal often starves or causes further injury trying to escape, such as by attempting to bite the caught limb off (Humane Society International).

Is fake fur any better than real fur?

Given that fake fur is made through energy-intensive processing of petroleum products and, like other synthetic materials, can pollute the water systems and take decades to decompose, it is not an objectively sustainable material. Indeed, the International Fur Federation cites real fur, under their regulations, as a more environmentally sustainable choice than the fake alternatives. In light of the continued use of wild fur which represents 15-20% of the world trade, caught through trapping and founded on extracting animals from the wild, such a statement is undoubtedly controversial.

There is also the question of the extent to which the consumption of fake fur legitimates the presence of real fur in fashion, particularly considering that some fake products are real fur. Nonetheless, there remain inherent problems ethically and environmentally with both (supposedly) fake and real fur. So perhaps it might be best for fashion and consumers to reconsider their use of fur, real or fake, at all.

How to tell whether or not something is fake or real fur:

If you’re in doubt, consider leaving it on the shelf.

Petition to support the ban of fur imports into the UK