Yukio Mishima is often considered one of Japan’s most important writers. He was, in fact, nominated for a Nobel Prize in Literature 3 times for his taboo breaking books. He explored traditional Japanese aesthetics and values, and more modern themes of homosexuality and the relationship between sex and brutality. But the strange story of the man behind the books is perhaps just as fascinating the ground-breaking literature itself.

Yukio Mishima was born in Tokyo in 1925. He grew up during the Pacific war but was unable to fight due to being declared unfit for service. In his autobiography, he confessed to purposely failing the test, despite having a deep desire to “die among strangers, untroubled, beneath a cloudless sky”. This would be a regret that would hang over his short and tragic life. Mishima was a star student and a vigorous writer in his youth.  His first novel, ‘Confessions of a Mask’, was published when he was in his early 20s.  It describes the story of a homosexual man who must mask his sexuality from those around him. The novel was highly praised. Mishima’s own sexuality has been widely debated; the man keenly visited homosexual bars despite having a wife and children. Regardless, it is clear that Mishima was a deeply conflicted man who had a tormented psyche.  This is shown through his tragic stories, populated by self-destructive characters and reoccurring themes of suicide and death.

The Nobel Prize nominated writer, however, was not solely content with the literary life. Mishima engaged in an eclectic career of acting, directing, practising as a samurai and even body-building. When he was 30, he took up this body-building hobby. He became fascinated with physical beauty and the male physique, lamenting his old puny, shell. Photographers took many masochistic photographs of Mishima’s newly sculpted body. Some critics have viewed this as the onset of some narcissistic psychotic disorder.  People also see his body-building as a manifestation of his obsession with beauty and the youthful body, a recurrent theme seen in his books.

Mishima became increasingly politicised throughout his career.  Despite living a westernised life, himself, Mishima was ashamed of post-war Japan for succumbing to the USA and losing its traditional values and national spirit. In 1968, he established a right-wing army called the Tatenokai (Shield society). It was set up to: defend Japan from communism, maintain the national spirit and to champion the Emperor (who had been forced to denounce his divinity by the Americans). The militia followed the samurai code of bushido. Due to Mishima’s political connections, the Tatenokai received training alongside the Japanese Defence Force (Japan’s Army).   In 1970, Mishima, and some students from the Tatenokai, staged a coup d’état in an event later known as ‘the Mishima incident’. The group infiltrated a military base in Tokyo and took a general hostage. Mishima emerged from a balcony and rallied off a speech about how Japan had been emasculated by the USA and the Emperor humiliated. Then, the enigmatic character went inside and committed seppuku (a traditional and honourable way for samurai to commit suicide): he could, supposedly, not face living in a Japan compromised by Western materialistic values. 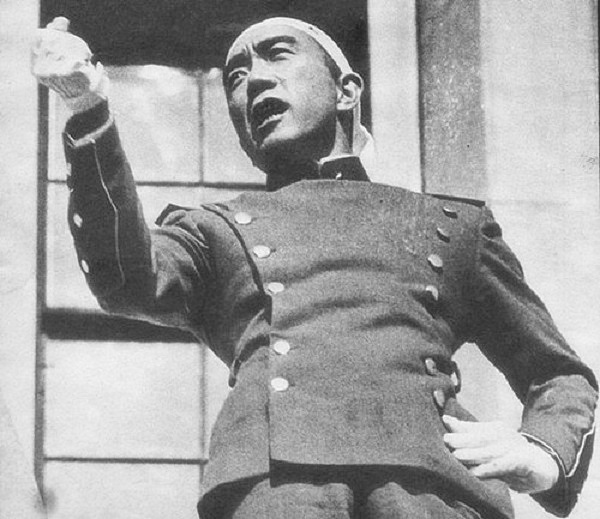 Some view the ritual suicide as a futile political gesture coming from an out-of-touch hardcore Japanese nationalist. Others see it as a final artistic act of a talented showman. Or perhaps it was Mishima’s way to make up for failing to die as an ‘epic’ warrior in the Pacific war? The dichotomous and mysterious writer’s death was mourned by the Japanese; not because of his extreme political stance, but because of his talented and captivating writing ability. Nevertheless, Mishima’s story is an interesting tale of a politicised and tormented man; It seems to reflect the identity crisis that the Japanese faced in the aftermath of the war, with their attempts to come to terms with the US occupation and face up to the imperialist atrocities committed in the name of the Emperor.

If you want to learn more about Yukio Mishima, I recommend watching this documentary