Secularism is enshrined as a fundamental principle in Article 8 of the Constitution of Bangladesh. Since its inception, Bangladesh has been largely committed to secularism, as a means of uniting its people in its struggle for independence from Pakistan. At the time, much of the suffering inflicted on the Bangladeshi people was justified through the Pakistani government’s commitment to Islam as their guiding principle, marking Bangladeshis as “infidels”. However, following its independence in 1971 and the enactment of the constitution, Bangladesh’s constitution has gone through a series of changes, including changes concerning Bangladesh’s religious identity. 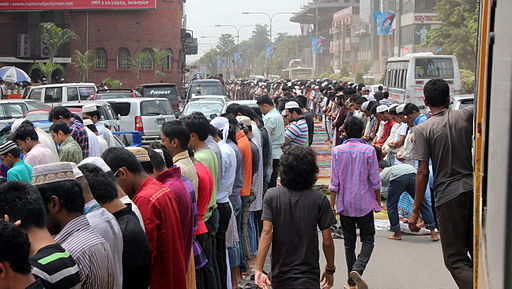 Worshipers praying in the streets of Dhaka.
Image by Nasir Khan Saikat via Wikimedia.

The Fifth Amendment to the Constitution enforced by former President Zia-ur-Rahman replaced Article 8 with Article 25A which prescribed that “Absolute trust and faith in the Almighty Allah shall be the basis of all actions”. Subsequently, President, H.M. Ershad prescribed Islam as Bangladesh’s state religion, in Article 2A of the Constitution of Bangladesh. This came along with the addition of the phrase “Bismillah-ar-Rahman-ar-Rahim” (In the name of Allah, the most Beneficent, the most Merciful) at the very beginning of the preamble of the Constitution. The removal of Article 8 of the Constitution was reversed by the Supreme Court in 2011, and it was restored. However, Islam retained its designation as the state religion. While the eighth amendment also met with legal challenges, the courts have decided to uphold the provision as maintained in the Constitution. Both these amendments were made by military rulers who ascended to power without a democratic mandate. To consolidate that mandate, they adapted Constitutional framing that was pro-Islamic which made them popular to the larger Muslim community in Bangladesh.

In post-independence Bangladesh, religion has been a central factor in entrenched political divisions between two competing national visions. One perspective is ardently secular, advancing Bengali language and culture as the primary basis for statehood, while the other emphasizes Bangladesh’s Muslim heritage and presses for an expanded role for Islam in public affairs, legal codes, and education. From being taught religion as a subject in school to using Parliamentary Acts to clamp down on those who critique religion, Bangladeshi social and legal systems have historically ensured a prevalent disenfranchisement of its minorities or anyone who stray from religious principles.

The result of this has led to Islam playing a central role in many facets of Bangladesh’s operation. A large majority of socio-legal structures and values revolve around religious Islamic principles. For example, an atheist individual within the Muslim community would have his social existence largely dictated by social institutions, personal laws and traditions that are derived from Islamic tenants. Although the same can be said about members of all communities, it is important to note that atheism is undermined in such socio-legal structures. This is largely owing to the central authority that religion plays in Bangladeshi society. However, the predominance of Islam in Bangladesh is disproportionately perpetuated through education in schools, communications through mass media and even at political fora. However, the same privileges do not extend to individuals who subscribe to a different faith structure, even though the limitations do.

A consequence of this is the systematic disenfranchisement of minority communities, particularly Hindus. Bangladesh’s demography places non-Muslims at a large democratic disadvantage with the ratio of Muslims to non-Muslims being 90:10. Such a small minority is seldom able to incentivise governments to work in their favour. Their voting bloc is often deemed as being too small to create a meaningful difference in National elections unless one considers enclaves. Even then, it is largely limited to the constituency of that enclave.

When Islam was constitutionally enshrined as the state religion, the move was criticised by minority communities. However, the amendment was still passed and maintains its position. Since then, there have been multiple attacks on minority communities, with the Hindu community feeling the brunt of the aggression. Furthermore, Bangladesh also inherited many of the existing laws of pre-liberation Pakistan, which structured itself in a way that deprived non-Muslim of their access to their property.

An example of this is the Vested Property Act. Its origins can be traced back to the Enemy Property Act, created during a period of rising tensions between India and Pakistan soon after their liberation from colonial powers. The Act initially allowed the government of Pakistan to acquire, on a permanent or temporary basis, any property they found needful for the administration of government. Evidenced by the aftermath of the communal violence that erupted as a result of partition, the act was used as a means for the Pakistani government to unjustly seize property belonging to the non-Muslim minority in East Bengal (now Bangladesh). However, Bengali Muslims were not treated any better, unless they displayed a political commitment to Pakistan or the Islamic faith. The Vested Property Act has been one of the greatest sources of marginalisation of the minority community, rendering them almost second-class citizens. Despite the efforts of the Supreme Court, little has been achieved in terms of the restitution of minority communities.

The problems of having an identified state religion are numerous and Bangladesh’s demography only makes the challenge bigger. The provision in the constitution has alienated non-Muslim Bangladeshis, and many consider it to be a black mark on the nation’s political history. Continued disenfranchisement has resulted in the migration of many religious minorities into other nations, although thankfully this tendency has declined in recent years.

The call for a meaningful return to secular principles is now more necessary than ever. With religious and other minority communities being persecuted by states on a global scale, Bangladesh has the opportunity to lead the way in exemplifying what it means to be truly secular and unite as a nation, and not divide based on religion or other personal identifiers. At the bare minimum, Article 2A needs to be removed from the constitution to start retracing the damage done by the slow and systematic Islamisation of an otherwise secular and liberal nation.