A glimpse into the Japanese music industry

If you’re anything like me, you probably haven’t been exposed to much Japanese music in your life. Despite it being one of the largest music industries in the world, the Japanese music scene hasn’t really made it over to the UK. However, this certainly isn’t any indication of the quality of its musicians. Procrastinating from revision has meant I’ve had the time to listen to a small number of Japanese albums on You Tube. Here are a few that I’d recommend to anyone, like me, looking for a starting point into the vast and eclectic Japanese music industry:

Probably one of my favourite albums I’ve listened to in recent years. The famous Haruomi Hosono managed to create a wonderful album that perfectly encapsulates those chilled-out vibes of a warm summers day. The trio of musicians transport the audience to a sandy, shady beach with their twinkling synthesises and Hawaiian sounding guitars; wave sound effects and bright carefree chords assist in that too. The effortlessly cool guitar riffs will have you bopping along to this fantastic summer album all day long. I can’t praise this album enough: it’s an essential post-exam listen! Pacific (1977) album cover. Even the island in the photo looks summery and idyllic!

The style of music played on this album is known as ‘city rock’. It mixes smooth jazz, doo-wop, rock and funk into a stylish and slick package. There are many pleasant saxophone solos that crop up in the  songs and the vocal harmonies could be straight from a Beach Boys LP.  Although I can’t understand any of the lyrics, the optimism of the album is striking. An impressive album that showcases the skilfulness of pianist Fukui, while harking back to American Jazz of the 1950s. It’s shocking to think that Fukui taught himself to play piano at the age of 22, just 6 short years before he dazzled audiences with his pacey and energic playing. This album has been referred to as a ‘masterpiece’ by some; it’s certainly true that Fukui’s playing is captivating and hooking. 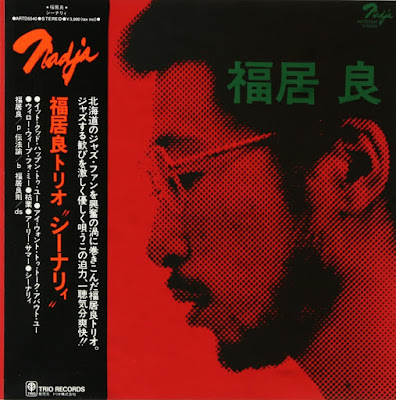 Harumoi Hosono’s highly influential band ‘Happy End’ pioneered the J-Rock genre. This is their second album, but their first album is certainly worth a listen to also. The album is essentially a folk-rock album with psychedelic undertones. It combined traditional Japanese sounds with a westernised style of music. Happy End were the first band to release Japanese rock solely sung in Japanese. The album includes folk instrumentation, such as harmonicas, acoustic guitars and even a Hawaiian guitar in one song, giving it a noticeable ‘country and western’ sound.  Despite the language barrier, the sentimentalism in their love songs reaches out. Great band with a great sound: any folk fan should certainly give them some time. Ohnuki blasts out beautiful melodies with her powerful and ranging voice on this soulful record.  The second track on the album is interesting: it pairs a traditional Japanese wood instrument and vocal melody with modern synthesises and a funky beat. An interesting, but extremely listenable album to say the least. Think I missed out any essential albums? Email music@thebubble.org.uk with any album suggestions and I’ll be sure to check them out!