The postcolonial novel deals implicitly and explicitly with ‘the ideas of nation and nationhood’, regarding the struggle of nations after colonial control is relinquished to regain a sense of their own nation and for the population a sense of nationhood. However, Wide Sargasso Sea, though a postcolonial novel, is much more complex in terms of the identity of a nation and nationhood as the main character of the novel, Antoinette, is a white Creole inhabitant of Jamaica just after the emancipation act is passed; she is at once neither English nor Jamaican, and is home in a nation that is not her original ‘homeland’ of England. This search for identity within a nation itself however is not unusual within postcolonial novels: ‘a major feature of postcolonial literatures is concern with place and displacement. It is here that the special post-colonial crisis of identity comes into being; the concern with the development or recovery of an effective identifying relationship between self and place’[1]. The narrative of the novel itself and the language used is key to revealing and understanding Antoinette’s sense of self and the struggle that arises in this attempt, and this arises as a direct result of postcolonialism ‘one of the main features of imperial oppression is control over language’[2]. 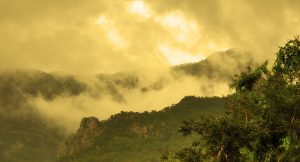 The first section of the novel is narrated retrospectively from Antoinette and recounts her childhood and adolescence until she is married to an unnamed husband (implied to be Mr Rochester from Jane Eyre). During the passage concerning the burning of Coulibri, her childhood home, we see Antoinette’s interaction with her childhood friend and native of the island, Tia. Antoinette runs to Tia and states ‘As I ran, I thought, I will live with Tia and I will be like her. Not to leave Coulibri. Not to go. Not.’[3]. However, Tia rejects Antoinette, throwing a stone in her face: ‘we stared at each other, blood on my face, tears on hers. It was as if I saw myself. Like in a looking glass’ (WSS, p. 38). Tiffin claims that the imagery of the looking glass used here shows ‘similarities between Antoinette’s fate and that of black slaves in European hands’[4]; her argument for this analyses being that Antoinette is regarded in terms of monetary value, has her name changed by her ‘possessor’, and is confined in a prison like an animal – she concludes that: ‘victims of history, one is the true sacrificial mirror image of the other’[5]. However, Tiffin’s view is arguably inappropriate; clearly, the position of white women and slaves in the 1800s are incomparable, perhaps best summarised by black feminist Bell Hooks when discussing how inappropriate is that white women often use the narratives of slavery to describe their struggle: ‘there was very little, if any similarity between the day to day life experiences of white women and the black slave’[6].

By contrast, some critics see a subversion of Tiffin’s view, claiming that this incident instead ‘places Antoinette firmly within the white community’[7] and specifically ‘her white female identity’[8]. This could be supported by the way she is treated by the white community surrounding her: where at first she shown as someone ‘they’ (WSS, p. 22) can ‘laugh’ (WSS, p. 22) at whilst wearing Tia’s dress and therefore somewhat blurs the boundaries between black and white, but afterwards she is instead described as marriageable, and therefore white, by her Aunt Cora, who states the wound ‘won’t spoil you on your wedding day’ (WSS, p. 39). 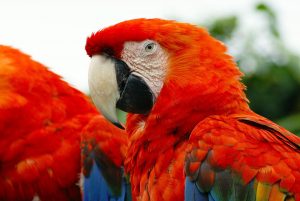 However, it instead appears from these quotations that Rhys’s narrative denies these simplified readings of race. Antoinette separates herself from the white community throughout her narrative, most noticeably in her earlier pronoun use of ‘they’, but likewise the scene where Tia rejects her friendship reveals none of Tiffin’s supposed connection to black people, although this may be more of Rhys’s narrative voice intruding than perceived by Tia herself. The qualifier ‘as if’ blocks any chance of real recognition with Tia, as does the ‘looking-glass’ image; Tia is reflected within the ‘looking-glass’ of Antoinette, simultaneously casting herself as the dominant person in the racial hierarchy whilst trying display a sense of connection. Indeed, throughout the sections that are narrated by Antoinette, the binary codes used to signify difference between the races of colonised and coloniser are disturbed: Antoinette is referred to and indeed seems to identify as neither black or white, but as the derogatory terms she is called instead – a ‘white nigger’ (WSS, p. 20) and a ‘black Englishwoman’ (WSS, p. 35). This interpretation is evidenced from the very start of her narrative which shows the first lack of identification with the white colonisers through pronoun use, with ‘the white people’ clearly separate from her own identity: ‘they say when the trouble comes close ranks, and so the white people did’ (WSS, p. 1). Rhys’s use of narrative to reveal the confluent and conflicted aspects of characters’ identities and identification with race is continued through the novel into the second half, which is narrated by Antoinette’s unnamed husband: Winterhalter summarises this in her essay by stating that ‘her control over narrative design… reveals her insight into the insufficiency of predictable cultural and gendered definitions in the identity struggles of her speakers’[9].