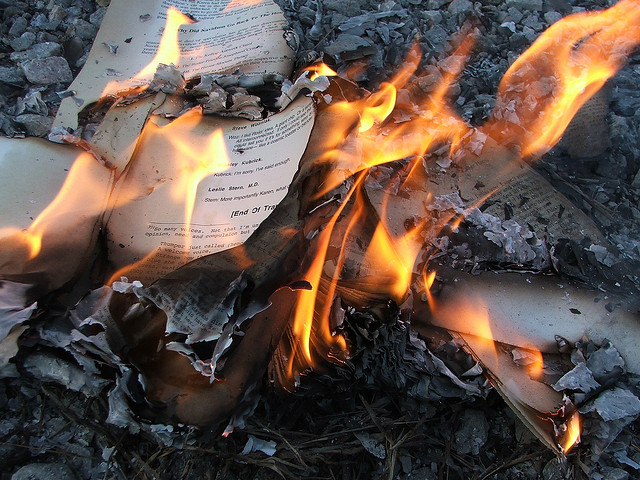 When books are burnt, we are silenced.

As both a literature student and a general enthusiast of all things literary, even just the idea of book-burning is enough to create an immediate reaction of horror and disgust. After all, for better or for worse, I have dedicated three (or more) years of my life to studying literature. The notion of destroying a book, or any work of art for that matter, is abhorrent to me.

The prevailing question here is why? Why destroy a piece of art that a person has painstakingly created and has put together? The whole procedure of publishing a book is a creative process that goes from the author penning their ideas, to the practice of editing, before it is finally printed and published. As I am sure most of you will sympathise, the process of writing alone takes monumental time and effort, whether it is a work of fiction, a political manifesto or even an essay!

The writing part of course, is only the beginning. A brief stint of work experience in the publishing industry proved to me that the multiple processes that come afterwards, from meticulously editing the manuscript, to designing the cover, to finally printing and publishing the book, is an art in itself. Although, thanks to the modern inventions of computers and printers, the physical process of publishing is a lot easier compared to the past when manuscripts were made of vellum and handwritten with ink. This however, does not detract from the fact that books are still works of artistry that take monumental time and effort to create. So why destroy art?

The answer lies in the fact that books are not merely artistic; they are inherently political.

If we turn to history, religious and secular texts were burnt as a political tactic; often as a way of protesting opposing belief systems. For instance, the very first recorded mass book-burning occurred in China, showing that book burnings can be seen not only throughout history, but also across various cultures. In 213 BC the Emperor Qin Shu Huang, a ruthless conqueror who united the various states of China under one rule, ensured his absolute power by burning the historical records of the past. Peter Bol, a professor of East Asian Languages and Civilisation at Harvard states, ‘Ideologically speaking, the Qin make the argument, “We don’t want to hear people criticise the present by referring to the past”’. In other words, the burning of books acts as a way of preventing people from getting access to the ideas and practices of the past that might oppose the current power structure.

This ideological motivation appears to be behind most of the other book burnings that have occurred throughout history, including the more recent ones, such as the Nazi book-burnings. Even more topically, the burnings of the Qur’an due to the post-9/11 paranoia led to people condemning Islam as a religion due to its association with religious terrorism. You may be familiar with the American pastor Terry Jones, who in 2011, controversially burned the Qur’an as a way of condemning Islam based on his belief that “Islam is of the Devil”. This has lead to the deaths of multiple people in the Middle East during protests in Afghanistan, showing the inherent power that books possess.

The utter outrage caused by people in reaction to the burning of the Qur’an in this incident demonstrates why books can be so dangerous; they are both a record of a culture’s history and the source of their current beliefs and lifestyle. As a whole, the Qur’an, much like any book, is a record of a cultural identity. From this perspective, it is easy to understand the reason behind the strong reactions incited by book burnings: it is a symbolic way of condemning not only a culture’s beliefs, but also their entire identity.

One of the most iconic examples of a governmental organised book burning is the Nazi burnings during World War II. During the April of 1933, the German Student Union decided to take action against any opposition that undermined the rule of the Nazi Party by organizing mass burnings of texts with ideologies that fall under this category; including but not limited to Jewish, liberal and communist texts. Over 25,000 volumes were burned in total.

The reason behind why this incident is so seared onto our cultural imagination, compared to other book-burning incidents is because this is probably the most overt symbolic eradication of ideas and cultures in recent history. The Nazis were obsessed with purification and cleansing; of creating a racially and culturally “pure” Germany. Thus, the burnings were symbolic; the fire both literally and metaphorically cleansing the nation from ideological impurities.

This is a form of oppression of thought itself, a real-life version of the Orwellian “Thought Police”, and it runs contrary to the freedom of expression and thought that we have based our contemporary society on. Books are the vehicles of ideological expression, which is the very core of the reason as to why book burnings incite such an intense feeling of horror. The destruction of books is the destruction of our right to think and express ourselves individually; it is a form of intellectual oppression.

We can see still today that as a culture, we have a perverted fascination with the Nazi book-burning. In this year alone two films have been released; ‘The Book Thief’ and the ‘The Monuments Men’ the latter of which is headed by George Clooney. Both works address the mass destruction of not just literature, but of art, that was considered to be subversive to the Nazi cause. They also emphasize how the burnings were not simply a way of protesting opposing forms of thought, but a way of physically and symbolically destroying entire cultures. As George Clooney so succinctly puts in the trailer to ‘The Monuments Men’, “If you destroy an entire generation of people’s culture, it is as if they never existed”. This brings to light the ultimate, nightmarish goal of the Nazis. By mass murdering the Jewish people and burning their art and literature, the aim was to completely eradicate any trace that the Jewish race even existed.

This is perhaps why we treasure books, and why their intentional destruction creates an instinctive feeling of disgust. We understand literature, art, and certainly any other forms of creative expression, to be the vehicles which we use to express and develop ideas about our culture, and as a result, they become a record of our history. Thus, the destruction of books is a destruction of not only our cultural identity, but also our right to think and express ourselves freely. When books are burnt, we are silenced.