What links ‘Jane Eyre’ and ‘Heart of Darkness’?: A Bakhtinian Reading (part two)

Instead, it would be better as Wollaeger does in reference to Heart of Darkness that the very separation of the audience in the nature of this conclusion is what makes these novels successful: ‘the possible success of this act of narration may lie in its own failure’[1]. Part of this is related to the fact that both novels are narrated retrospectively in the first person, which leaves them vulnerable to what Ian Watt calls the ‘radical instability of the I’[2]: a tension created by the past and present forms of self being two separate things yet seemingly indistinguishable. In Heart of Darkness it is noted widely that the language within the novel is characterised by lack of clarity in narration and through the repetition of words such as ‘inconceivable’ ‘unspeakable’ and ‘indescribable’ are repeated again and again throughout the novel. Although some have criticised this ‘willed intensity of nullity… making a virtue out of not knowing what he means’[3] as an artistic failure, I would argue that this is instead an ‘artistic method that seeks to say the inexpressible in such a way that its unsayability directs the imagination towards it while remaining beyond speech and comprehension’[4]. It is worth noting that Renfrew claims that ‘time, as opposed to language, is in fact the primary category in the chronotope in literature’[5] which means that the expression of the novel is understood by the reader by acknowledging the chronotope itself rather than the language, although this would be less effective without the language used in the novel. This is because the language of the novel allows the ‘instability’ in time between the present and the past ‘I’s’ of the novel to be explored, most notably through what Watt calls ‘delayed decoding’[6], which is a method that aims to replicate human experience, making it seem as though one is in the present even though Marlow is retrospectively narrating his tale. Here we see first cause, and then effect, perhaps most effectively in the passage where Marlow is attacked: ‘sticks, little sticks, were flying about – thick: they were whizzing before my nose, dropping below me, striking behind me against my pilot-house’[7] before stating ‘arrows, by Jove! We were being shot at!’[8]. Here, paradoxically, through breakdown in language and expected systems of retrospective Conrad is able to reveal what he wishes to express to his readers in language. It would seem that some critics take the connection between language and overall narrative chrontope to prioritise the language, with the narrative simply an extension of this: ‘what Leavis takes to be a particular failure of Conrad’s prose is actually a general failure, which Conrad is directly dramatizing in his narrative’[9]. However, as is made clear by the disrupted language that is used that, as Renfrew reminds us, the overall expression of Heart of Darkness is revealed through the chronotope – the language alone would not communicate the same sense of alienation to the audience if the chronotopes were not disturbed. 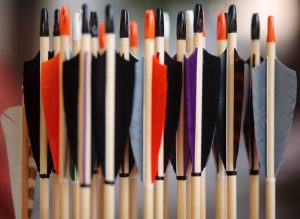 Likewise, Bronte also reveals a ‘radically unstable I’; not only in the conclusion, but like Conrad throughout the novel. On the other hand, in this scenario it is not instability in time but rather a conflict between Jane’s perception of her inner and outer selves. This is perhaps most notable in the first scene where Jane seems to become truly self-aware, in the red-room. Her description of herself in the looking class is clearly displays Bronte exploring this divide: ‘all looked colder and darker in that visionary hollow than in reality: and the strange little figure there gazing at me, with a white face and arms specking the gloom, and glittering eyes of fear moving where all else was still had the effect of a real spirit’[10]. Here Jane clearly separates the outer version of herself from her inner ‘I’, partly by referring to herself in the third person but also as she classifies it as supernatural with the words ‘strange’ ‘glittering’ ‘spirit’ and later ‘tiny phantom’. Gribble argues that this separation between the inner and outer ‘I’ reveals great narrative control even as, like delayed decoding in Heart of Darkness, the narrating-I appears to be absent and we accept the view of a child, allowing for greater impact from the reader: ‘Jane’s imagination, playing on this sharply isolate image of herself, reveals to her the essential nature … the interaction between fact and imagination, between external and internal, is such that we are compelled to accept a composite view of the child’s insignificance and her power, of her subjection to experience and her control of it’. Both Heart of Darkness and Jane Eyre utilise the instability of multiple first person narrators in order to disrupt not only the chronotope but also the language of their novels in order to support this, although Conrad does so with the portrayal of time within the novel and Bronte with the instability between the inner and outer self.

To conclude, the endings of both Jane Eyre and Heart of Darkness are significant in their conclusions because they alter the entire expected framework of the chronotopes in place, although this essay has shown a level of complexity within this, with both novels already disturbing their chronotopes somewhat by containing elements of multiple ones. Furthermore, these chrtonotopes are disturbed both by the nature of the endings of the novels but also by the narrators of both shifting to periphery characters. The resulting alienation is a theme that is carried throughout the language of both novels in the first-person narration through the ‘instability of the I’, although this turmoil is secondary in importance to that of the chronotope and the is seen to be explored in different ways: Bronte through the idea of the inner and outer self, and Conrad through the portrayal of time. This essay has shown the imporatance of a chronotope in analysing the structure of a novel and likewise its disruption, perhaps more so than language; as Renfrew states ‘chrontopes are ways of describing the narrative frame of a particular work… and hence of understanding the significance of everything that moves or is represented within that frame’[11]. 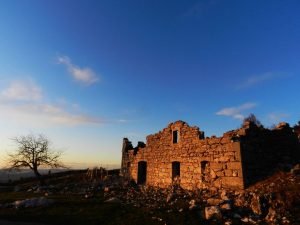 ‘Thornfield Hall is quite a ruin’ Image Source: Flickr

[2] I owe this reference to Dr Garrat