Salem’s Witch Trials: A Story of Hysteria, Execution and Obsession

Oftentimes we look on the acts of the past as if we are somehow morally superior—as if we could never be subject to the same defects. However, the incidents of Salem paint a vivid picture of, when a combination of pressures is applied, what humans may be capable of. While, following the admission of the court’s error, loved ones were later remunerated, the incidents of Salem in 1692 continue to strike contemporary audiences as demonstrative of the capacity for fear-mongering to result in the irrational persecution of others. In light of Cotton Mather’s quote, “It were better that ten suspected witches should escape than that one innocent person should be condemned”, it is possible to interpret the Salem trials as a testament to the ways in which a surge of infighting and bad feeling can result in suspicion, hostility and the unjust treatment of society’s scapegoats. 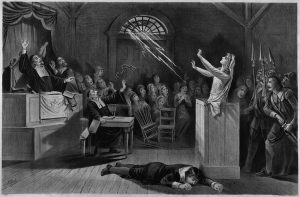 In 1692, several young girls accused other women of witchcraft. The Reverend’s niece and daughter experienced mysterious convulsions; these were attributed to the influence of evil supernatural forces. As a result, the girls implicated other women who were seen to have corrupted them, resulting in the instigation of the ‘Salem trials’. Due to their claims, a dedicated court was instituted to combat the ‘rise’ of black magic, and magistrates were presented with a list of persons who had supposedly engaged in witchcraft. The trials began in February 1692 and concluded with the freeing of the remainder of those who had been imprisoned in May 1963.

It is somewhat difficult to picture what it may have been like in Salem, 1692. Having said which, we can begin to imagine a society met with a variety of pressures while undergoing a period of rapid change. One such pressure was the conflict between the French and the British taking place in New York, instigated by King William. The war altered Salem’s demographic as people migrated to Salem following the destruction of Quebec, New York, and Nova Scotia. Salem’s unrest was compounded by the threat of conflict with Native Americans, the outbreak of small pox and the degree to which historical sources of families’ income differed, becoming a source of lasting antagonism.

In addition, Christians in the 17th century were acutely aware of their susceptibility to the Devil’s attacks, so the threat of evil was at the forefront of the minds of the pious inhabitants of the New World. Having received a charter which appeared in opposition to religious sentiment, and which downplayed the separate identity of Salem, the refusal of the Massachusetts Bay Colony’s royal charter contributed to high levels of anxiety. Salem’s unstable conditions were also worsened by the Puritan’s concern for the loss of their religious freedoms, fearing the circumstances in England, which they had fled, might replicate themselves in the New World. Furthermore, Christian feeling reflected the longstanding belief that those initiated into the Devil’s ‘circle’, as it were, would be endowed with the potential to harm others. Thus, Puritans saw the rampant evil practices allegedly occurring at the time as the cause of Salem’s strife.

As a result, while many individuals had been sentenced to death for witchcraft during the Middle Ages, the resurgence of claims, specifically against women, in Salem was heavily influenced by historical factors. While there is no clear consensus as to what may have contributed to the witchcraft scare, Lyme disease, Encephalitis, hostility and competitions between families are amongst the factors cited.

One of the accused women, named by the young girls, admitted to relations with the Devil after being questioned for an extended period. Following her confession, all the women listed were imprisoned. The first execution, was that of Bishop, followed by the questioning of over a hundred persons and a further eighteen executions. Many women were hanged even despite attempting to defend their innocence, and several were accused on the grounds of supernatural premonitions: even while Cotton Mather campaigned against the use of dreams as evidence. Though attempts were made, in September, to remedy some of the damage done and to make financial amends (as enforced by the Massachusetts General Court), the brokenness the trials left behind continued.

The Salem trials occurred at the height of bad feeling, and the efficiency with which the social unease was deflected onto defenceless people points to a troubling period in American history. The effect of these trials has been far-reaching with productions, such as the famed 1953 play, The Crucible, having taken the harrowing events of 1692 as inspiration. However, the question, what can be learnt from these trials, remains. The incidences of Salem speak to this dangerous human capacity to alienate, to ostracise and to oppress innocent people.  In Britain, a society experiencing rapid changes: the effects of immigration and emigration and perhaps, now, the potential economic upheaval expected to be brought about by Brexit, it is paramount that we do not resort to an over-reliance on the mere ‘superstitions’ that can result in the irrational hatred and blame of others.