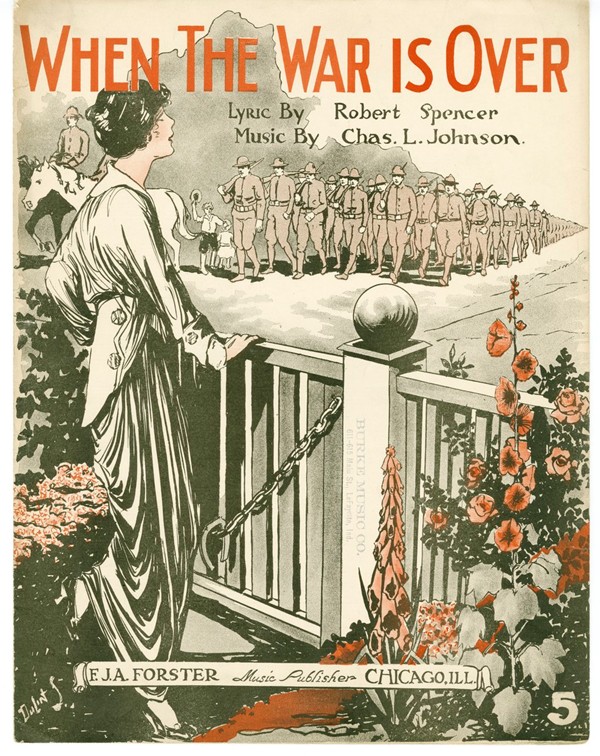 Wars have influenced all types of music, reflecting the mood of the population.

In artistic terms, the First World War is known for the large volumes of poetry that poured out of the trenches, documenting first hand, the experiences of life for the frontline soldier. And consequently the work of soldier poets like Wilfred Owen and Siegfried Sassoon are perhaps our first thoughts when we think about the influence the war had on the English arts. However, we don’t so often think of the composers who fought in the war, and the lasting effect conflict throughout the twentieth century, not just the Great War, had on English music.

The First World War lasted a lot longer than had be originally envisaged, and the huge numbers of casualties meant that any man who was fit to serve was required to join up by choice, or be forced to by conscription. Consequently men from all backgrounds and occupations were brought together to fight under one flag, and music students and composers were of no exception. Hubert Parry realised that the war affected everyone who was drawn into it and worried deeply for the loss to the arts. In a letter to Herbert Howells he wrote “This is what horrible senseless war means – and we can do nothing. To put our views, that such beings are capable of doing the world unique services, before military authorities would surely appear absurd. I suppose there are thousands of others in other walks of life in the same case with us.”

Ivor Gurney, although known for the poetry he produced while serving as a private, was by training, a composer, prolific in the genre of art song. His talent was spotted from an early age and he eventually received a scholarship to study composition at the Royal College of Music. Although his talent for music was obvious, Gurney was a troubled man, suffering his first mental breakdown in 1913 while still a student. He joined the 2nd/5th Gloucesters in 1915, hoping that the rigor of army life would help mental his situation. At the same time, war also brought him into contact with the soldier poets eventually setting over a dozen of Edward Thomas’ poems to music. During his time at the front, despite his lack of a piano, Gurney was still composing, and his song setting of words by John Masefield ‘By a Bierside’ was written whilst he was at the front line, and along with the other songs he wrote at this time, reflect the feeling longing for the security of home, conjured up being surrounded by the carnage of war.

After the war Gurney’s mental health deteriorated further (although the cause of this is still speculated, it can’t be denied that the war played its part) and he attempted to commit suicide but failed. He was admitted to an asylum in 1922, where he continued to write music and poetry, although its quality and quantity diminished with very little being written in the last decade of his life, during this time, he wrote to his closest friend, Marion Scott, despairing at his situation, proclaiming of the wonders he could achieve if only he was well. After his death in 1937, his manuscripts were collected by Scott and the composer Gerald Finzi, who edited some of his songs for publishing. The majority of Gurney’s surviving output, including many string quartets and nearly three quarters of his songs, remains in manuscript, dismissed by publishers as the confused product of mental decline, and is only now beginning to find an audience and the recognition it deserves.

Although he ended his life in a sorry state of mental decline, Gurney was at least to survive the war, and with time more of his work will come to light. George Butterworth, best known for his orchestral idyll ‘Banks of Green Willow’, was not so lucky, being killed during the battle of the Somme and his body never found. Butterworth was praised as being one of the most promising composers of his generation; he was a close friend of Ralph Vaughan-Williams (who served as a stretcher bearer) and suggested that he turned sketches into what became A London Symphony. It is interesting to think, had Butterworth survived, what else he may have written, and what influence the two composers may have had on each other, and more so to think what would have happened to future generations of composers had Vaughan-Williams been lost to the war. His emerging modal, pastoral style may not have been so influential to those whose careers began after the war.