It’s typical to think of memes as a modern phenomenon. Indeed internet memes are, but what if “meme-age” refers to something deeper, something more entrenched in the history of culture and societal practices. While the notion of the meme is complex, and critics have difficulty fixing down its meaning even now, delving into the mystery of the meme brings us a little closer to understanding the mystery of human behaviour. To set the scene, I’ll begin by providing a brief outline of some of the contemporary definitions of a meme.

The lesser known fact is that the concept of the meme, or rather the concept of the spread of cultural ideas, is most famously presented in Richards Dawkin’s The Selfish Gene (1976). Defined as a “a unit of cultural transmission or imitation”, the meme evolves much like a living being, with the more efficient ideas out-competing others. Building on the principle of imitation, Dawkins developed the word “mimene” to describe a phenomenon occurring in a similar way to genes which are replicated and passed on. This word was later shortened to “meme”. 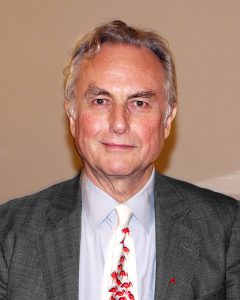 Spreading from one individual to another, the internet meme usually involves some form of imitation or representation of a saying or an idea online. Taking the form of videos, GIFs and images with captions, these internet memes facilitate the sharing of ideas. Over time, users have steadily contributed their creativity to the meme ‘sphere’, resulting in memes that are considered funny. The mechanism behind the creation of memes, linguistically speaking, is quite complex as internet users work to transmit thoughts and ideas through a “multimodal grammar”. At this point, we should note that the general category of meme contains the subcategory of the internet meme, referring to ideas share via the internet.

While some of these memes will most likely be before your time (or perhaps, before your memory), some of the earliest to take the internet by storm included the “Hamster Dance”—a meme which involved sets of dancing hamsters in a GIF. This meme, developed in the same year as websites “Mr T Ate My Balls” and “Bert is Evil” (1997), spread through social-networking platforms. Based on a poor translation of “Zero Wing”, a Japanese game, “All Your Base Are Belong to Us” (2000), another popular meme was created around this time, and it in many ways prefigured the way memes look today, using a signature format and text type; it was largely seen as the earliest “image macro” meme.

In 2003, yet a different trend was emerging (one which might be more familiar to you). Many internet users began sharing images of their cats following the creation of 4chan.org, and a user posted a caption over a stress-free picture of a cat in 2005. By coupling charming images with jumbled language meant to supposedly mimic fictional ‘cat-speak’, these gained momentum, and in 2006, the use of the term ‘LOLcat’ increased due to its success. 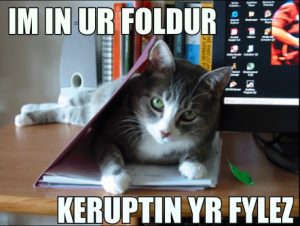 An Example of a “LOLcat” Meme.

In a bid to demonstrate what could be achieved using the software Kinetix Character Studio, Michael Girard created an animation which would be turned into a GIF, later becoming “The Dancing Baby” (1996) meme. The first meme to become viral, in part due to television appearances, the “Dancing Baby” GIF was frequently circulated on online platforms. Despite this, the jury is still out as to whether the humble smiley is itself the first internet meme [:-)]. While some consider Scott Fahlman’s “smileys” (1983) the earliest Internet memes, others have argued the smiley cannot be considered a true meme.

Furthermore, it is worth noting the countless number of memes spread by imitation before internet memes. For example, over the course of WWII, graffiti containing the imagined “Kilroy” increased in popularity. Characterised by his distinctive nose, he was depicted looking over a wall with the caption, “Kilroy Was Here” to accompany it. Indeed, Fulton lists several pre-internet memes historically written on buildings, in schoolbooks and walls—from the Church of the SubGenius (circa 1959) to the Frodo Lives (circa 1970). 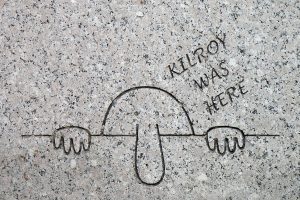 Engraving of “Kilroy” on the WWII Memorial in Washington D. C.

As a result of this line of thinking, the question of whether a comic from 1921 could be considered earliest meme was posed by a BBC article in 2018. Printed in The Judge from the University of Iowa, the 1921 comic resonates with the modern “Expectation vs Reality” meme. The Wisconsin Octopus has been originally credited for the comic. A second comic, now strikingly old-fashioned, appeared in circa 1919, and both comics contrast reality with hopes and employ a set of panes. In addition, they have a similar design, making them thematically and visually similar, much like types of meme. It has been argued, therefore, that the contemporary meme is anticipated by The Wisconsin Octopus.

Going even further back in time, however, the “momento mori” trend, the “reminder of death”, might also be categorised as the earliest meme. Often including emblems of death and portrayals of skulls, this cultural element, popular in the seventeenth-century, stretches beyond the ancient Romans. Adopted by many counties worldwide, the concept of “momento mori”, reflected in buildings and artwork, emphasised the transience of life. Hourglasses were also used as representations of mortality. 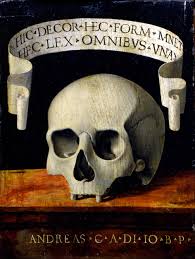 Still, perhaps it is worth looking to the presence of phallic symbols in prehistory for the origin of the meme. Penises made a regular appearance in cavemen sketches for example. Later, penises were drawn on Roman jewellery, floors, sculptures and establishments. And, while sexuality had a very different significance to the Romans, in the Medieval period, penises continued to be depicted (see the “Phallus Tree”).

Attempts to understand the meme force us to question whether the meme is anymore a case of a millennial behind a computer than it is of a caveman with a sharpened spear. As Dictionary.com points out, the meme can even be related to folklore—to the intercultural sharing of ditties, jokes and stories etc. Both the propagation the internet meme and of nursery rhymes, for example, are reliant on people’s participation in the transmission of culture. That’s what makes them difficult to define, but it’s also what makes the meme so alive, so enduring and yet so, dynamic. A product of collaboration, the meme is a glimpse into our desire to imitate, create and share.