Last Thursday was Valentine’s Day, and while many will have been engaged in a day of celebrating love, I wonder just how many will have questioned how being in love changes the individual: physically and psychologically? Equally, one might ask, what about the absence of love, unrequited love, and the pang, perhaps, of a love from the remembered past? How do these experiences affect us? Hence, in this article, I will explore the idea of lovesickness: a concept many of us will be acquainted with, be that through literature, experience or the common use of phrases such as “dying of a broken heart”.

In literature, the notion of lovesickness is pervasive. Shakespeare’s Romeo and Juliet (1595) is one notable example, particularly as the deaths of Romeo and Juliet are the direct result of the intensity of their love for each other [1]. Yet another example of literature’s exploration of the idea of lovesickness can be found in the Heptaméron (1492-1549, published 1558): a text written in the sixteenth century. With regards to this novella, Judy Kem argues that an understanding of the condition of lovesickness and the process of remembering that readers of the time would have been acquainted with is crucial to an understanding of the text, even though ideas of lovesickness might, today, seem outdated and the ethical standpoint of the novella, unclear [2]. The idea of lovesickness is also engaged with centuries later in Goethe’s The Sorrows of Young Werther (1774). 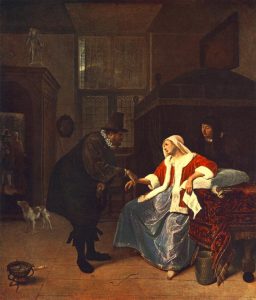 In terms of phrases that have made their way into public discourse, along with “dying of a broken heart”, the phrase, “burning with passion” reflects historical beliefs. In fact, the phrase, “burning with passion”, relates to the impressions, arrived at through early modern investigation, that increased pressure on the heart and an increase in body temperature could be related to the symptoms of love. Indeed, during this period, those examining the bodies of individuals in love who had died reported witnessing hearts that had been physically worn, scorched by the strain of love. However, these were not the only symptoms of lovesickness that were emphasised. Those who were lovesick were also thought to have a reduced capacity for functioning cognition and judgement [3]. Hence, while the ‘language’ of lovesickness has become so ingrained that we don’t often take time to think deeply on it, our modern ideas of lovesickness have been informed by a long history of medical interpretation.

So, where do these ideas of lovesickness originate? Since Ancient times, the idea of lovesickness has been explored: as with the account of Araetaus. Nonetheless, to begin our investigation, it is worth picturing eleventh-century Persia where, legend has it, the well-known story of a king’s nephew unfolds. After it appeared that the king’s nephew was plagued by some form of sickness, Avicenna was called to help treat the young man. In an attempt to diagnose the king’s nephew, Avicenna required the man to recall parts of the city, imagining that ishk (Arabic for lovesickness) may have been the cause of the young man’s suffering. Avicenna noted how the rate of the man’s heart beat quickened as he referred to one district in particular. Next, Avicenna encouraged the man to recall streets, places and individuals. Once Avicenna had enough evidence to deduce that the man was experiencing the effects of love, the cause of the king’s nephew’s illness was relayed to the king. Consequently, the man’s illness abated when he married the woman he loved [4].

Avicenna’s Cannone medicinae hugely affected concepts of lovesickness. Similarly, the Viaticum played a significant role in lovesickness’ definition during the Middle Ages. Both texts represented a real attempt to understand the psychological and physical changes accompanying lovesickness [5]. Indeed, the all-consuming condition of melancholia was perceived as the result of having unbalanced humours, caused a preoccupation with a desirable ‘object’ of an individual’s affection. This notion was included in Garard Berry’s response to the Viaticum at the close of the twelfth-century.

And all this took place against the backdrop of a Middle Age society supposedly plagued by a series of humoral imbalances. An understanding the theory of humours helps us to begin to make sense of medical practice in the Middle Ages, so I will expand on this briefly here. Sickness, it was believed, was the result of the imbalance of one of four bodily fluids, which, when the individual was in ordinary health, were present in the right proportions. The link between personality and the leading presence of one of the fluids, resulting in a distinct sensibility had already been emphasised by Galen, a medic’s, research, and the it was thought that the distinct behaviours of a melancholic, for example, might be attributed to the excess of black bile [6].

Moving on to the early modern period, it is possible to see how the tradition of individuals seeking medical attention for lovesickness continued, and there are numerous recorded cases of this, particularly in the sixteenth and seventeenth-century. As Dr. Lesel Dawson notes, the perceived problem of a surfeit of “erotic desire” is well-preserved in journals, medical records and personal exchanges of the period. With the potential to cause physical degeneration, to interfere with the blood and even the liver, the rapid bodily response brought about by the sight of the beloved ‘object’ was described in the same other sickness were described: in terms of infection [7].

“Bloodletting, enemas, emetics, change of diet and an examination of the individual’s astrological chart could be combined with psychological advice when treating a patient.” Dawson

Several approaches were taken to attempt to treat this mysterious ‘disease’. Through foods, operations and an array of drugs, medics worked to treat lovesickness. In addition, a range of other techniques were employed: “Bloodletting, enemas, emetics, change of diet and an examination of the individual’s astrological chart could be combined with psychological advice when treating a patient.” In addition, sufferers of love sickness were encouraged to speak to others about the ‘object’ of their affects, in order to remain active and, in order to divert the individual’s attention and to dispel toxic vapours, to engage in music. Nonetheless, sex was still seen as the most efficient way to rid the individual of lovesickness as a means or combatting deadly melancholy-inducing vapours as it helped to address an “excess [in] blood and seed” [8].

As we can see, the history of lovesickness is a complex one, founded on a mixture of interpretations, observations and cultural ideas that are, in a manner of speaking, very different from the ones we hold now. Nonetheless, it is no less interesting to see how concepts of love-induced melancholy, ill-judgement and ill-health and their relation to lovesickness persist, continuing to inform the cultural artefacts and practices of today.