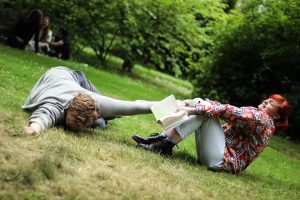 HBT’s road to Twelfth Night has not been an easy one; battling three cast changes and a thunder storm within two days of opening night, the odds seemed stacked against them. Yet, Director, Jenny Baker, and her team overcame all adversity and managed to produce a pleasantly silly evening of theatre, despite being, understandably, rough around the edges.

Baker tackled one of Shakespeare’s greatest known comedies competently, however I feel much of the direction missed the mark somewhat. There was evidence of a lack of understanding of the script at times from both a directorial and performance level, and sadly the sword/penis jokes were missed, as was the comical subversion of the fool’s intelligence and the master’s naivety. I feel the stock comedic characters of Sir Toby Belch (Charlie Keable), Sir Andrew Aguecheek (Emily McLean) and Mary (Florence Russel) were relied upon too heavily as a source of comedy. While these were played with great energy and appropriate melodrama, their characterisation was all far too similar and one dimensional.

This fun toilet-humoured comedy could be justified by in the presentation of a contrastingly serious main plot, whereby this silly subplot mocks the melodrama of the lovers’ triangle. However, I felt the love triangle between Olivia, Viola and Orsino lacked conviction and sincerity. I must commend Rosie Dart (Olivia) and Rosie Minnitt (Viola) for their excellent performances, it was a pleasure to watch such strong female actors, however I felt the pair had been largely miscast. Minnitt’s performance and delivery of verse was extremely impressive and conveyed with ease and confidence, however, her command of the stage and her excellent comedic timing felt somewhat at disjuncture with Viola’s awkward nature. While much of the comedy of the character comes from Viola’s naivety and unawareness of Olivia’s growing love for her, Minnitt’s performance seemed far too clever and controlled to evoke the necessary comedy. I, for one, think she would have been much more suited to the role of Mary, where her intelligence and comedic timing could have shone. Dart equally suffered from this miscasting, as although she is evidently an extremely strong actress, her strength prevented her from displaying the vulnerability necessary of Olivia’s mourning.

All in all, however, the performances were generally strong and there were remarkably few slip ups considering the short rehearsal period. It was a very impressive and bold decision from Baker to continue with the production, and one that she should be proud of.