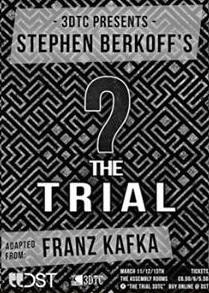 It is not very often that I leave a student production without a long list of things that were good, but could have been better had the team behind the show been just slightly more focused on the finer details (something I myself don’t do nearly as often as I would like to). I stopped taking notes for this review of Steven Berkoff’s The Trial ten bullet points in for the fear of missing something that was happening on stage. I’ve had just enough experience studying Franz Kafka’s original text so as not to be worried about falling behind in the plot. My concern, rather, was for failing to notice any of the brilliant facial expressions or movements that were on display at last night’s show.

It’s been over a year since the last time I saw a production in Durham that was so slick or cohesive in its execution. Everything from the cleverly designed programme to the seamless transitions on stage showed a staggering amount of consideration for the atmosphere that director Hamish Clayton and his team were trying to create. The stairs leading to the seats were lined with cast members acting as ushers who greeted you with such blank politeness, you could not help but feel immediately suspicious of their motives. The sense of unease was naturally amplified by the starkly lit set and Rob Green’s disconcertingly soothing piano score.

Once the lights went down, the show was a nonstop audiovisual feast. The seven member cast of Alex Colville, Courtney Cliffe, Will Clarke, Henry Fell, Helena Kirkman, Matthew Davey and Connie O’Conor worked stunningly well together as an ensemble. They were larger-than life caricatures when they needed to be, but also disappeared into simply being parts of a well-oiled machine when it was required of them. At no point last night did I notice a weak link or a bored, expressionless face. Every action was deliberate and delivered with just the right amount of conviction. My one note for the cast would be that at times, especially during the first act, lines were nervously stumbled through at near-lightining speeds. Berkoff is a terribly difficult and wordy playwright, and you’ll be doing both yourselves and your slightly confused audience a great favour by slowing down just a touch.

What is perhaps most exciting about 3DTC’s first effort of the year is the incredibly dynamic show that Clayton pulled together with such minimalist set pieces and lighting stages. Producer Hannah Matthews (along with set ‘frame architect’ Jamie Phillips) and lighting designers Jennie Millar and Rob Green must be commended for their understated additions to the production. Above all, Clayton must be congratulated for exploiting every opportunity in the script to bring something new and exciting to the stage. There were times when the use of the theatrical devices such as the frozen tableaus seemed somewhat heavy-handed and unnecessary, but I personally would rather see a production of Berkoff that was too complex than too simple.

Catch The Trial while you can – you may not leave the theatre with a thorough grasp of what just happened on stage, but it is nonetheless and exhilarating experience.