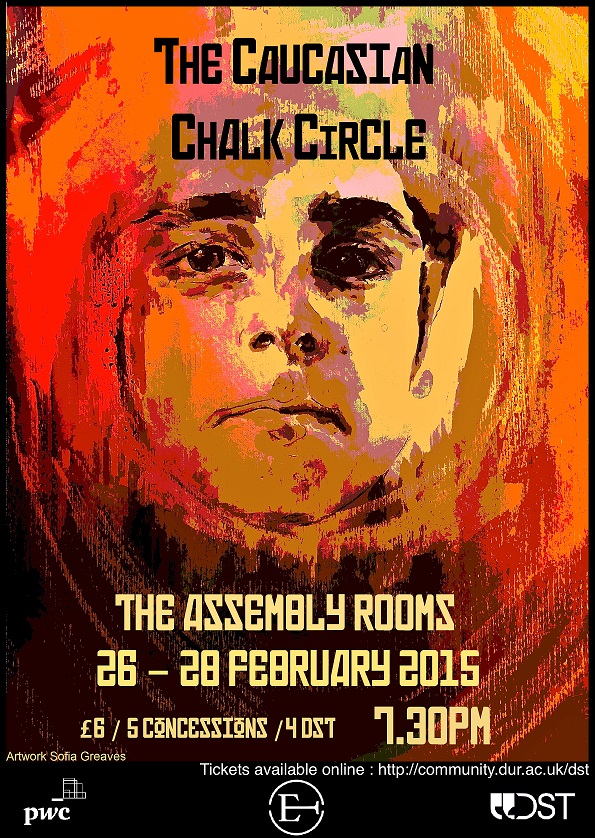 There was a point during last night’s performance of Bertolt Brecht’s The Caucasian Chalk Circle where the thought of scribbling ‘EMBRACE THE BRECHT’ in my notebook and holding it up to the cast briefly crossed my mind. I didn’t do it, of course, because that would have been a highly improper thing to do in a theatre.

That little anecdote perhaps best sums up my main gripe with Ethrael Theatre’s otherwise successful production of Brecht’s classic: despite the deft direction, compelling acting and beautiful music, the production never quite managed to shake off the sense that “this is a bit of a ‘weird’ thing to be doing in a proscenium arch theatre otherwise used for naturalistic dramas”. Perhaps it’s something that Durham actors and audiences are not accustomed to, but as someone who was indoctrinated into the School of Bertolt Brecht is Better Than Sliced Bread at the tender age of 12, I wish the production had been bolder.

The first that I noticed when I walked into the theatre was how the cast were simply milling about out of character, chatting to the audience. Nothing quite says Verfremdungseffekt like talking to the leading lady about songs by the Madonna of Iranian pop music minutes before the show is set to start.

From then on, the Brechtian elements started piling on to great effect. Singer-composer Rob Collins and his band of plaid and jeans clad musicians narrated the story through lovely original compositions that sounded familiar yet foreign, and never detracted from the story. It would have been great had the band been clued in on the style of the play, so that they were watching the performance along with Collins when not playing, rather than trying to make themselves invisible by staring away with steely determination.

The set – made up entirely of a handful of orange cubes, a large slab of wood and chalk – was versatile and very effective at creating the various settings of the play. The chalk drawings on the floor were, in my opinion, underused when considering how much more dynamic the simultaneous drawing and acting made the production. Also underused was the three-year old puppet child made by creative consultant and resident “Brecht-spert” Sam Mckay. I had absolutely no problems with the plastic baby that was used throughout the first act until I saw the raggedy gauze puppet – having a similar puppet baby from the start would have been a lovely touch.

One aspect of the production that perhaps didn’t work as well was the staging, in that quite a few scenes were dangerously close to being entirely blocked by the band, at least from where I was sitting. While I quite enjoyed seeing the actors at the back of the stage, either changing, drawing or watching the action, the remainder of the stage – and in particular the apron – could have been better used to prevent scenes seeming cramped.

The actors generally all seemed to have to a good grasp of the play and worked well as an ensemble, though there were a couple of weaker links. Ellie Bowness was hilarious as the larger than life Natella Abashvili – particularly when interacting with Carrie Gaunt as her jittering servant – though seeing her adopt a similar tone and mannerisms for all other characters she played diminished her effectiveness as the Governor’s wife. Similarly, a few of the actors failed to match the energy of those onstage with them, coming across as either cringeworthy in their over-exaggeration or disappearing entirely due to a lack of conviction. The frantic scene in which the servants are packing Natella Abashvili’s things struck just the right tone, and I’d encourage the actors to keep up that level of energy and engagement.

Pegah Moradi as Grusha and Harvey Comerford as Azdak both found the perfect balance in making their characters compelling but not so much as to distract from the overarching purpose of Brecht’s play. Both also delivered fantastic musical performances that really added to the production, which unfortunately cannot be said of when other cast members stepped up to the microphone. Those moments had the unfortunate side effect of being more grating than distancing, especially as the delivery was often mumbled and unintelligible over the music.

Perhaps I didn’t leave the theatre entirely conscious of Brecht’s intended message – dodgy (perhaps even unnecessary) regional accents and nervous first-night stumbling over lines made it difficult to fully absorb the dialogue; and there was a distinct lack of the topical allusions typically employed in Brecht productions that are intended to make the play resonate with contemporary audiences. But that doesn’t mean that director Leo Mylonadis didn’t succeed in putting on a highly recommendable introductory crash-course to Brecht. During a 2010 performance of The Threepenny Opera that coincided with one of Germany’s FIFA World Cup matches, an actor walked on stage during a protest scene holding a sign that had the game’s score on it. That extreme level of self-awareness is entirely acceptable in epic theatre – I just hope that we’ll see more of it now that Ethrael Theatre has so wonderfully reintroduced it to the Durham stage.