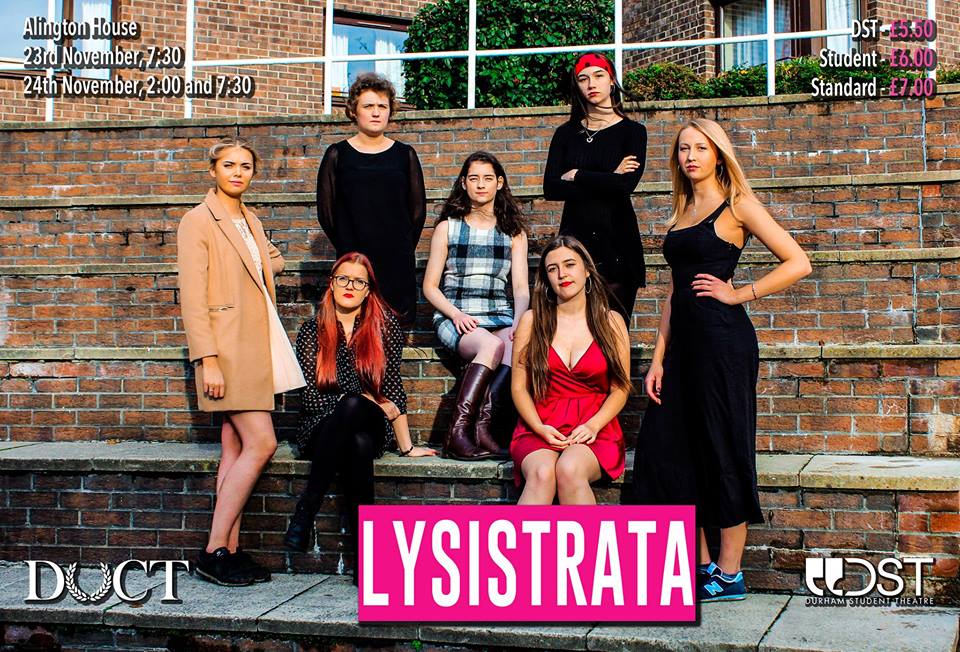 DUCT’s Lysistrata is a comedic masterpiece as the women of Greece try to stop the Peloponnesian war, abstaining from sex as they attempt to drive the men insane, which is unsurprisingly effective.

Giving Lysistrata the unrestrained anger and sarcasm we all wish to use when men make stupid decisions in power, Iz McGrady held a power within her role which permeated the play. Whilst the rest of the cast were strong, her performance was nuanced as it meandered between comedic and held real weight behind her words. She still retained the comedic value throughout however, as did the rest of the cast. Here, Eleanor Storey became more of an asset as the show continued, her stage presence increased, and her delivery was one of the strongest amongst the cast. Sometimes, for others, it would stray into the melodramatic whereas Storey toed the line, often making her performance.

The male cast were just as strong, even if they weren’t necessarily given the roles which allowed them to show their range. They were meant to be perceived as over-exaggerated and ridiculous, which the actors exploited to its full effect. Jacob Freda’s “scene” allowed him to fully overdo everything the play allowed him to as he gave a performance heavily, heavily laden with innuendo and was one of the comedic highlights of the night.

In the face of the script, the actors’ use of a “massive cup” and “flame” were hilarious. Often, in student theatre, resources are limited, and it was clever twist to show awareness of their lack of means and use it to enhance the production. Sophie Boddington’s direction in general here was clever, as the actors used the space. Their movements over-the-top, their acting expressing horror and the fight scenes being just as much fun for the audience to feel involved in as to watch. In the small space of Alington House, as the actors interacted with the crowd, it created the essence of you being in the crowd watching it happen. It effectively broke down the audience-actor boundary which can feel quite awkward in such a small space.

Although as feminist as an Ancient Greek playwright can get, the production only exaggerated this further and it was fun to watch female sexuality being placed in prize position over the male’s for once. A crowded performance, in which some slightly awkward dancing at the end and undecided closure would be its only downfall, Lysistrata provides an hour of fun in a quirky take on Aristophanes’ classical play.

Lysistrata is on at 2pm and 7.30pm, Saturday 24th November, at Alington House Community Association.