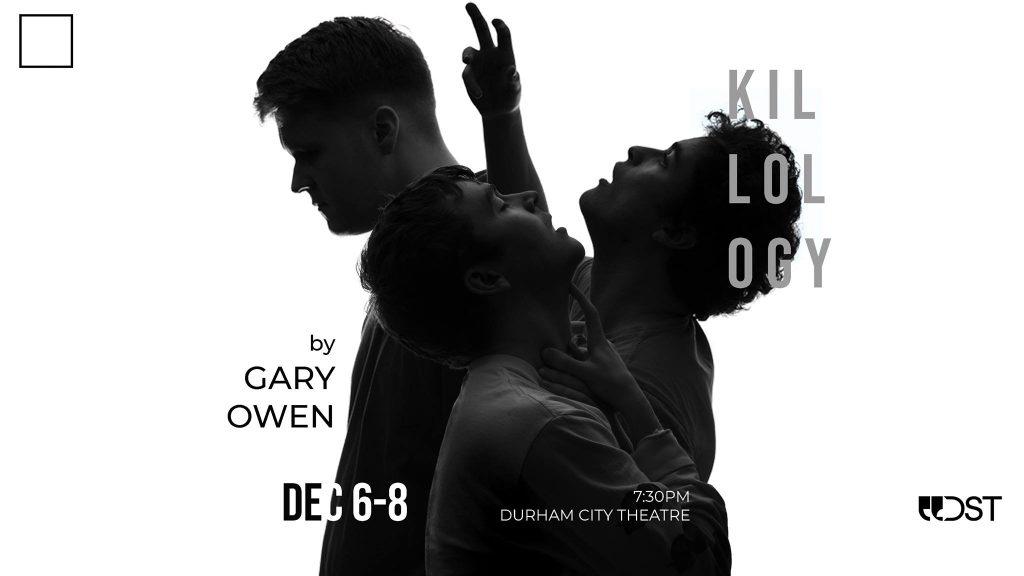 Killology is not an easy play to describe. It’s jarring, it’s often visceral and unpleasant, and it defies any easy conclusions or resolutions. Fourth Wall’s production is also an extraordinary piece of theatre.

In the programme, director Elliot Ancona reassures the audience that the show is “meant to disorientate”, and he’s quite right. Three characters and three interlocking storylines play out in a fragmented chronology, blurring the lines between imagination and reality. It’s one of those plays that is best understood through feeling. The set, even though more of a backdrop than anything else, is where it begins – a desolate, almost post-apocalyptic wasteland of debris that lends itself to this dark, twisted world.

In a nutshell, the plot revolves around three characters whose stories converge on one point: Killology, a game all about acts of murder and brutality. In truth, each story is far more complex than that, and each character far deeper than they first appear. We start with Alan (John Broadhead), externally a maintenance worker but with far more sinister intentions; then switch to Davey (Jack Firoozan), young and vulnerable to outside influences; then Paul (Barney Mercer), the suave producer of Killology. The play’s opening has such drastic tonal switches between the unnerving, the sentimental and the comic that it almost gives the audience whiplash. Comfort and familiarity isn’t the aim here.

Each of the three actors inhabits their role so completely and authentically that it’s worth seeing the show just for the masterclass in characterisation. Mercer is charming, comic and morally bankrupt, both a joy to watch and intensely dislikeable; Broadhead is pitch-perfect at delivering just enough constrained emotion for it to feel like a gut punch. Firoozan’s performance is captivating, simultaneously vulnerable, aggressively defensive and sympathetic. There’s not a single weak moment as the three command the audience’s attention, never feeling tedious or rushed.

But the technical design of the production deserves special mention. From atmospherically perfect lighting states to genius sound design, often using just the most minimal of white noise or similar soundscapes, it lifts the whole production. Far from being obtrusive or tacked on, they feel like an integral part of the show, simultaneously beautiful and devastating.

It’s worth noting that Killology pulls no punches. By the interval there’d been enough instances and graphic descriptions of violence and torture that it was all starting to feel a little bit gratuitous, like controversy for controversy’s sake – perhaps thematically appropriate, but still somewhat devoid any purpose. The second half, however, put those concerns to rest. For a show about violence, Killology has some surprisingly poignant moments, and it’s a true testament to the skill of the actors that both the brutal and the sentimental have an authenticity to them.

Killology is not a didactic piece. However, on occasion, its exploration of the role of media in perpetuating violence did feel a bit heavy handed, even if the show is careful not to categorically assign blame anywhere. Perhaps it’s futile to even try and pick a moral out, but the play occasionally does teeter a bit too close to the well-worn rhetoric that conveniently scapegoats video games as a cause of delinquency. Thankfully this is just one of many threads explored in a complicated piece, and it doesn’t detract from the overall power of the play.

As with anything that deals with the controversial, Killology is not for everyone; as an experience it’s somewhat relentless. But it’s a memorable, impactful show that’s well worth your time, if you have the stomach to face it.