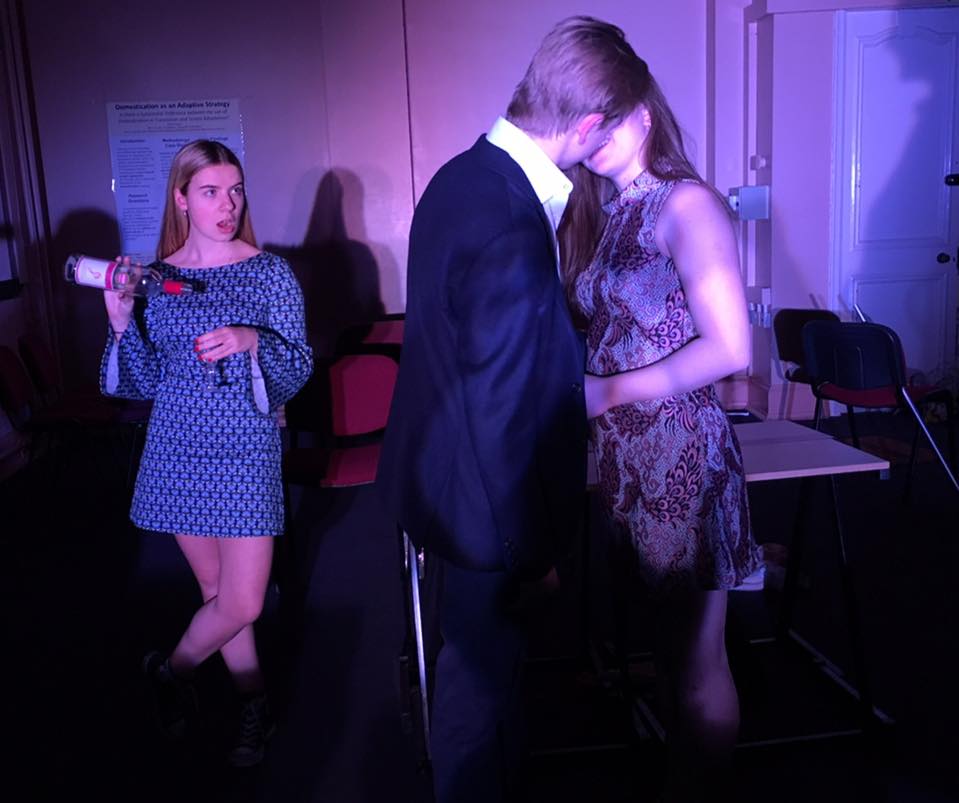 On Sunday the Lion Theatre Company opened its rendition of Black Comedy to much success. Though occasionally rushed in their dialogue, the skilful acting of the cast created a punchy, fast paced, and most importantly hilarious rendition of Shaffer’s comedy.

The play opens on a darkened stage to the close conversation between the scheming amateur artist Brindsley Miller (Tom Duckworth,) and his wife-to-be Carol Melkett (Felicity Challinor). The pair dread the arrival of Carol’s “monster” of a father Colonel Melkett (Griffin Shelton), and the wildly rich art collector Georg Bamberger (Henry de Villiers). The pairs’ situation is further compromised by the wide array of furniture stolen from their wealthy, and tasteful neighbour Harold Gorringe (Ben Taylor), to impress Colonel Melkett. The dialogue in this opening section is slow and basic, almost to the point of tedium, though blessedly short as a fuse is blown plunging the stage into light and truly beginning the play.

The octet of actors wholly and skilfully captured the feeling of being “in the dark” that so often poses a challenge to the staging of this performance. Duckworth in the role of Miller was particularly effective, continually crashing into chairs, tables, and even other characters on the cramped stage, much to the growing anger and confusion of Colonel Melkett. Their onstage chemistry was frequently on display, with the strong old-fashioned Colonel continually placed at odds with the flighty, devious, and somewhat pathetic Miller.

In contrast with the excellent physical theatre the dialogue between characters was often left lacking, with several important jokes breezed through without providing the audience with the time to appreciate the humour of Schaffer’s writing. Notably the long drawn out dialogue between Miss Furnival (Maddie Lock), and Gorringe in the mid part of the play was largely forgettable, seeming to only provide a backdrop to the continued physical hijinks of Miller.

By contrast when given appropriate time and focus with which to work their lines, elements of the dialogue truly shone through. Furnival drunkenly ranting towards the audience, and Clea (Henrie Allen) angrily exposing Miller’s unfaithfulness marked notable high points in the play as these long streams of dialogue allowed the actors to lavish the appropriate time on delivering their jokes.

A special commendation must go to Mr Shelton whose portrayal of Colonel Melkett was so often the cause of amusement. Shelton’s intonation and facial expression created a wholly convincing portrayal of the old fashioned and quick to anger Melkett, with a certain scene towards the end of the performance in which Colonel Melkett wem (quite literally) purple in his enraged ranting, marking a true high point in the performance.

Credit must be given to the creative team, led by director George Chilvers, for the play came to be as successful as it did through them. All in all, the cast provided an excellent performance of a notably difficult comedy. Though some aspects of the performance were lamentably let down by issues with the dialogue, the performance was consistently funny and enjoyable. This reviewer predicts much success in the future of this team of Hatfield freshers, and wishes them luck in their future performances.