Review: Arms and the Man 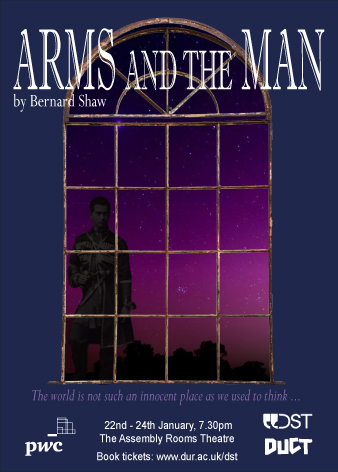 George Bernard Shaw’s Arms and the Man is a curious two-hour play, exploring the highly topical subject of opposing views on the romanticisation of war and the blind idolisation of soldiers through some of the most over the top characters I have encountered on stage. Although I left last night’s performance unsure about the effectiveness of Shaw’s relentlessly farcical script, there is no doubt that DUCT has managed to stage a highly recommendable adaptation of it.

While it is customary in reviews to save praise for the production team till last, their efforts must really be lauded here. Technical Director Caleb Bond’s lighting design was simple yet elegant, even though transitions were at times jarringly quick. The blue moonlight through the windows, the silhouetted night encounter that sets the story into motion, and the colour washes on the mountainous backdrop were all expertly executed yet deceptively effective.

The producing trio of Zoe Coxon, Charlotte Thomas and Elle Pickston have pulled off a truly impressive feat in masking the Assembly Rooms stage’s odd proportions through deft set dressing that is also pleasantly surprising in its attention to detail. Save for the small misstep of the grotesquely large pink ribbon in Raina’s hair, the costumes are also a massive success – they are beautiful, elaborate and appear to fit the actors from head to toe. Speaking of toes, perhaps the easiest way to tell that a production team has paid attention to every last detail is by observing the actors’ footwear. Often in student productions the shoes are the downfall of authenticity, but I am pleased to say that every member of the cast was wearing an appropriate pair.

Finally, director Sam Westwood and his assistant Steph Horrocks deserve much praise for the thorough execution of a creative vision that resulted in eight distinctly drawn yet layered characters. While the blocking of the first act was at times terribly frustrating – many of Raina Petkoff’s (Izzie Price) reactions and facial expressions were completely lost to the audience – it was not a mistake that can’t be fixed with more directing experience, particularly in the Assembly Rooms.

Moving on to the cast, it was quite clear that that many were suffering from first night nerves given the uneven start to the first act. Lines were initially delivered at full speed in mistaken attempts at conveying excitement and urgency, and the first encounter between Raina and Captain Bluntschli (Archie Law) was certainly uneasy, though not for the right reasons. Halfway through the first act, however, everyone seemed to have found their footing.

Izzie Price was a particularly charming presence onstage, and her transitions between delight, disbelief and ultimately the perfect amount of 19th century attitude as Bluntschli recounted the tale of the cavalry charge were a pleasure to watch. Raina’s overdramatic screams of horror at various points in the play may have come across as annoying in any other hands, but Price made each one distinct and perfectly timed to inject the right amount of hilarity into each scene.

On the topic of hilarity, the pairings of Major and Mrs Petkoff (Josh Williams and Erin Welch) and servants Nicola and Louka (Nathan Chatelier and Josie Williams) were easily the comic highlights of the production. Welch’s absurdly high-pitched voice was perfection in combination with her tightly composed facial expressions, and Josh Williams managed to steal entire scenes with a simple grunt. Meanwhile, Chatelier and Josie Williams were at their best when playing off each other, and I couldn’t help but wish that the unlikely romantic pairing would somehow work out if for no other reason than to see them in more scenes together.

Last but certainly not least, Archie Law and John Halstead contrasted each other wonderfully as the perpetually bemused Swiss mercenary Bluntschli and the terrifyingly uptight Sergius Saranoff. Everything from the tension in their faces to their postures and tone was clearly distinct, yet not in a way that made the audience feel as though they were being shown a right and a wrong suitor for Raina.

Before last night’s show began, I overheard two audience members behind me talking about how they’d spontaneously decided to see Arms and the Man with five minutes to spare. I would highly recommend that anyone unsure of what to do with their weekend do the same.