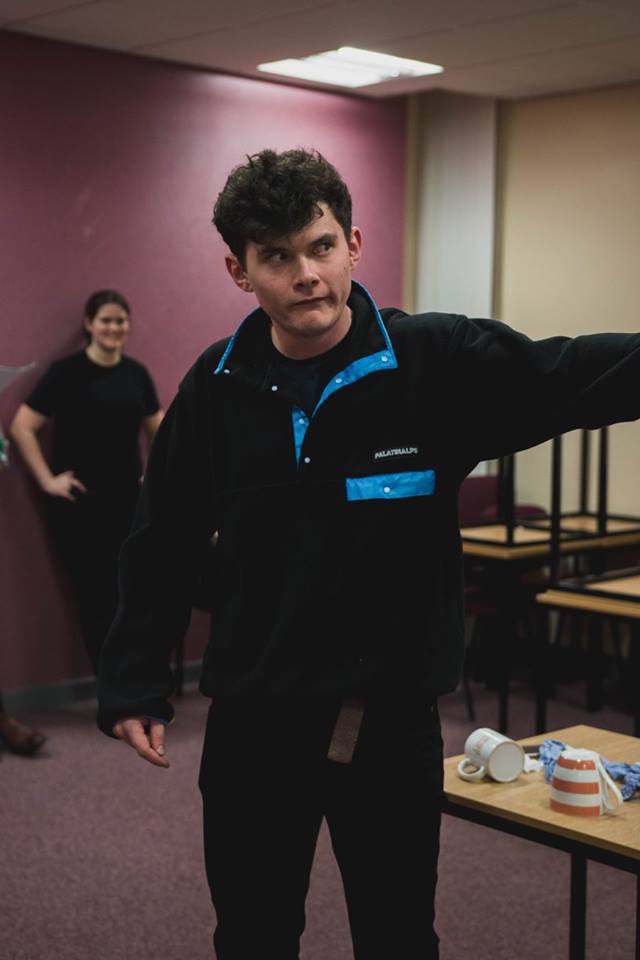 Voices by Olivia Ballantine-Smith was the first in the program. It centres around an unnamed tortured-artist and apparent schizophrenic mourning the recent death of his lover, and while on the whole it went well, it did also feature the most unrealistic doctor-patient scenario I’ve seen since Peppa Pig got a house-call for her cold. I sincerely doubt the cash-strapped NHS has time to be paying house visits to schizophrenic artists, let alone calling them multiple times as they do in Voices, and the Doctor of the piece was extremely unconvincing: he lacked authority or education, and the script gave him very little to work with. Depression, grief, and mental illness are some of the most difficult and hardest subjects to portray and Voices seemed to bring very little new to the table. It played on the same predictable tropes of voices in your head coming alive as people, but these characters lacked force, identity or menace. The protagonist here was well-performed and gave a strong lead, yet this excerpt was underwhelming; bold but unconvincing and I think needs a little fleshing-out before it is able to stand alone and succeed.

By far the highlight of the night was the excerpt from Death as a Salesman by Uday Duggal, a well-written and well performed scene on a promisingly entertaining premise: that Death is seeking a rebrand to drive up the number of dead souls. There was an excellent dynamic between the suffering ad-man, Tony, a classic ex-public-schoolboy gone past his time, and Lucifer, a smooth-talking sleezy hair-slicked-back sort of Durham graduate who swaggers around the stage in an excellent waist-coated suit and tie. The costume and production design were excellent and this was also the play that got the most laughs, with risky but well-playing lines all riffing of the themes of deaths and tragedy. Lucifer was silky smooth with excellent stage presence, working wonders with a well-crafted script that saw him breaking out into a musical number where he used well known taglines such as ‘Just do it!’ and ‘Every little helps!’ to try to sell suicide. This was an extremely well-put together, entertaining performance that I will certainly be returning to see.

Salesman was followed by Writing Left Handed by Nick Chapman which suffered the most by being only an excerpt and needed some serious editing as the performers struggled to project and emphasise the mountainous amount they had to say. Some of the jokes were lost in timing and the fast-paced exchanges lacked humour or clarity. Not only that, but the subject matter was akin to being part of a conversation between a group of people in a bar that you don’t know: it wasn’t that interesting, a bit arbitrary and you didn’t know half the people they were talking about. A strange shift in tone midway through turned the piece from a sort of comic-tense moment about a hold up in a supposed convenience store to an extended meditation on depression and mental illness, but there was just too much script for a true impact to be felt. You could feel the presence of the scriptwriter behind the lines, such was the raw intensity, but the repetition made you feel like you were being bludgeoned to death with overwrought emotion. It was a scene that you felt would have been far more effective if half the lines had been cut, and all the chatter and extraneous information and plot been stripped back to something energetic and raw about the difficulties of mental health and communicating that to people around you.

A clear contrast to Writing Left Handed was the skit that followed: An Unexpected Reunion by Charles Pipe. This was thoroughly entertaining, even if it won’t leave much to chew on afterwards, about two old friends reunited when one of them comes to forcibly collect the debt of another; armed, in a rather surreal but genius way, with a large croquet-mallet. There was some good visual and verbal comedy here as Ed, the hapless debtor, tried to put off his inevitably bashing. Ed was well drawn as disorganised and lazy, like Jeremy from Peep Show; an IT consultant with a penchant for Britney Spears and exactly the sort of idiot to borrow a great deal of money off a gangster and not pay it back. Not all of the jokes quite landed but on the whole, it was amusing and well executed. 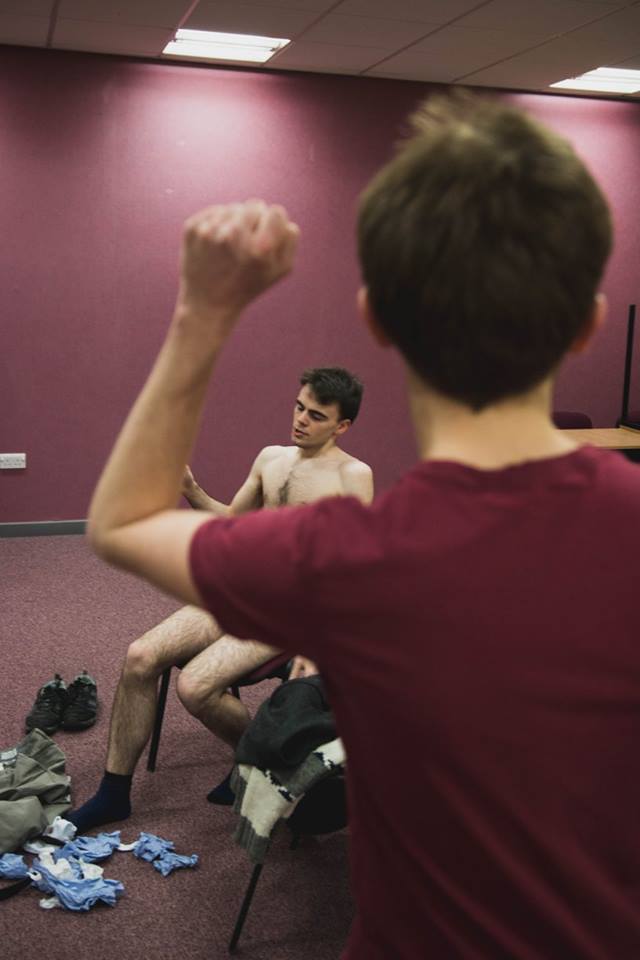 The night ended with an extended improv piece directed by Marie-Louise Wohlre, entitled ‘Living Room Histories’, where the audience suggest a time period and the trope do the rest. I expected a quick-fire thing, with many different time-periods being played out, but instead the trope took their suggestion – eighteenth-century France – and ran with it as an entirely miniature improvised play. This was entertaining, and attested well to the skill of the performers who built up amusing characters and delivered a series of scenes that had an actual plotline as well as jokes and gags. A story made up on the spot is never going to be as interesting as something true time and effort has been put into crafting, and by the end of the performance I was shifting a little in my seat, but I remained impressed by the troupe and would definitely return to see them again. 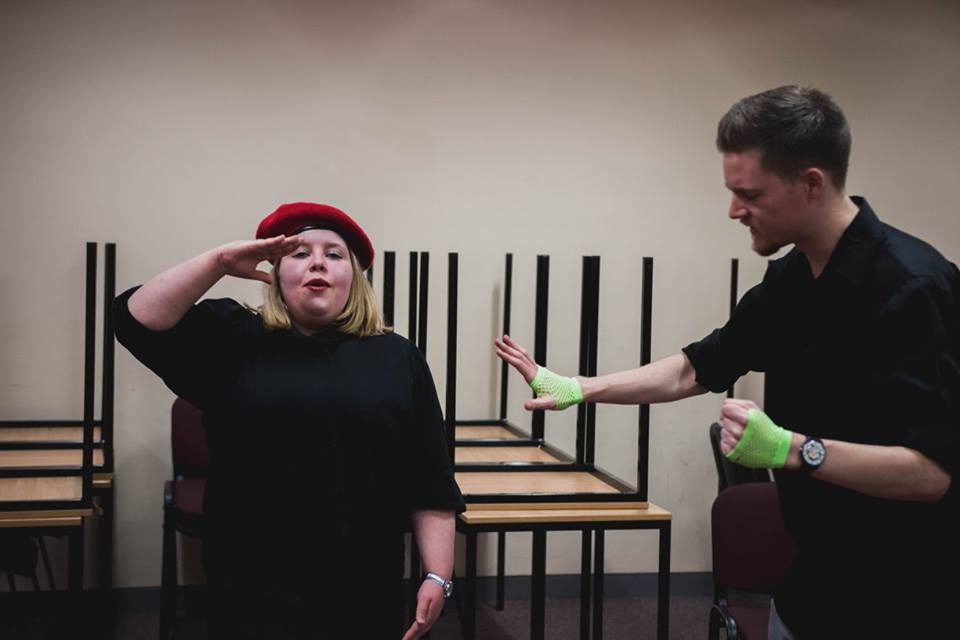 Death as a Salesman and Living Room Histories were my highlights; they both have a lot of potential that I am excited to return and see, but there was great potential in everything I saw. It is a testament to the talent of Durham scriptwriters, actors, directors and designers at how diverse and well-crafted every performance was.