Valentine’s Day is around the corner and the town is full of decorations and chocolates. Have you already had a plan with your boyfriend/girlfriend or are you looking for someone to go out? Of course, love was always matter of concern since old ages. Even in ancient Japan, love was the most important thing in their lives. Some people suffered and then become priest/nun or died because of it at last. I’m going to introduce The Tale of Genji, one of the most famous Japanese classic written in eleventh century along with paintings.

Background of the story

Around tenth centuries, in Japan, it was common to write a poem, called tanka which has 5-7-5-7-7 meter and gave it to anyone especially, colleagues, friends and lovers. Since writing poem is important for their lives, people who had knowledge and techniques to write poem were usually promoted and popular with girls. 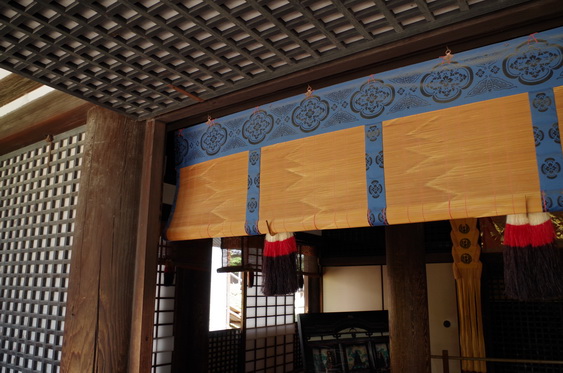 The photo of misu in Horyuji via Wikimedia Commons Also, in ancient Japan, noblewomen were not allowed to show their face in public and they spend most of their time behind a bamboo blind called misu and fabric screens called kicyou.

A scene of the Chapter Takekawa from The Tale of Genji, Tokugawa Museum. via Wikimedia Commons

Noblemen usually peeped women through a gap between them and throw love letters into their house. In this painting, it is illustrated that the man in the right corner peek at women. Then, women replied to it and men finally could enter her room at night if she allowed, though some men broke into a room. More surprisingly, married couple didn’t live in the same home and men came to women’s house. If men came women’s house for three consecutive days, it meant the marriage. Because of this tradition, women usually felt anxiety and miss her partner especially at night.

Men wrote poems not only to meet women but also after they spent a night. Some women even committed suicide if she hadn’t received it on the following day. Generally, it was ordinary for noblemen to have many concubines or lovers excluding one lawful wife. At that time, Japanese word for playboy had a positive impression. It was thought that men who had relationship with many women had aesthetic value and a tender heart.

The Tale of Genji

To put it short, it is the story about the men called Hikaru Genji who is the prince and his lovers and families. He is apparently playboy, had a relationship with many women and wrote many love letters. The first women he fell in love with was the second wife of his father. He made her pregnant and they never told the truth to his father. Then she was suffered and became a nun. Yoshitoshi Tsukioka, The Ghost, From the 100 Phases of the Moon series, the ghost of Yugao on the night of the full moon via Wikimedia Commons

There is of course jealousy between women and those who died. He had a lawful wife, but he did not love her and had relation with other women. This wife died because of the roving and vengeful spirit of the living woman who loves Hikaru Genji so much and was jealous of her. Also, the other women died because of this women’s spirit. This painting describes the ghost of this dead women. The body of the ghost was expressed by light color to make it look like transparent. Since her name is Yugao, which means a gourd in Japanese, flowers and fruit are painted alongside her. Like many paintings of the ghost, she has black hair and wears white kimono, and has no leg. Tosa Mitsuoki, Illustration of the The Tale of Genji, ch.5 Wakamurasaki, part of the Burke Albums, property of Mary Griggs Burke via Wikimedia Commons

After he lost the first wife, he married with the girl called Murasaki no Ue who was a niece of father’s second wife and looks just like her. When he first met her, she was just ten years old. He was attracted by her innocence and wanted to bring up her to become his ideal woman. In this painting, the scene that Genji, the man who dresses in orange, saw Murasaki no Ue, the girl standing and looking at sparrows, for the first time was depicted. Usually, in the painting of people’s life in their house, the ceiling was excluded to focus on people and backgrounds.

Since love letters was the most important thing to date with women, they cared about not only the content but also paper to write on, incense for papers and some branch of flowers to tide with when people send a love letter. The most popular paper to use for love letters was called usuyou, which is fine thin colorful paper. Since this paper has wide range of color and thin, people usually pile two different colored piece of paper according to the season and colors of flowers.

In the Chapter Akashi, there is the scene of Genji and the woman called Akashi no Kimi sent a poem each other by using different papers effectively. In this chapter, he left from Kyoto, the capital of Japan at that time, to Suma because of illicit love affairs. For the first letter, Genji used walnut colored paper imported from Koryo, a part of Korea which is nice and expensive and wrote that he wanted to meet her. But she thought her status was not enough to become his lover, felt much grateful to him, and couldn’t reply. Then her father wrote a poem about her feeling on exclusive white traditional Japanese paper for her. Genji was attracted by her shyness and wrote that he missed her even though we haven’t met yet on soft usuyou beautifully. Then she replied that she wondered that he really like him even though we haven’t met on deep purple paper with good handwriting which has clear light and shade of Chinese ink. It can be considered that this choice of paper’s color had meaning though it is not mentioned in the story. His favorite wife, Murasaki no Ue was in Kyoto at that time and he missed her. In Japanese, murasaki means purple and purple paper implied that Akashi knew that he loves Murasaki no Ue so much and expressed her anxiety.

In ancient Japan, there were interesting traditions about love and marriage and many stories and paintings about them. Why don’t you read other books and look beautiful paintings at this time of the year?