Kandinsky: Synaesthesia and the Spiritual 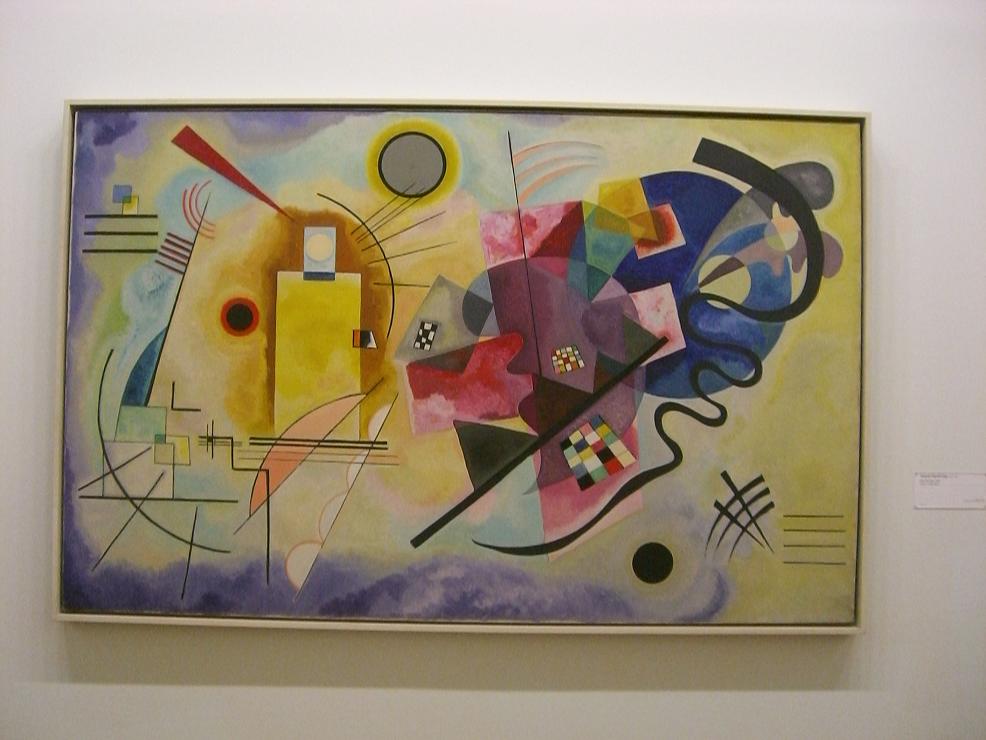 Sensory experience is arguably, what the arts are all about. Art, music, theatre, dance, and even the written word, can act to engage the senses and enflame the imagination, sparking inspiration and enlivening the mind. The creation of art is too, for many practitioners, an immersive sensory experience; painting might elicit a new keenness of the eye; composing music, a renewed sensitivity to the rhythms and melodies of everyday life. For many philosophers this heightened sensitivity evoked by art is something that connects the viewer to a higher plane of thought; through art’s ability to immerse you in your senses, to connect you to your imagination and to move you at a deep emotional level. Some people even believe that art also seems able to touch something even more fundamental, the soul itself.

For an artist with synaesthesia – a neurological quirk in which the stimulation of one sense also triggers a response in another of the senses – this sensory experience is an indelible part of who they are and how they experience the world. Indeed, the word synaesthesia itself is a composite of two Ancient Greek words meaning “together,” and “sensation” – the very way that a person ‘senses’ and understands the world is inflected by this condition. Some synesthetes associate certain sounds with vivid colours or evocative smells, in others; strong emotions might conjure up dazzling colours. You can imagine that this trait would provide abundantly fertile ground for artistic exploration; the synesthete experiences not only the Kantian ‘free play’ of the exterior senses with the interior mind as the mind and the senses intermingle in diverse ways as a means of comprehending the world that we perceive around us; for them there is also a ‘free play’ between each of the senses – sound, sight, taste and touch – themselves as they commingle to create an even fuller and richer type of sensory data, a data that is composed from a whole orchestra of brain signals. With this richness in mind it is no wonder that many of history’s greatest artists, writers and composers from Baudelaire to Van Gogh to Franz Lizt are believed to have had synaesthesia.

In art history, probably the most notable believed synesthete was Wassily Kandinsky, or as Ossian Ward described him in The Telegraph, ‘the man who heard his paintbox hiss’. Kandinsky was born in Moscow in 1866 and first experienced his synaesthesia during his childhood, firstly hearing that otherworldly hissing when mixing paint colours, and secondly when playing his beloved cello, an instrument that, for him, had a sound that was the ‘darkest blue of all’ with ‘the overtone of mourning that is not human’. These formative experiences proved hugely influential to his burgeoning artistic life. As both a painter and an accomplished musician, Kandinsky’s passion for the harmony of sounds and colours manifested itself in his artwork as he sought to create ‘symphonies of colour’, paintings that would stimulate the ears as well as the eyes. Indeed, many of his paintings are named according to the same principles as musical pieces with titles such as ‘Composition’ or ‘Improvisation’ clearly demarcating the relationship of these works with music.

Examining his works in detail we can see how Kandinsky’s method of abstraction creates this symphonic feeling. In Painting with a Green Centre (1913) there is a sense of a vortex, a spiralling inward of the painting towards the centre of the work. The startling red shapes, brash blue and yellow stains, orange marks and sinuous yellow lines all seem to spiral and snake towards the quiet, calm radiance of green centre – a still mark at the centre of a storm. There is a peculiar rhythm to the arrangement of the shapes – it seems that each inflection of colour, each dash of a line, each mark, brings a different nuance to the tempo of the painting. Here the outer edges of the painting have a frenzied, perhaps almost dissonant rhythm, but, in this green centre, there is a contemplative energy and a sense of harmony that focuses the mind, as every whorl effortlessly draws the eye to this middle point. 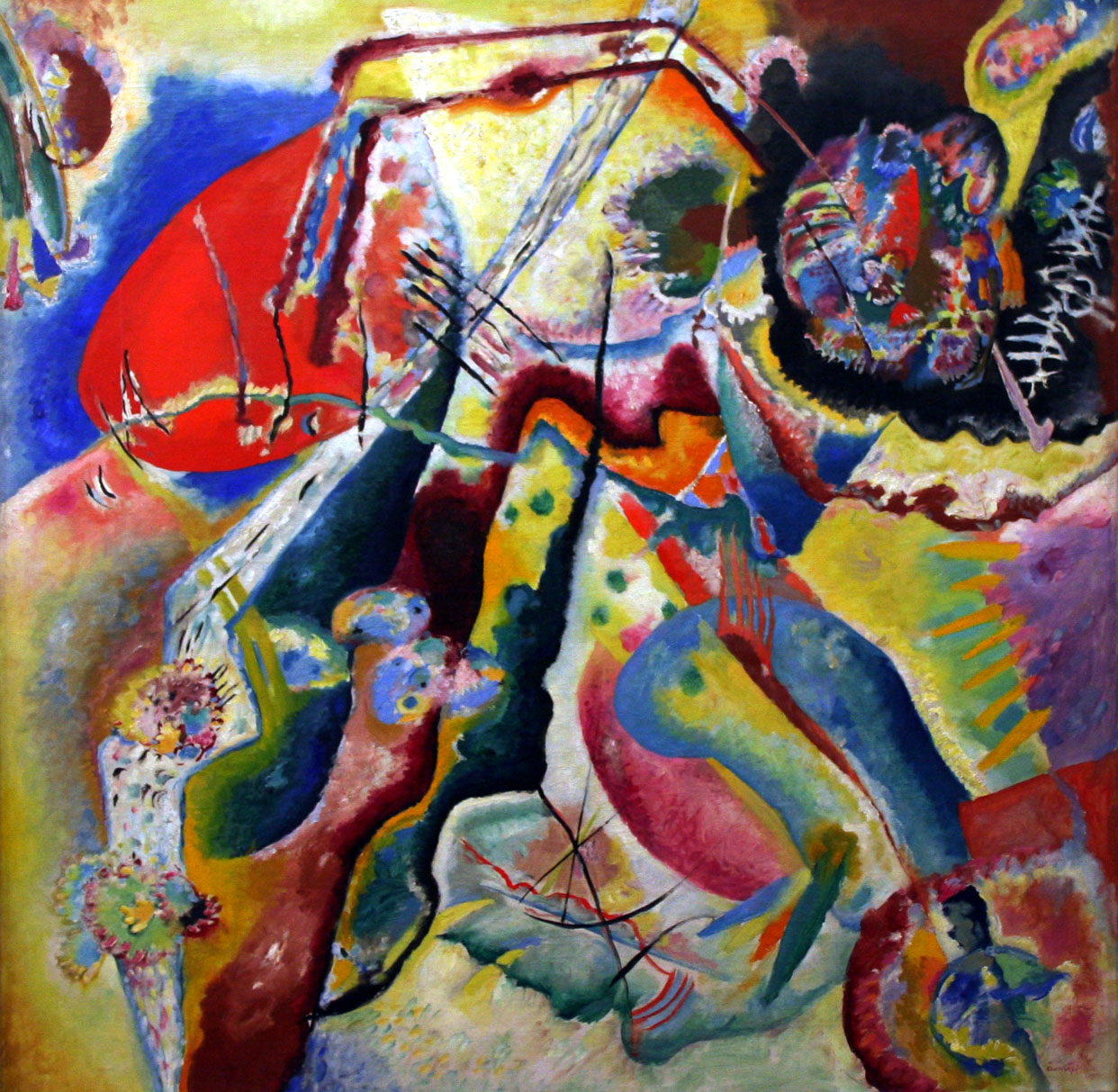 In this way Kandinsky’s synaesthesia seemed to be related not only to the auditory and the visual, but also to the emotions. He stated himself that “the psychological power of colour becomes apparent” when we view a painting, “calling forth a vibration from the soul”. The colour in a painting, for him, is therefore deeply related to the emotional response that it is supposed to evoke.

Bild mit Rotem Fleck (Painting with a Red Spot) (1914) seems to exemplify this idea. Painted on the eve of the First World War the painting is, for Mark Scala, a curator of a current exhibition of Kandinsky’s work “teeming with vitality and turbulence” as it shows to us “a premonition of destruction, the old order tearing itself apart”. We can see this sense of destruction in the fierce anger of the pulsating red spot, in the great black rift that slashes through the centre of the painting and in the ominously bleeding black circle in the top right hand corner of the piece. However, much like the movements of a symphony, there are moments of a different tonality in this piece; Scala also sees in this piece “a jewel-like area of small, colored brushstrokes, hinting at a seed of renewal”, both destructive energy and hopefulness are articulated through Kandinsky’s expressive use of colour, an expressiveness that seems closely related to his synesthetic experience of the world.

Kandinsky’s view of how sound, colour, spirituality and emotion all inform one another is best summarised in his own words. Reflecting on how his artworks from 1913–1918 were made Kandinsky said: “Each work originates just as does the cosmos – through catastrophes, which, out of the chaotic din of instruments, ultimately create a symphony, the music of the spheres. The creation of works of art is the creation of the world.” In creating his works of art for us, Kandinsky opened for his viewers a window to his own, unique, synesthetic experience of his universe.