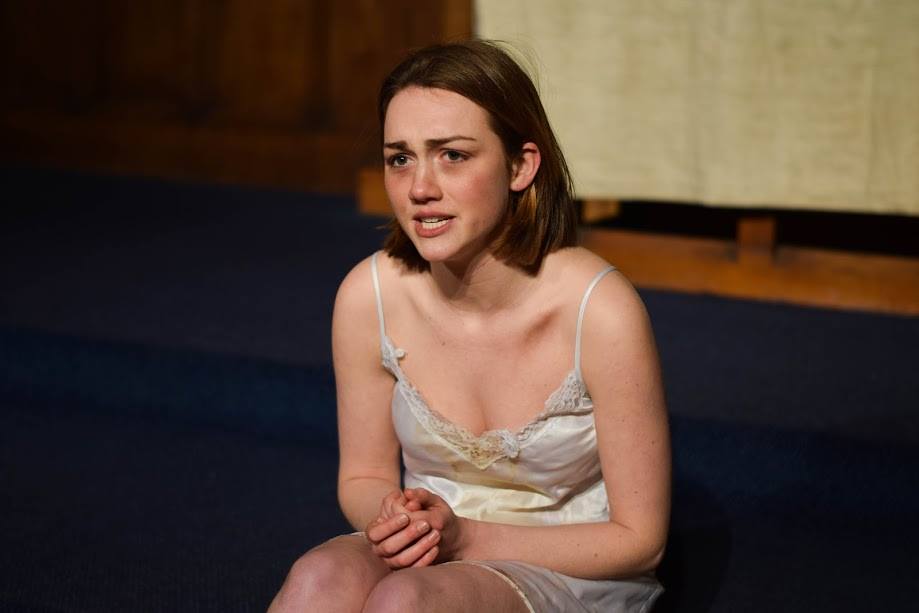 ‘Eve’, by Carrie Gaunt was a heart-wrenching piece about the plight of every woman wronged and disposed of by a man, transposed onto the creation myth with ease. The writing is fantastically poetic – which makes the tremendously difficult feat of the one woman show seem effortless. There is one catch with this play, although it is intensely captivating, if you manage to emotionally detach from the play it’s very difficult to find another entry point, it seems. Luckily I didn’t suffer with this issue at all – Mally Capstick’s portrayal of Eve was impeccable. Eve brings the creation myth out of genesis, in a liminal space between Eve’s own death and the hell she is assumed to become a part of. Eve’s hell could be the act of retelling her story, alone to a silent jury without catharsis for the rest of eternity – it is not clear what her fate is – only that she is damned and locked outside the gates of heaven. The dramatic climax, I found, was Eve’s depiction of shrieking and begging outside the gates – although there were so many emotional crescendos that the play became an extraordinary individualised experience.

The feminist lens presented in Eve was a brilliant indictment of conventional heteronormative sex – ‘you tear me apart in ecstasy’, ‘When you come and I don’t’ where both lacerating lines. Eve is the original wronged woman, who bites back and reclaims language and her own voice to curse back at Adam. The play is tragically empowering for the modern woman – in the unerring sharpness of the script ‘words are another country’ we hear a lone woman reclaim the conventional biblical narrative. Eve is a fantastic rewriting of the mythology of female pain. 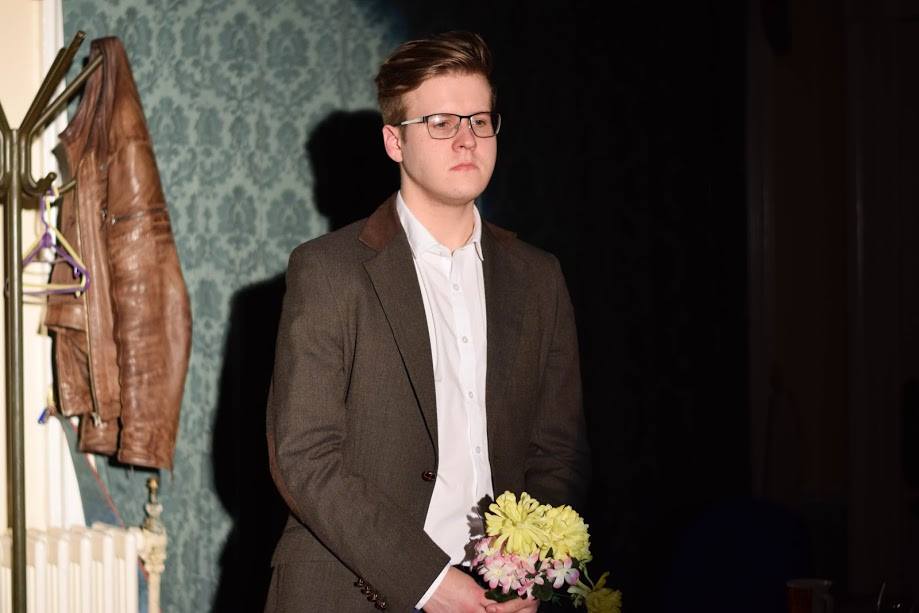 ‘The Empiricists’ by Caspar Bayliss was in its best moments a brilliant exploration of guilt, grief and the roles of the individual in the strive for human progress. Set entirely in a dingy underground CERN office beneath the LHC (Large Hadron Collider), the characters of Werner (Jon Broadhead) and Pavlov (Lewis Russell) unfold in close proximity. The play very successfully explores the dichotomy between the honest, boring truth – steeped in routine; and the fantastical, world of anomalies which entail grand sweeps of progress. Werner wishes to publish the results which indicate a particle travelling faster than light, Pavlov is skeptical and defensive of the scientific tradition. This slowly builds into an exploration of opposing, incompatible worldviews. The battle between the two characters’ opposing ideologies set against their own personal emptiness was captivating.

The play’s narrative frame beginning and ending with Werner’s guilty plea is effective in its establishment of tragedy. However, as the play unravels, some of this dramatic tragedy becomes excessive – Pavlov’s wife is working late and going on a one person holiday to Venice – we clearly know from the offset that he’s being cheated on, likewise Werner’s is struggling with the guilt of his daughter’s suicide. So is the repetition of Oppenheimer’s ‘I am become death’, which on introduction is fascinating but wears thin on the second hearing. The two actors seem to be working in very different styles – Pavlov is manic and smug and slightly over-acted which doesn’t seem to fit with the tone of the script. However, John Broadhead does a fantastic job of portraying Werner’s deep set disillusionment. It’s unclear why both leading characters need to be going through a period of personal crisis – the exploration of mental health and its alienating, distressing effects on Werner are enough to pull the play through, the comic infidelity pushes the rest of the unlikely drama over the edge of reason.

Werner’s sets up three types of science, that which furthers; human suffering (as his relatives did with the Manhattan project), understanding, and the bettering of humanity. This meditation was nuanced and honest, although the comic writing and excessive drama caused the play to sometimes fall flat – its philosophical discussion was incredibly thoughtful. 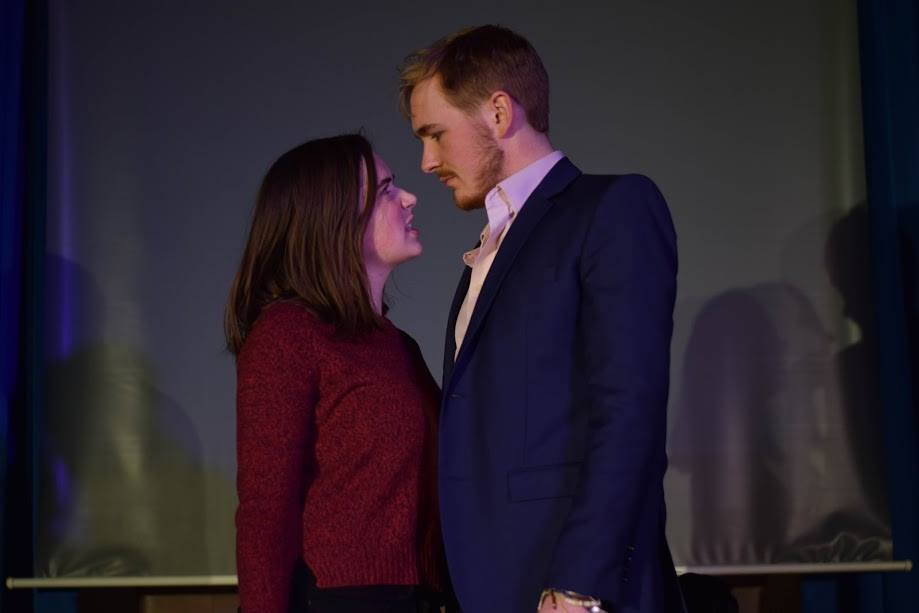 ‘Hypoclitical’, by Kittie Briggs and Andy Ball – was sharply comic and pointedly critical in its assessment of modern expectations of romance and the dreadful courting period. In short, it’s the attempt of two writers; one male and one female, to write a modern rom-com without falling into the conventional, unrealistic tropes of attractive girl meets powerful man who wins her over.  The characterisation was spot on, from the female writer’s relapse into speaking to her ‘egotistical, manipulative’ ex – this exposes the pitfalls of a guilty feminist – she knows she should be acting against her cruel ex-boyfriend, yet she meets him anyway. The play cleverly explores the burdensome, decorative expectations of women in rom-coms and the aspirational ‘modern woman’ – whilst savagely ripping apart the male gaze.

The dramatic flair to this performance was appreciated – both Isla Brendon and Mo Hafeez portrayed the writers impeccably. It was self-aware without being a pretentious or didactic exploration of writing tropes and the mingling between fiction and reality – which is terribly impressive. Likewise the use of visual aides – namely the projected screen which lit up the trope either character fell into, was effective and unconventional

There were countless moments of hilarity and incisive social commentary in this play, and it was impossible not to love the string of terrible puns littered throughout (‘I sex-ceed’, the titular ‘hypoclitical’). But the play dealt with more than just comedy – workplace harassment and sexual violence were exposed with maturity in the play. The female writer exclaims that it ‘wrote itself’ when the male lead is forced into a compromising position with his potential future boss.

Overall, I thought ‘hypoclitical’ was a multi-faceted exploration of modern representation, and would gladly see it again.