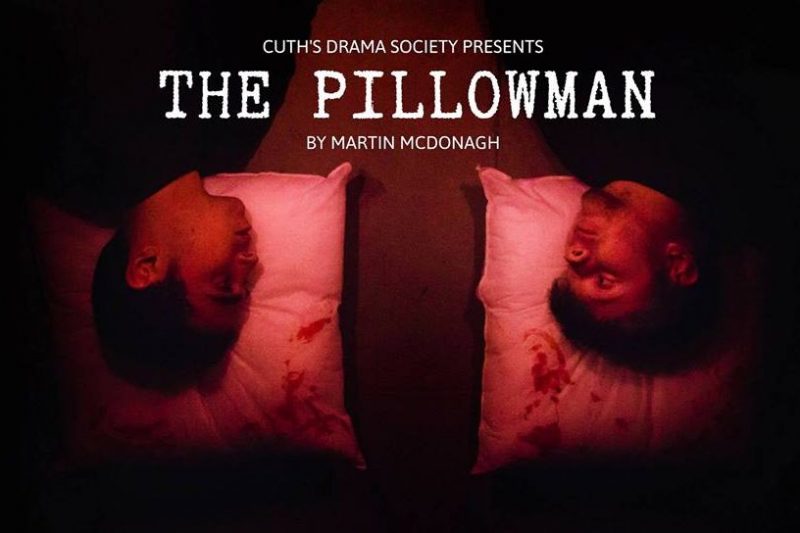 In its conviction, its visual power and unapologetic command of black comedy, CDS’ production of Martin McDonagh’s The Pillowman is a triumph.

Set in a totalitarian state, The Pillowman is centred on Katurian (Alex Cohen), a short-story writer, who is interrogated by Tupolski (Iz McGrady) and Ariel (Matt Redmond) after his gruesome tales were made a reality by his ‘retarded’ brother Michal (Joe Pape).

You would be hard-pressed to find a piece of theatre so shocking and casual in its handling of themes such as death and child mortality. Rachel Tan and Lauren Gardner, however, register the dark and febrile energy of the play masterfully. With a running time of two and a half hours and being set in only one location, the ensemble cast’s deeply sordid yet comedic verbal interplay manages to sustain the audience’s investment in the action.

The audience were welcomed by Katurian sitting on a chair with a pillowcase over his head, whilst eerie and distorted songs such as ‘Pure Imagination’ and ‘Mr. Sandman’ lingered in the background. There was no sense of security and there being nowhere to hide. From the programme, the audience were fully aware of the directors’ intention to make them think – ‘through laughter or distress’. Nevertheless, Tan and Gardner’s exploitation of the play’s comedic potential was perfectly balanced as they refused to allow the audience any opportunity to get comfortable. Once the audience became comfortable in a comedic sequence, they were emphatically reintroduced to the unsettling universe of the play. That being said, the casual treatment of unsavoury themes gradually became naturalised and the ever-increasing readiness to laugh indicated a gradual desensitisation to its themes.

Alex Cohen and Joe Pape delivered first-rate performances and their brotherly tenderness, albeit momentary, added a sense of warmth to an otherwise dark and twisted atmosphere. Pape even managed to induce plenty of sympathy for his character despite his morally indefensible actions. Iz McGrady and Matt Redmond also seized the complexities of their characters and their thorny dynamic added another enjoyable layer. Despite their initial image of tough interrogators, unswerving in their moral rectitude and levelheadedness, their human frailty is uncovered by the end.

That is the beauty of this performance: the directorial and artistic vision was spot-on in its subversion of expectation, shock-factor and capacity to force the audience to consider both the morality of the characters and also their own. Sometimes it felt wrong to laugh, but it was impossible not to (as was the case in ‘The Little Jesus Story’). In the best way possible, watching The Pillowman was an uneasy experience, compounded by the uncomfortable pews that the audience sat upon. Like Katurian, we were being interrogated: forced to make character-judgements and consider why we felt sympathy for them.

CDS delivered their intention of exploring ‘the fine line between reality and the disturbed imagination’ and their production elements helped to sustain and intensify the overriding nightmarish mood. The ‘disturbed imagination’ became a tangible and horrifying reality before our very eyes, supplemented by physicalised re-enactments of Michal’s stories by Hatty Tagart, Cameron Ashplant and Isobel Flower. The UV paint streaked across the back wall, the gun situated constantly by Tupolski’s side and the electric chair placed backstage consolidated the ever-present sense of danger. McDonagh realised ‘something dark’ about fairy tales, and this production succeeded in extracting such darkness and transformed it into an uncomfortable yet visually powerful experience. As advertised, it is a ‘private play’ and, through its brilliance, enables a way of thinking without losing that feeling. It will make you laugh, but also squirm, and I urge you to give it a watch.

The Pillowman is on at 7pm, 16th-18th November at The Durham Union Debating Chamber.