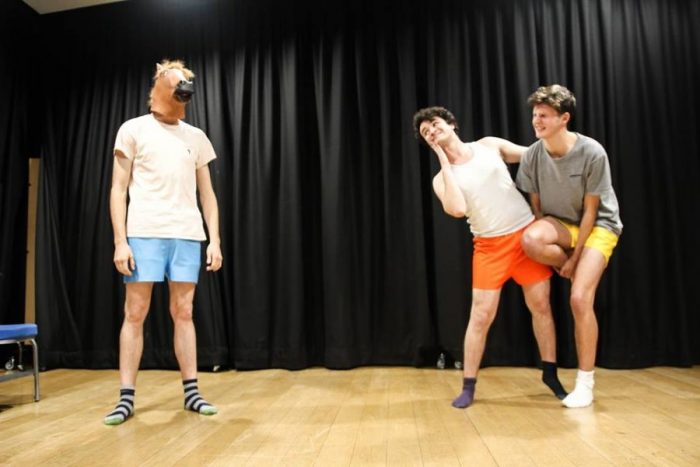 Coming off the Edinburgh Fringe, KEITH. Presents KEVIN., brings their easy humour back to Durham. Performing sketches which are mostly original, with some re-used material from last year, their show lands consistently even if the material is sometimes a bit indelicate, to put it lightly.

What stands out, is the charisma of all three performers. Perhaps some of the material has been done before and not all of the jokes are to everyone’s personal taste, but their delivery and chemistry as a group really works. The element of the home crowd can’t be forgotten, in Durham it can often drive performances, but here the troupe bounce off each other as well as having their own sketches in which they excel.

For Andrew Cowburn, he’s reliable throughout the show and he leans well into the role of exasperation he often plays against other characters. It is interesting to see how the dynamic has changed from last year’s troupe. Both Barney Mercer and Mungo Russell easily manoeuvre through the sketches, but it would be great to see Mercer more. It sometimes feels as if he doesn’t receive as much stage time, even though he is just as capable as other troupe members. For Russell, his versatile delivery is refreshing, he is good with deadpan and the overtly comical, with the Noah’s Arc sketch being a particular highlight of his performance.

Although their longer sketches are funny, it is the shorter, more abrupt ones in between which are funny and snappier. The black t-shirt skit starts out as a token social commentary joke, but as it is made a recurring joke throughout the show it becomes increasingly comical. In this vein, the Mark Zuckerberg sketch is simple yet effective, as is the Spartacus sketch. The James Bond skit feels slightly tired though, literally and comically.

An element of self-awareness and ability to play on the audience’s expectations is always welcome. Here, the poetry readings and the “French” soldiers sketch plays admirably. Sometimes it can feel like an attempt to save face if the show isn’t going too well and doing something disgusting is always an easy laugh, but it didn’t feel forced.

Pretending to have a stroke onstage for comedic effect probably isn’t the most politically correct idea they’ve put in their show, neither is the sketch about suicide bombers or the suicide hotline. When watching though, you want to laugh but you also feel like you shouldn’t. It’s a blurry line of where you should stop for the sake of comedy, and personally I’m not sure where KEITH stand.

Generally, interlude music can be clunky as it cuts off abruptly to deliver the sketch. Here it works though, it’s upbeat and adds an element to the sketch performed beforehand. It makes the show slicker and works in a way which other comedy groups in Durham haven’t been able to use as effectively.

Made infinitely better by the delivery and chemistry of the troupe, and they’re only going to get better, KEITH. Presents KEVIN. is an agreeable way to get back into the comedy scene in Durham.