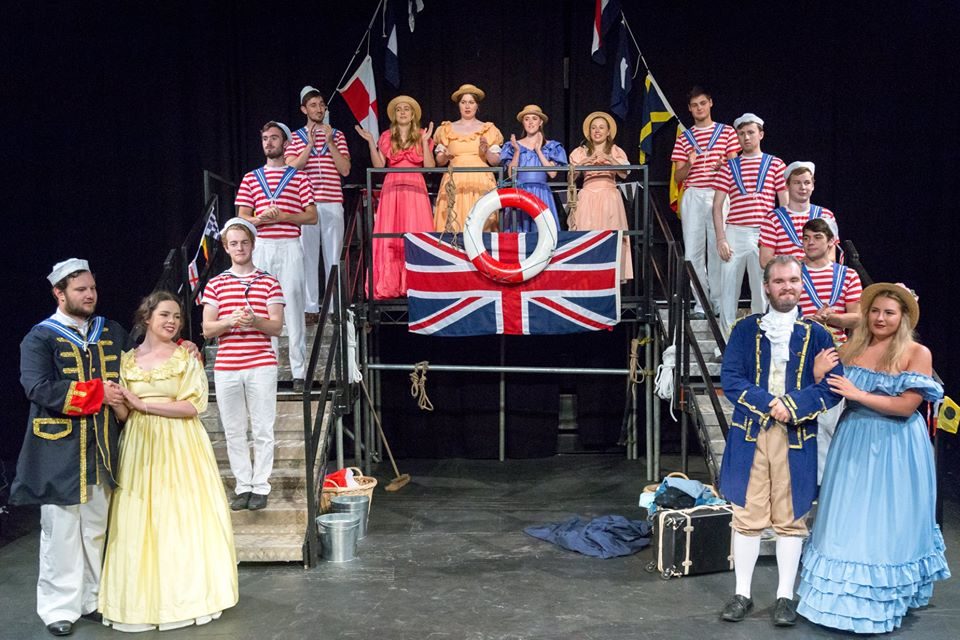 In the August of 2018 I was treated to a DST first as Durham Opera Ensemble took to the theatrical scene of London. What show could be better for such an occasion than Gilbert and Sullivan’s delightful, quintessentially British classic: HMS Pinafore. Incoming DOE president Rosie Burgering must be praised not only for performing wonderfully herself as Hebe, but for the huge amount of work it has taken to steer DOE into the previously uncharted waters of touring theatre.

Marleybone’s Cockpit Theatre provides a challenging but spacious venue – A blank canvas upon which the cast and creative team have conjured the image of a 19th century naval vessel. Putting on an (almost) operetta in the round is no mean feat, but the proximity of the audience to the actors brought an intimate feel to a show that could easily seem somewhat distant and pompous.

The very beginning feels a tad shaky, with the house lights blackout coming a while before the start of the show. The overture, whilst beautiful, seems a little too long to be played entirely in darkness and would benefit from some movement or choreography of the cast to set the scene.  Fortunately, the chorus’ opening number instantly draws the audience into their little world. The chorus generally performs very well – the singing is fabulous from the whole group, although sounds sometimes blend a little unevenly with certain individuals’ voices being more overpowering than others. The acting is believable and amusing, and the choreography is simple and effective. It provides the right amount of movement to lift numbers without detracting from the music, undoubtedly the greatest strength of the production.

The band, under musical director Theo Golden, plays fantastically throughout. Any sign of slip-ups are few and far between, their only issue being occasionally drowning out solo singers, particularly Hannah Ambrose’s Josephine. The singing is outstanding from everybody, especially whole cast numbers such as the Act One finale– rousing, cheery and thoroughly enjoyable. Ambrose and Catherine Bench (as Little Buttercup) both have beautiful solos, Bench easily commanding the space with her voice and Ambrose, although delicate and occasionally overpowered, hits notes with ease and beauty.

The male leads are also outstanding – Alex Akhurst’s truly beautiful voice soars with ease, garnering sympathy for his portrayal of Ralph Rackstraw right from the off with his flawless performance of The Nightingale. Henry Chapman as the captain handles difficult, pacey songs effortlessly and clearly, whilst Adam Brown’s Sir Joseph Porter sings well and has the audience in fits of laughter.

The cast’s acting is also very strong, although it doesn’t always consistently reach the same high standard of the musical performances. The standout actor for me is Brown, whose comic timing both in dialogue and singing keeps the audience in stitches throughout the show. Chapman’s captain is also by no means short of laughs, and his shift of emotions throughout is well measured and believable, as is Bench’s. There are however, a few moments which feel a tad awkward or somewhat underplayed. Akhurst, whilst confidently portraying a likeable and sympathetic character, occasionally falls into the trap of repetitive gesticulation and lacking pauses in important dialogue.

Director Alabama Jackson has gained strong, believable performances out of her cast and should be commended for this, as well as the slick blocking of a show that could have proved very hard to stage. However there are moments, such as the more emotional exchanges between Josephine and the captain, or between Josephine and Ralph, which feel like they aren’t quite afforded the time and emotional weight they deserve. Simply slowing these down, picking points for pauses and bringing out more heightened emotion would greatly aid these scenes.

On the whole, the whole cast and crew of DOE’s HMS Pinafore should be thoroughly proud of their work. It was clear they had achieved the greatest indicator of success that a show can – the audience’s enjoyment. To take a show on tour for the first time, sell out in London, and provide this level of entertainment, I offer my sincerest congratulations to the whole team.