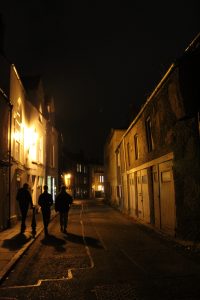 Light from street lamps cascade before me. The city of Durham has a peace to it at night. As I walk, music plays. This is night music. Music that pierces, envelops, fades into dark.

As I walk to collect a parcel that won’t be there, I listen to Singers by Mount Eerie.

Mount Eerie is one of many projects which Phil Eleverum has helmed over the years. His music is best characterised by a quiet sadness, wherein hope – on occasion – shines through. Singers is no exception to this, though is in some ways an exception sonically.

Eleverum sings accompanied by a single acoustic guitar, weaving a tale of snow and sadness. He meanders through his phrases with a morose knowing. All until, like a blast of warm air, the singers enter:

‘Let’s get out of the romance’

A glimmer of hope in the album’s opening song.

The singers sound like a small church congregation. They sound both hesitant and urgent. Some sound as if their sole musical guide is the person standing next to them. There are no mistakes here. This is a peculiar warmth which is a welcome respite from the harsh cold of night. 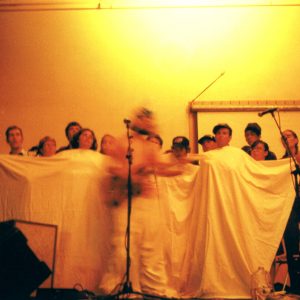 ‘I send them off” they repeat again and again. Through ‘I Cut My Hands Off’ a sense of collective voice is cultivated. A lone singer begins, and the rest join. We are in this together, they seem to say.

Joy is followed by disbelief. Disbelief followed by grieving. ‘I can’t believe you actually died’, doesn’t sound that sad even taking into account the bleak lyrics. But it is.

I sense, as I walk through the dark, a sense of disbelief, this overwhelming sadness. The songs hint at something greater, but lay to rest in the confusion to which they began.

I don’t particularly know what’s going on in my own life for a large majority of the time. I feel a lot of people can share this feeling with me. When life happens, we don’t know how to react. Or even how to process what we feel.

As I walk through the never-ending winter night, I hope that I manage to see hope shining through. The idea that, as I reach my destination, hope will find me. Maybe, or maybe not.

Its only later in the night I find the parcel not there, my hope unfulfilled.