Yosemite: From Dawn to Dusk

Sunlight pours down the granite cliffs as dawn breaks in Yosemite Valley. The misty meadow is gradually filled with golden rays, giving the dewy grass and flowers an ethereal glow. At this silent time deer tip toe freely through the meadow, disturbed only by the occasional photographer. It is irrelevant what camera you have to take pictures here; you already have a beautiful photo right in front of you.

Bursting with 160 rare plant species and unusual geological formations Yosemite is a National Park spanning across eastern California. Amazingly the valley itself (the most developed area and tourist honeypot) only represents 1% of the park area. Almost 95% of Yosemite is wilderness: barely touched, sometimes dangerous, but home to outstanding natural beauty. Yosemite is famous for its alpine meadows, granite mountains and crystal streams, as well as ancient groves of giant sequoia. 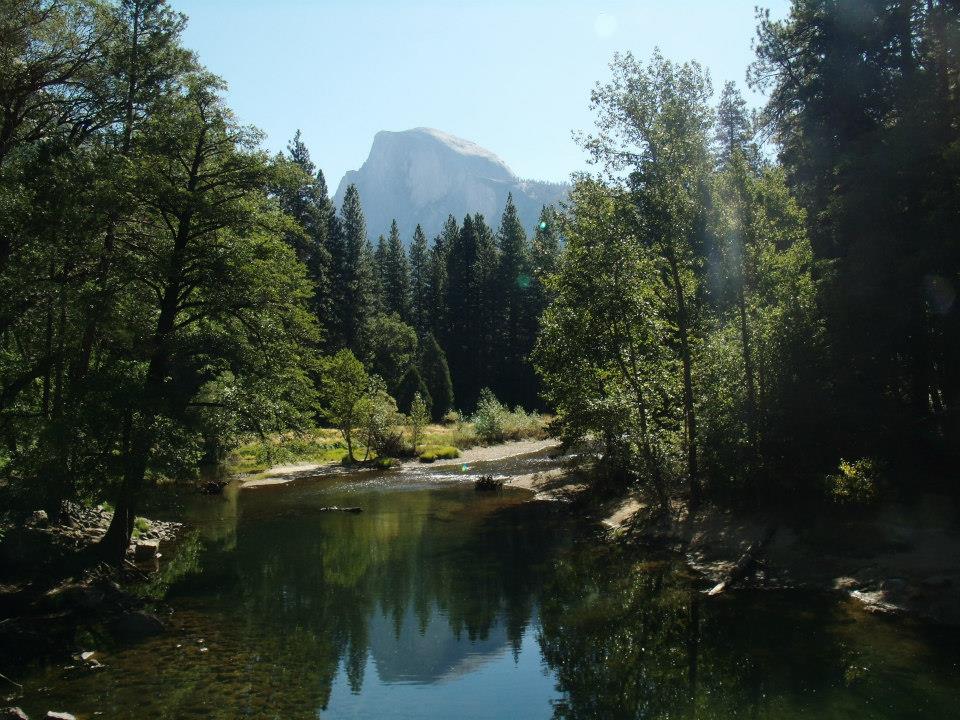 As the sun continues to rise the early morning chill quickly wears off and temperatures warm to around 25 degrees Celsius in the summer. The day beckons all visitors to explore the wild scenery, whether strolling in the meadows or lower forests, or venturing above the tree line and scaling Half Dome. The vertical dawn wall of El Capitan is frequently described as the hardest climb in the world; only recently was it finally conquered by Tommy Caldwell and Kevin Jorgeson in January 2015. However if you’re not a professional climber you still have 800 miles of hiking trails to choose from. Vernal Falls is one of the most popular walks in the park. The hike is about five and a half miles, sometimes steep, but rewarding when you reach the falls. Across the plunge pool (which some people swim in) a rainbow can often be seen. If you want a better view you can leave the path and climb across the rocks to the edge over-looking the pool. The spray from the waterfall cools you down and the photo opportunity is unmissable. The route eventually joins the John Muir trail, (a 340km hiking trail across the Sierra Nevada) which winds down around the mountains to the valley floor.

Hiking works up a hearty appetite and luckily there are many options in the valley, particularly in the Curry Village and Yosemite’s old village. Some are casual: there are cafes, pizza places, and delis. Alternatively there is the Anwahnee Hotel Dining Room which despite being more expensive, has a delicious selection of award winning dishes. The village is the most developed area of Yosemite with a few shops and restaurants. You can rent bikes or go swimming, all with the back drop of El Capitan and Half Dome. The village also features its own museum which includes exhibitions about the formation of the valley and its mountains, as well as the history of the Native Americans who first inhabited Yosemite. In the backyard is a recreation of a native village, complete with wigwams and deer casually strolling around.

Another option to consider whilst in Yosemite is driving up to Tuolumne Meadows. Located two hours’ drive from Yosemite Valley and much higher up in the mountains, Tuolumne is celebrated for its wild surroundings and backpacking base camp. Accommodation consists of permanent tents which are equipped with camp beds, table and chairs, and a wood burner. Staying in Tuolumne is much more basic than options in Yosemite village yet this only serves to enhance your experience; you’re much closer to the wilderness, you have to keep your fire going and pack food into bear proof containers.

The most popular hike in Tuolumne is up Lembert Dome. The walk is very steep so if you’d rather a less strenuous day there are many options to explore in the meadows and lower mountains. The summit of the dome can be reached in about an hour – it’s intense but short. After climbing through the forest dappled with sunlight the rocky dome appears suddenly, white and windy. The rock expands upwards above a sea of green. However to reach the ultimate peak of Lembert Dome there’s the challenge of scaling the even steeper side to the top of the boulder. Once there you have a complete 360 degree view of the Sierra Nevada range. Streams sparkle in the sunlight and white mountains tipped with glaciers stand out amongst the blanket of forests.

When the day begins to draw to a close and the temperature suddenly drops, hikers weary and covered in dust return to the camp. The community at Tuolumne is intimate and social campfires are held every evening – songs are sung and marshmallows toasted. As the night deepens star gazing is breath-taking in Tuolumne. Because there is very little light pollution (people just carry around lanterns) the stars are incredibly clear and you can even see the Milky Way. The only thing to watch out for are the bears that emerge at night to forage for the forgotten food careless visitors have left behind. Yet that tiny hint of fear is exciting; it proves how deep in the wild country you really are. Sitting on a log outside your tent, surrounded by forests, mountains, nature lovers, passionate rangers, warm campfires, and above you only stars – that is the best way to end your Yosemite adventure, until the sun rises again.