Travel in Southeast Asia with a Nut Allergy: My Experience

Should a food allergy prevent you travelling around the world? Surely not.

This was my assumption when signing up for a trip to Cambodia this summer; my peanut allergy did not cross my mind, rarely thinking twice about what I’m eating in the UK where I simply avoid anything that explicitly contains peanuts. In fact, it was rather close to my departure that I began to really consider how difficult managing my allergy would be whilst travelling within Asia. I turned to the internet for advice.

Big mistake. Scrolling through countless websites, blogs and articles about travelling within South East Asia with a nut allergy I was faced with almost blanket negativity. Some sites emphasised how incredibly careful you would have to be, others warned people to abandon their plans altogether. Naturally, this filled me with anxiety. With the trip coming I quickly began to pick apart why exactly the perceived risk was so high

Certainly, travel in general with any type of allergy can be a challenge. The risk of travelling abroad for severe and fatal food allergic reactions hasn’t gone unnoticed. The tragic case of a girl dying after eating a Pret Sandwich on a British Airways flight to Nice occurred just earlier this year.

From my online research, I received the impression that South East Asia, in particular is a difficult area of the world to travel to with a nut allergy:

The prevalence of peanut allergies within Asia is found to be much lower than countries like the UK, for example with much speculation as to the reason for this. Some website claimed that because of the climate of tropical destinations such as Cambodia, the protein found within peanuts that results in allergy acquisition is broken down and thus rates are much lower, whilst others attribute this to their increased exposure to people at an early age. Owing to these stats, there was a general consensus amongst the online community that people are much less likely to understand what a peanut allergy was. It seemed important to be careful when reporting to restaurant staff as they may not comprehend what you mean, let alone prepare food in a way that would cater for your needs.

Another risk factor identified was the fact that peanut oil was used frequently to cook food within countries like Thailand, Vietnam and Cambodia. Often used in various dressings and sauces, I read warnings that even simple foods such as fries may be cooked in a way that could trigger an allergic reaction. Furthermore, further research seemed to detail that refined peanut oil is suitable for most peanut allergy sufferers, whilst the unrefined kind is more likely to cause reaction (informative, but not at all helpful since it is unlikely I’d be able to ask what type of oil they use in Cambodia’s native language Khmer!) 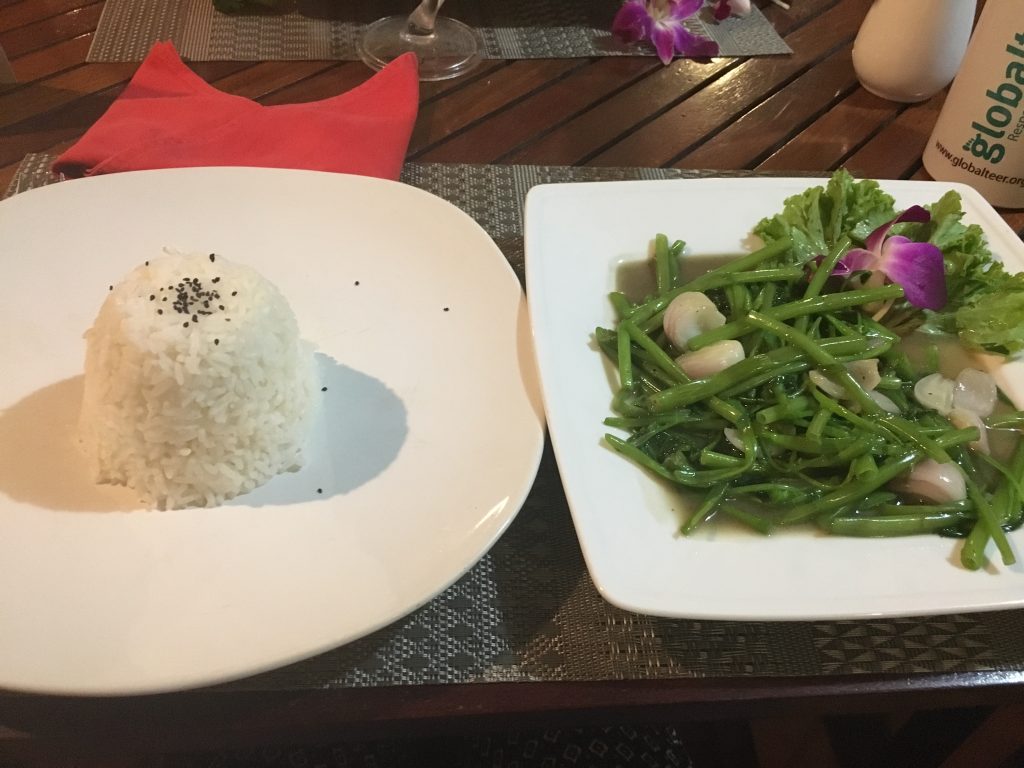 Essentially, this research made me incredibly nervous about both the journey to Cambodia and my 6 weeks spent in the country so I aimed to prepare myself as much as possible. I thought that I’d share my advice so that others don’t travel unprepared.

Contact the Airline: As I wasn’t the one who booked my flights to Cambodia, I had little knowledge of Cathay Pacific’s allergy policy and left it rather late to research (the day before, when they request 72 hours notice is NOT ideal.) Turns out I had to sign a form stating to bring my own food onto the flight since they could not guarantee any of their food was peanut free AND gave out peanuts as snacks on the flight. Personally, I think there are airlines with much better policies, since they refuse to make an announcement to other passengers like many others without a letter form a doctor. (I could have protected myself better if I had acted earlier.)

Research Local Dishes: I carried out rather extensive research into Cambodia’s local cuisine in the lead up to my trip as well as getting in contact with local eateries enquiring as to whether they could cater for nut allergy sufferers – this I think was an over-preparation, done more for my own peace of mind than anything else: whilst there I did not have a single problem.

Purchase Allergy Translation Cards: I ordered these from Allergy UK, something that also seemed rather excessive since they translated “If I eat peanuts, I will die” into Khmer. They were rather pricy, yet a useful safety net if it ever becomes difficult to communicate your allergy to restaurant staff.

Bring an Extra EpiPen: I went from often forgetting to take my Epipen anywhere in the UK to taking 10 with me for the trip just in case – this was really important as I may not have had access to one abroad I needed one. I also got a letter from the doctor stating why I was carrying them in case they were questioned at the airport.

Know your Allergy: This is the most important factor and something I definitely did not have covered before my trip – I had little clue about how severe my allergy was or what may trigger it (although having not had a reaction since aged 7 I had a pretty good idea it wasn’t too severe.) I was actually incredibly lucky that my allergy isn’t triggered by airborne particles as that would have been a problem on the plane.

Whilst I was extremely nervous towards the beginning of the 6 weeks, none of the problems I read about ever materialised and as the trip went on, I began to behave just as I did in the UK. In fact, it has made me wonder if all the negativity I found online was simply speculation and non-reputable – it was certainly outdated and perhaps stemmed from a fear of places far away, differences to the West and simply a fear of the unknown. The notion that allergy sufferers should abandon their trips abroad is one I definitely don’t agree with, yet I understand that there the severity of allergic conditions vary massively and preventative measures are hugely important.