The Natural Beauty of the Yucután Peninsula, Mexico. And a warning. 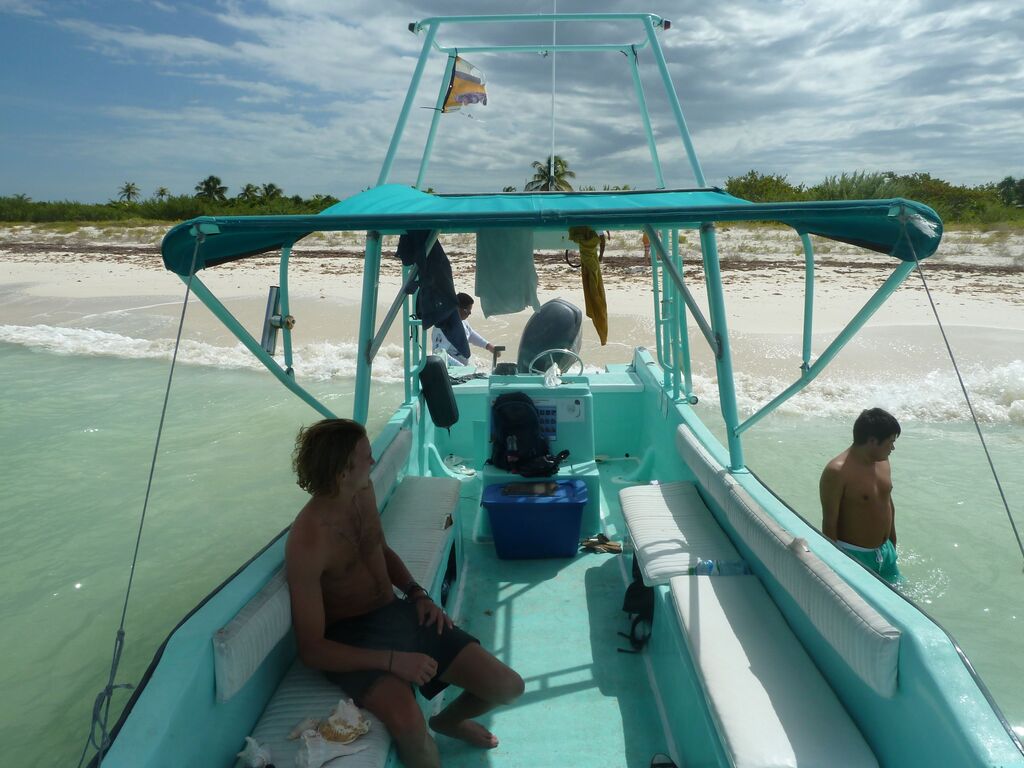 Our arrival at Isla Holbox.

One of the main attractions of Yucatán that persuaded me to book my flights there in the first place, aside from the culture, food, beer, people, and the weather, was the sheer natural splendour of the area.

And for me, the leading light in that environmental amphitheatre has to be the spectacular ‘cenotes’ – deep natural wells or sinkholes, formed by the collapse of surface limestone that exposes ground water underneath. Around 7,000 of them are dotted across the region.

One scorching Wednesday afternoon I was lucky enough to visit three of these natural wonders. This was an organised tour arranged by the locals of a town called Cuzama, where previous generations had constructed a primitive train track between the major sinkholes of the area. And in a strange twist, trundling along this train track were cars pulled, not by engines, but by horsepower. 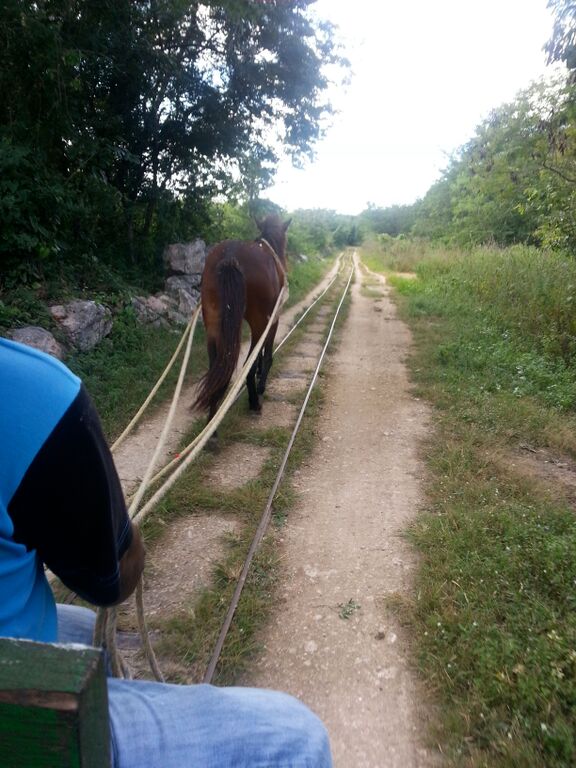 Our steed, en route to the cenotes.

Our first stop was more like a cave than a sinkhole, requiring the group to contort themselves this way and that and down a makeshift ladder into the darkness. Once the generator had sputtered into action though, the lights sparked on and illuminated a tall and narrow space with a natural pool at the bottom. It turned out, however, to be more than a pool. It was an abyss 28 metres deep filled with the clearest of clear water. It was certainly a very unnerving experience swimming in that…

The next two cenotes were shallower, more expansive and visible from above, at ground level. The first was clearly a gateway to an extensive network of underwater caves, with its nooks and crannies visible every place my eyes rested, but we were only to venture into the main atrium where the water reached a depth of around head height (me being a lofty 6 foot 4).

Finally, the last cenote that we visited was by far the most impressive. Overall, the underground space was about as large as a football field and as tall as a couple of double-decker buses, the water was a deep azure blue and unexpectedly warm, while the walls afforded many cliff-diving opportunities, and the roots belonging to the trees above cascaded through the entrance hole towards the life-giving liquid below. 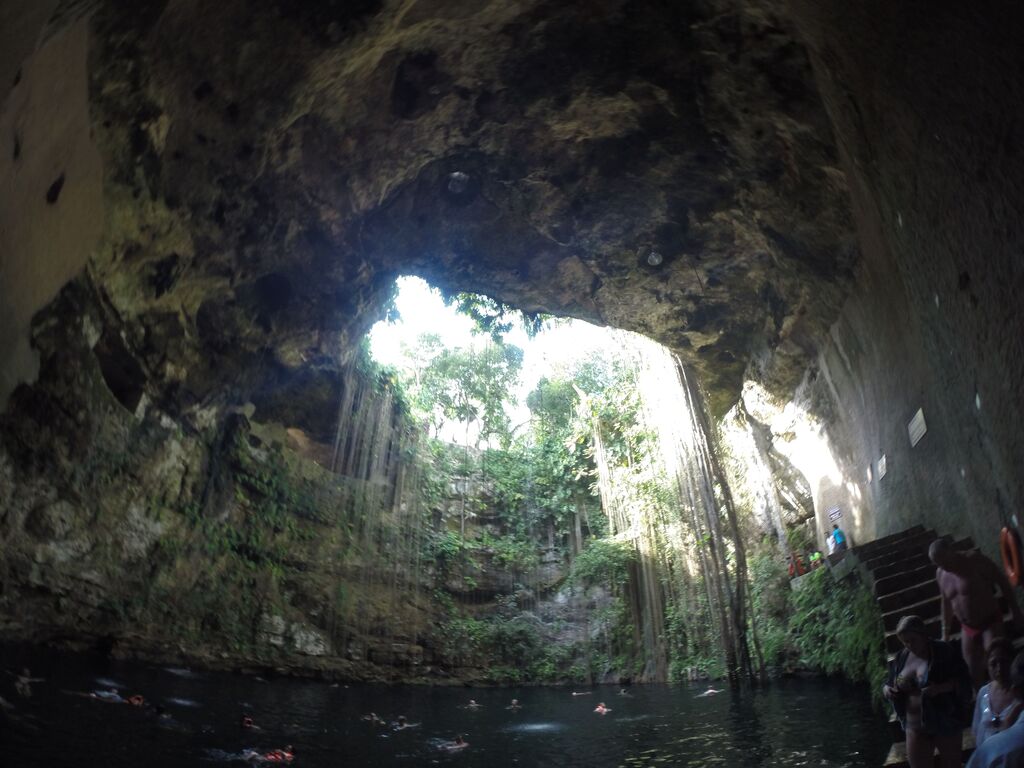 To swim in these underground Edens is an experience I would recommend without a flash of hesitation. I found it almost impossible to leave, and ended up delaying the rest of the group’s trip home on account of my stubbornness.

But giant limestone cathedrals and rolling jungle hills are not the only treats on offer in the Yucatán, as I was to discover on a jaunt over to Isla Holbox (Holbox island) the following weekend. Supposedly we were heading over there for a turtle conservation project, but it turned into one full day of riding a boat up and down the coast, collecting equipment from the beach, and two full days of relaxing on a beautiful island that has not had the misfortune to be ravaged by human activity. Yet. 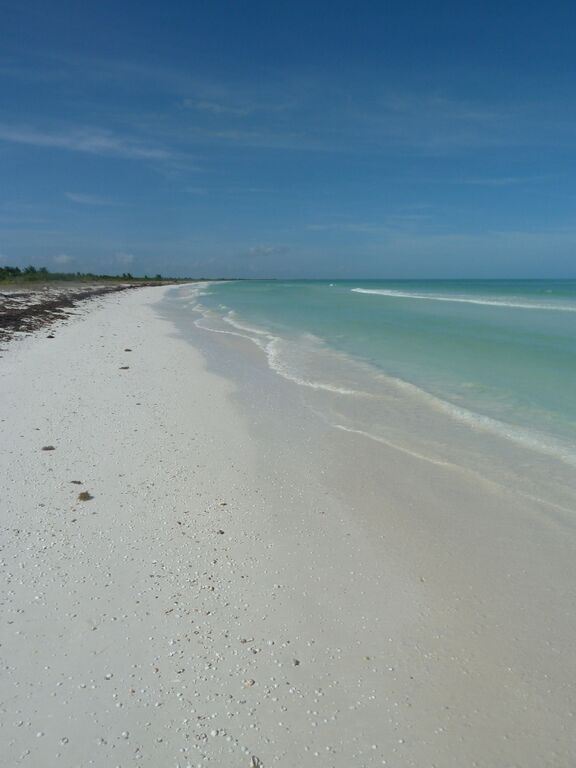 Isla Holbox is a small holiday island on the Caribbean coast that is popular amongst Mexicans, but doesn’t seem to be marked on the map of the millions of tourists that visit Mexico each year, many of them preferring the hedonistic destinations of Cancun and Isla Mujeres.

I do hesitate to wax so lyrical about this place, given that it is recommendations like this that create problems for these communities. But, as you will learn below, the wheels of doom are already in motion for this little island. And let’s face the facts here, it’s not like this article is going to be seen by thousands of people…

So, here goes. There are no roads on Isla Holbox. Only dirt tracks set out in a grid system that are fit solely for golf buggies. Buildings only stretch to a maximum of two or three stories and are decorated with ornate and colourful artwork. At 40×1.5 kilometres in total size, the ‘urbanised’ area takes up only a fraction of the space, while the rest of the island is either green or white; trees and sand respectively. The only access to the island is by passenger ferry and light aircraft. And most importantly, there are no heaving resorts hosting all-inclusive crowds, where adventure normally goes to die.

It is also one of the few places in the world that offers the opportunity to swim with the impressive whale shark (the largest fish in the world). I was unfortunately there at the wrong time of year to witness its majesty, but still managed to spot dolphins, flamingos and flocks of pelicans.

But, while we’re on the subject of the wildlife, nature is also the source of the only negative aspect of the island: mosquitoes (especially around the aptly named Mosquito Point). I am not exaggerating when I say that, come dusk, we were quite literally attacked by those blood-thieving insects. At one point, I stupidly stopped walking for five seconds, to take in the sunset, and there six of them descended to chow down contentedly on my ankle.

Accommodation is plentiful and there is good news for the budget traveller, as a couple of hostels exist for about 10 American bucks (around 7 British quid) a night. The people are lovely and there are some very charming and affordable little restaurants and shops dotted around. However, this will soon all be too good to be true.

Times, they are a-changing.

Word on the street is that a mega-rich business mogul in Mérida has covertly been buying up sections of land on the island. He now owns a pretty sizeable chunk of it and has just explained his intention to fill it with resorts, and build a road connection from the mainland. It goes without saying that these plans will open up the island to a multitude of sins, including environmental damage, wipe-out of the local culture, and economic changes that, suffice to say, do not suit the islanders.

Essentially this beautiful, wonderful, charming little island will go the same way as Cancún, one of the most claustrophobic, money-grabbing, vice-addled places in Mexico, if not the world. All in the name of lining some fat-cat’s pockets.

It has been quite the talking point over there.

Despite the fact that their lack of prudence was a factor in this tragedy, local residents are up in arms. They will not be going down without a fight, and will have many environmental and social organisations behind them. There is a slight problem however in the fact that most of the sellers have, errr, already gone and, ahem, spent their money.

Nevertheless, this is a great case study of one of the most pressing problems we face as humans: rapid urban development in the name of profit and the damage this inflicts on the environment that supports us.