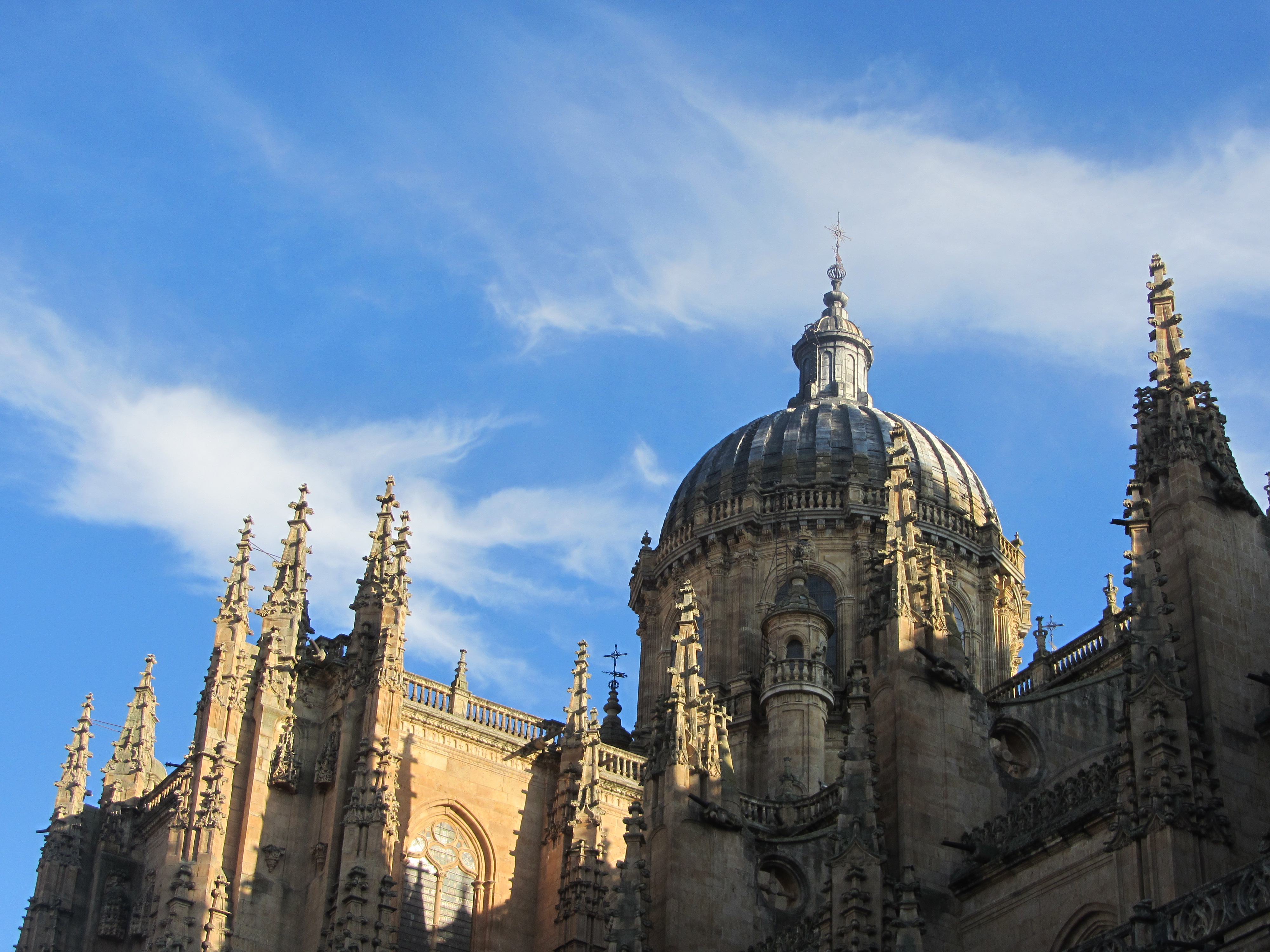 The ‘vast dome’ of Salamanca’s Old and New Cathedrals.

Imagine, if you would, the following scenario:

Three weeks before travelling to Spain. Two empty suitcases, their jaws gaping wide and empty, sitting on the floor of the conservatory, ready to be filled with clothes, books and other miscellaneous items. The only problem being that I owned (and still own) so many random items, each of which I at the time saw as essential to my travels in some way or another. What on earth to pack?! In the end, I wrote umpteen lists and eventually (I am still not entirely sure how) found room for everything.

The flight to Madrid was uneventful, until turbulence and suddenly dropping about five metres during our descent led me to strike up a conversation with the lovely French girl sitting next to me. We continued to chat through baggage collection, before I left to hunt for the bus station. Switching into Spanish mode, I asked my way around the airport until, right at the other end of the arrivals hall, I reached the buses. They would be that far away, wouldn’t they? About fifteen minutes passed, which saw a rather hot and sweaty queue of travellers sheltering in the shade of the bus from the intense heat of 34 degrees (there is nothing quite like Spanish heat). Settling into the comfy and spacious interior of the Avanzabus coach, I watched the parched yet beautiful Mediterranean landscape swish past outside the window – and even caught sight of a wind farm, which made me especially happy, being ecologically inclined in nature (no pun intended).

Two and a half hours later, the vast dome of the Catedral Vieja/Nueva of Salamanca appeared ahead of us as we entered the city. Now, I must confess that I cheated a little with improving my orientation skills, and took a cheeky taxi to the hostel in which I would be staying for a while, the Residencia Salamanca Dorada. However, I did have a good old chat in Spanish with the taxi driver about the city and what he, as an insider, would recommend visiting (of course I had done some research before coming, as there is a truly incredible wealth of information on any World Heritage Site online – it seems to come with the title and the honour). 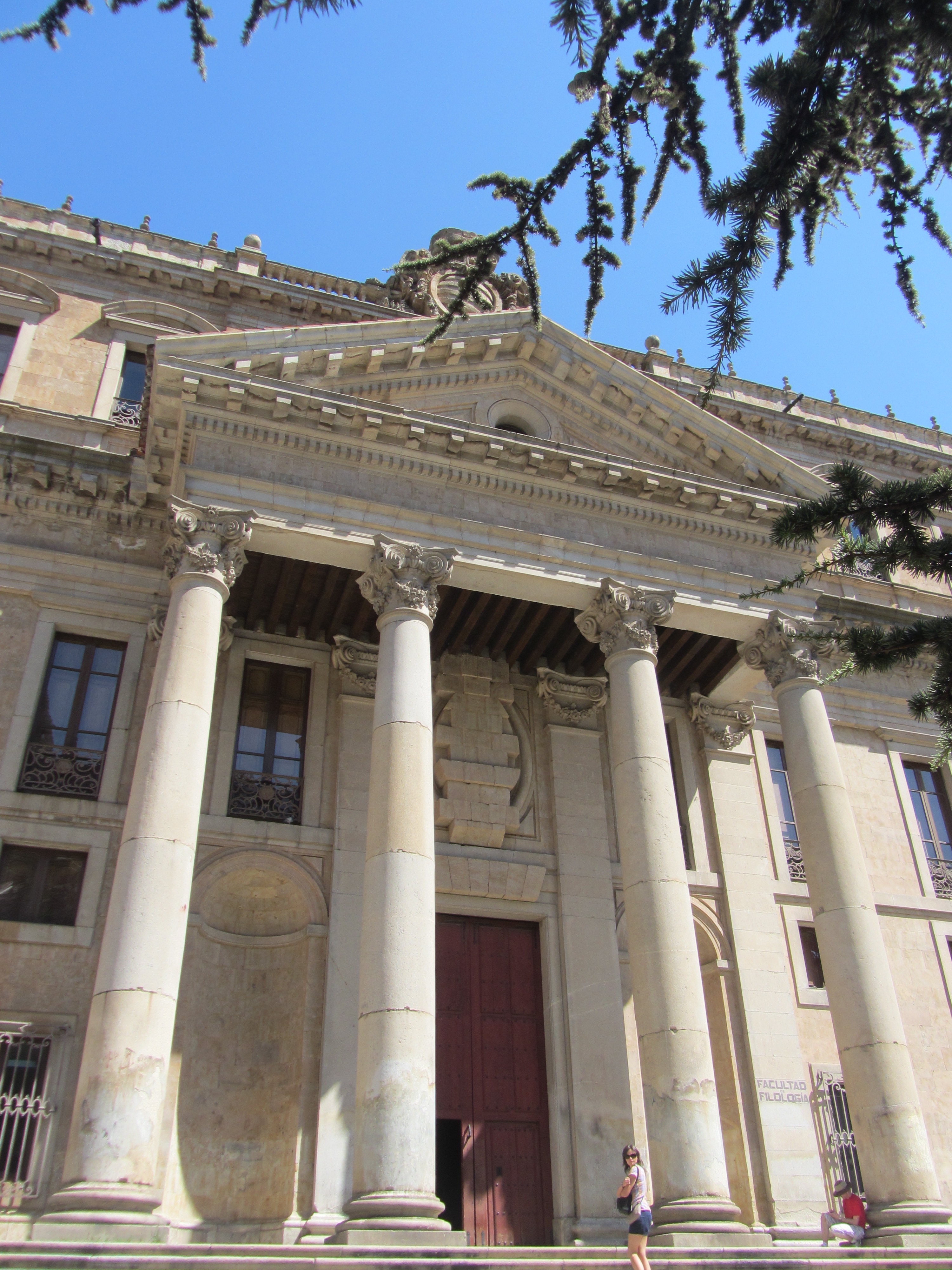 Having arrived at my destination, I paid the driver, buzzed the hostel intercom, took the lift to the fourth floor and was shown to my room by Carmen, the friendly hostel owner. It was quite a minute room, and I enjoyed a wonderful view onto a tiny courtyard (I could just about see the sky if I craned my neck), but it was comfortable, clean and I had the luxury of a little shared kitchen just next door. The only catch was that there was an unopened tub of mint chocolate chip ice cream in the freezer and I didn’t know who it belonged to…but I really really REALLY wanted to open it!

On Wednesday, I woke at a time which could, amongst the Spanish, with their fiestas through the night, only be described as ‘bright and early’ – 9:30am. Over breakfast, I joined Manu (one of the hostel staff) in the kitchen, our conversation ending with her refusing point blank to let me wash up my bowl, bless her.

Now, I have probably ranted to most of my friends and family about the trouble I had completing all the necessary Year Abroad paperwork (I could never work as a bureaucrat!). You, lucky reader, escaped the torture of my complaints. Luckily, I had sorted the accommodation issue just before arriving in Spain and had managed to secure myself a place in the Colegio Mayor Hernán Cortés college (yes…I wasn’t too sure about its namesake either!), but one form remained to be signed. So, off I went, following directions gleaned from Google Maps, through beautiful sandstone (geologists will roll their eyes at that horrifically generalised term) buildings, finally emerging onto the Plaza Mayor, the Trafalgar Square of Salamanca. Here, I had to stop for a minute or two, turning with my mouth open in amazement, gazing at the traditional Spanish Baroque façade of the clock tower and bustle of people milling around. It is a smaller version of the main square in Madrid, except that I don’t think it needed to burn down several times for the king to see that rebuilding it in stone, instead of wood, would be a good idea. Yes, that happened in Spain’s capital. Interesting fact: until the mid-19th century, Salamanca’s Plaza Mayor was used for bullfighting. 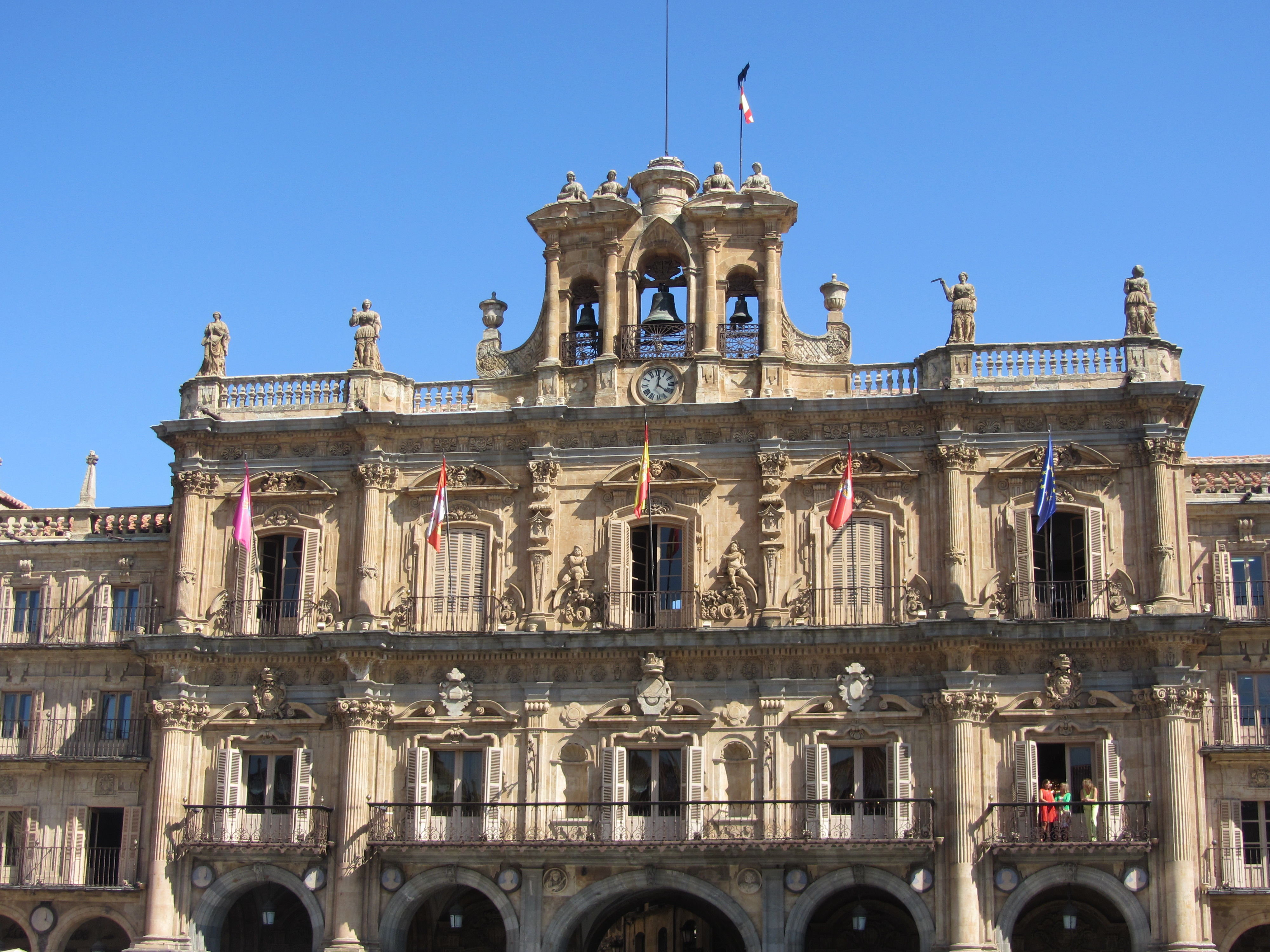 Salamanca’s Plaza de Armas: an impressive site for a bullfight.

The language faculty building (or Facultad de Filología), situated on the Plaza de Anaya square, was an impressive, mighty pillared piece of architecture, and walking in through the great wooden doors reminded me of entering the British Museum. On the topmost floor, which boasted gorgeous views over the city, I found my International Area Coordinator, who signed off my form and answered each and every one of my questions. I am still so grateful to her, she was such a great help!

Form in hand, I decided to pay the Cathedral a visit. The best word to describe said cathedral is: breathtaking. Clichéd, yet true. It is absolutely incredible! If ever you are in Salamanca, please please go, you will definitely not regret it! Looming up from the square in a mixture of Gothic and Romanesque architecture, its facade is so intricate that you almost can’t believe that someone could carve something so complex out of stone. As a student, I received a ticket and audio guide for only €4 – more than worth it for the two hours I then proceeded to spend inside, inspecting all the little side chapels and the old and new parts of the cathedral, decorated in bright gold and vibrant hues of scarlet, sapphire and emerald. I especially enjoyed the fine view up to the central dome, and organs in the choir stalls. They are placed opposite each other – one old, the other new, fashioned by the royal organ builder –allowing them to engage in a call-and- answer song during mass. The audio guide cheerfully babbled away, the recorded voice completely ignoring the fact that I wasn’t catching every word. However, I got the gist and it was the visual impact that was most important on that first visit. 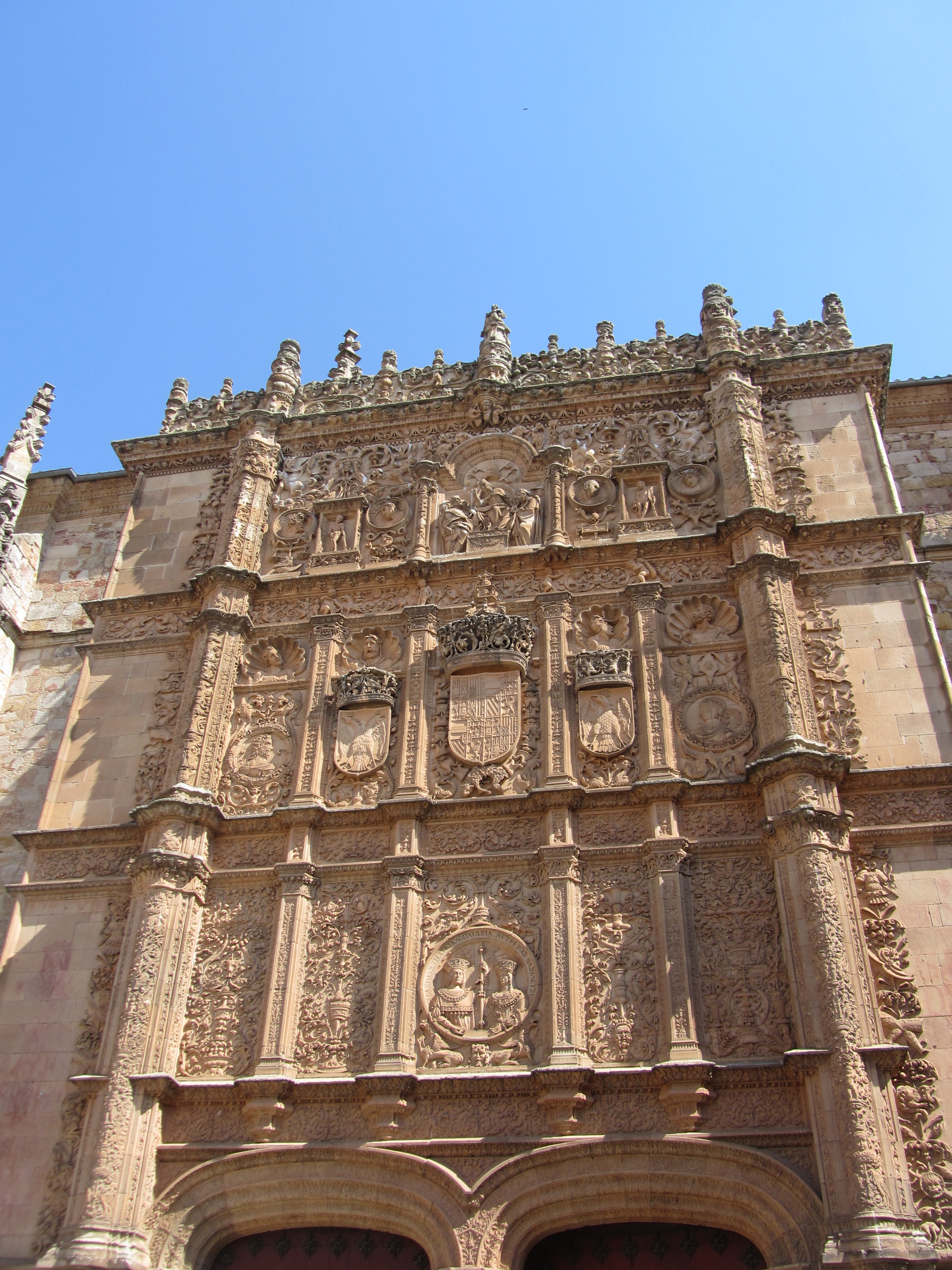 Can you spot the frog?

On my way back to the hostel and on a quest to find the International Office, I came across the old university building. This again had an intricately carved façade, so I stopped to examine it. Eavesdropping on a German guided tour, I was informed that, somewhere on said façade, there was to be found a little frog (or ‘rana’), 8cm in size, of which it is said that, if a student finds it without help, it will bring them luck in their exams. I am not entirely sure what this experience will mean for my exams, because I only found it with the tour guide’s help.

Once back at the hostel, with the heat slowly fading into the night, I fell onto my teeny-tiny bed in my teeny-tiny room, and was asleep before you could say ‘paperwork’…