Jonathan Theuring in Travel on 30 September, 2015. 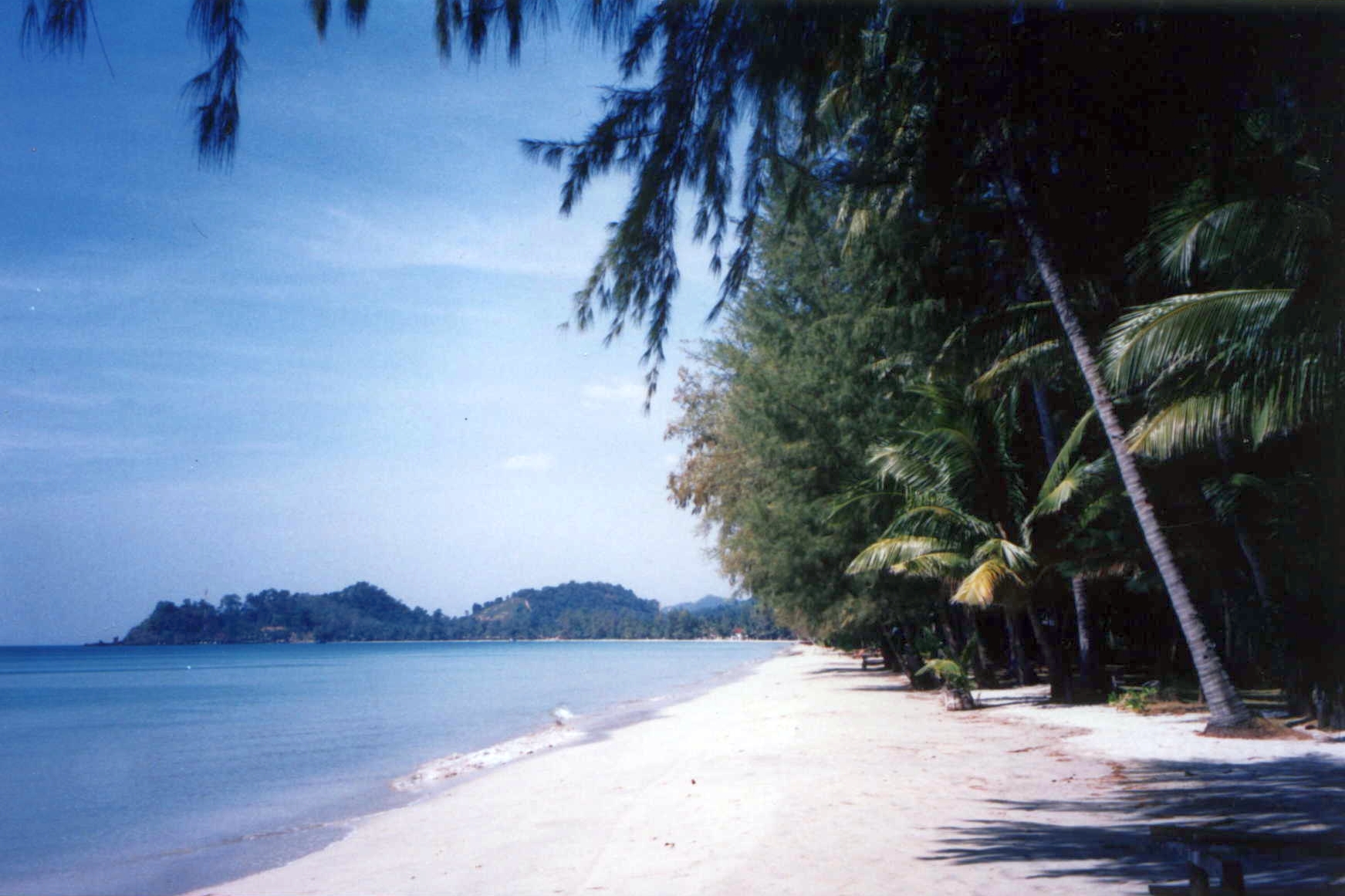 Three miles out from the Thai coast just west of the Cambodian border lies Koh Chang, an island of singular natural beauty that houses an expansive national park, complete with elephant sanctuaries. The luscious park covers most of the land and is embroidered with dazzling waterfalls.

Seen from above, the shape of Koh Chang’s headland is said to resemble that of the peaceful, large-eared creatures which inhabit its forests (hence its name, which translates literally as ‘elephant island’). As we found out during our visit, trekking on elephant-back through the jungle several metres above the undergrowth provides an unparalleled view of the unique fauna and flora of the island. 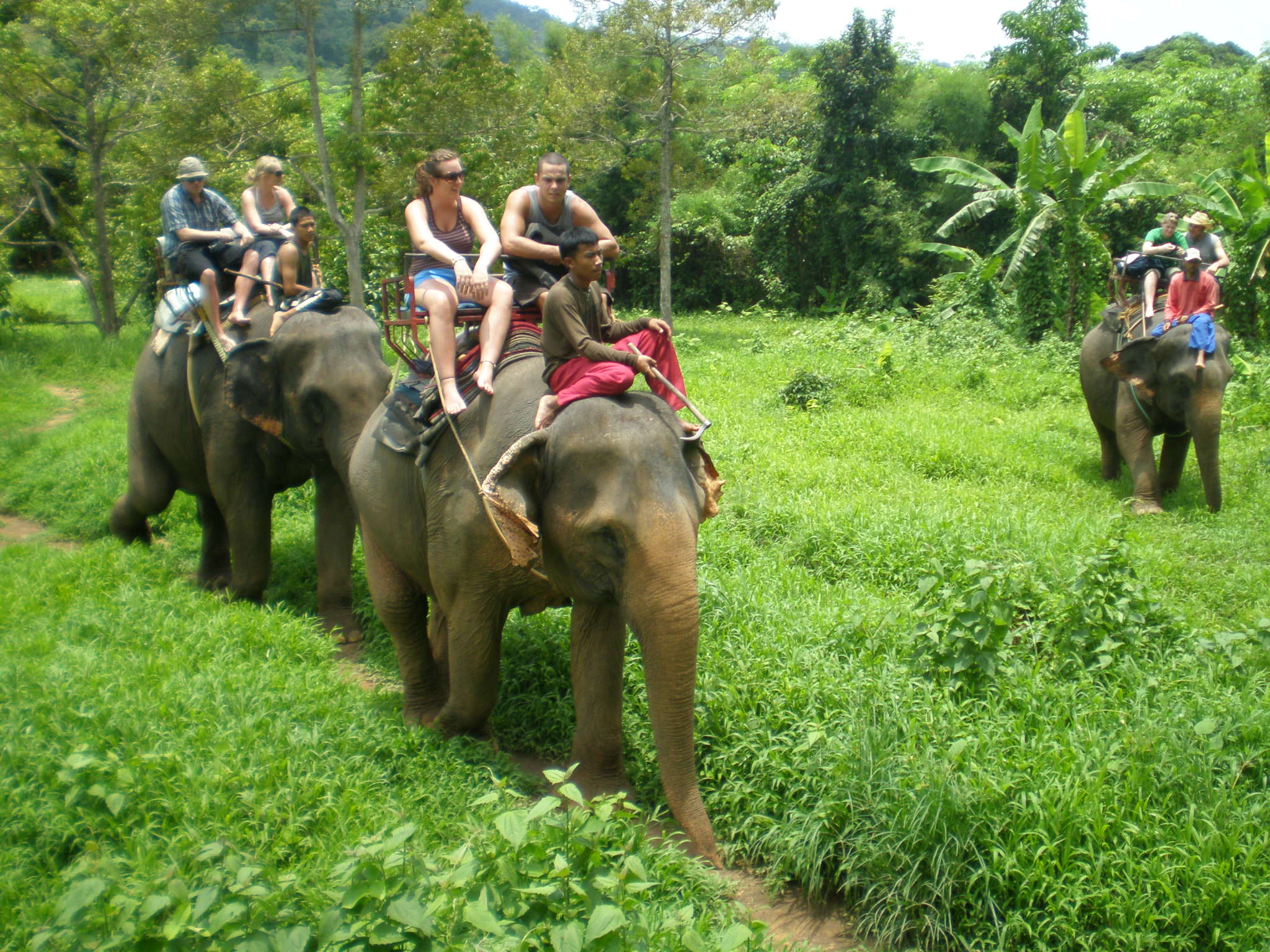 Our voyage by sea from the mainland province of Trat was eventful to say the least. The tiny antique ferry we had boarded seemed only just capable of keeping astride of the large waves we encountered, which continually buffeted the ship, tossing its passengers mercilessly from side to side throughout the journey. Rain, propelled by nigh horizontal winds, drenched us through the open portholes on either side of the vessel. This harsh journey, though, was well worth it in the end.

We found lodgings in an area of Koh Chang principally populated by travellers and European holidaymakers, known to them as “Lonely Beach”; an ironic name coined because of its reputation as the centre of social life on the island, which elsewhere remains secluded and left untouched by tourists. 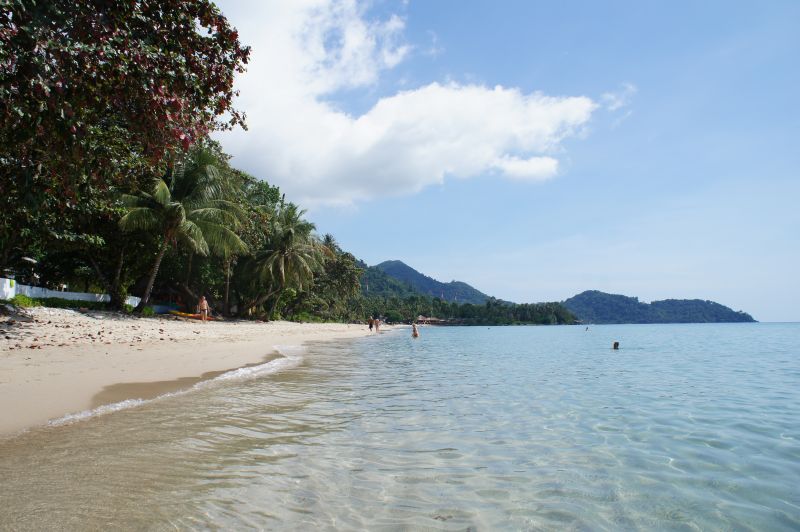 In an effort to meet the ever-increasing demand for hotels and other touristic infrastructure, Lonely Beach was undergoing drastic redevelopments during our stay. Our home for the week – the paradoxically dubbed ‘Exotic Bungalows’ – was as its name suggests: half building-site, half paradise.

Having booked the accommodation online on my phone that same day, a dangerous game to play when travelling, we had no idea what to expect. I joked as the minibus driver pulled up outside a construction site that we would be staying there for the night, only to discover that it was indeed our hotel amidst renovation works.

Although our room was positioned just behind the building works at the hotel front, it was concealed up in the trees, raised above ground in what felt like the heart of the jungle amongst a dense mass of tropical vegetation, surrounded by the sounds of exotic birds and other animals scampering about across the bungalow roof.

We had chosen to visit Thailand during low season, arriving to what seemed like a ghost town. On our first night we made it to an open mic reggae-themed night at Ting Tong Bar, a laid-back ex-hippies’ retreat with some serious feng shui. We sat apprehensively through the first act waiting for others to arrive, and then as it got dark groups of travellers emerged and began to congregate around the singer. All were seated on decorative cushions at ground-level tables, each individually lit by candlelight. 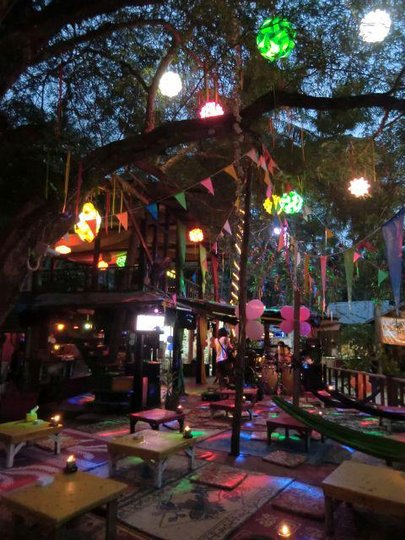 Early in the evening the barman’s range of wares was limited to the kind of beverages you would find being consumed in any Western club: the few people that had arrived early sat around drinking beers or cocktails and helping themselves to food from the pop-up BBQ. Yet as people arrived, a sign was placed on the bar that read, ‘Shroom Shakes only 500 baht’ (~£10). We looked at each other thinking that perhaps it was a joke, but the pupils of a number of the revelers (including a few of the bar staff) became severely dilated soon after and the truth became clear.

As an aside, it was my impression that Thailand as a whole has a very warped policy on recreational drugs; all kinds of drugs were on sale in many of the venues we visited throughout the country, and yet possession of these drugs carries a severe penalty – in neighbouring Malaysia, capital punishment is still enforced for crimes relating to drugs like marijuana.

My moral qualms notwithstanding, all of the bars around Lonely Beach share Ting Tong’s vibrant and laidback atmosphere. What’s more, despite its remote location, the area manages to cater for an eclectic taste in music and nightlife, even more so during the busier months. The focal point of the area, of course, is the beach itself: a vast stretch of white sand dunes that reaches out to the horizon bordering the clear blue waters. There is plenty of deluxe accommodation available right by the sea, though you would struggle to find a deal there quite so affordable as Exotic Bungalows.

Hidden far away from the mainstream tourist routes, Koh Chang offers the perfect relaxing getaway for travellers in the South East Asia area, yet the tranquil island can easily be reached from main cities both in Thailand itself and in Cambodia via coach and ferry for a very reasonable fee. The people of Koh Chang, too, enhance its laid-back atmosphere and are noticeably more amicable than the some of the less-than-friendly tourist-targetting scam-artists we encountered in cities like Bangkok and Pattaya. Of the many places we visited across the country, I would certainly recommend Koh Chang above the rest.

Photos courtesy of the author.