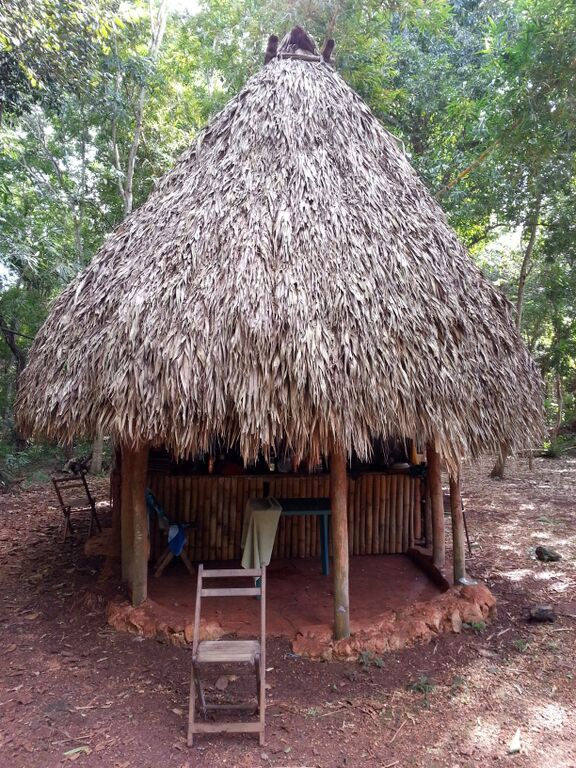 Our house, complete with reading chair.

Right, back to the farm. At the end of our working day, when our Mayan friends trundled off on their motorbikes, the two of us were essentially left to our own devices for the evening. With no running water or electricity, this meant showering with the help of a bucket and having everything ready for bed before sundown. Because it would suddenly get dark. Very dark. So dark you wouldn’t see your finger touching your eye.

I admittedly found this to be an issue. As the light faded, the insecurities of being stuck in the middle of nowhere strengthened. Fireflies performed in the dusk, blinking in the bushes like the eyes of a predatory puma or hungry jaguar. The noise of the jungle rose to a crescendo, exacerbated by the crashing thunder, flashing lightning and slashing rain that lasted through the night. The burden of a lack of phone signal weighed heavily on my mind.

Aside from reading under torchlight, all we could do after our surprisingly civilised dinners with our host – spent chowing down on vegetables and rice, and mulling over such enriching topics as Geography, conspiracy theories and Mexican/Mayan history – was retire to our hammocks and seek our 40 winks. But on the final night in particular, sleep was at an absolute premium. Resting in harmony in a hammock is a lot more difficult than it looks, but this only formed a fraction of my problems. 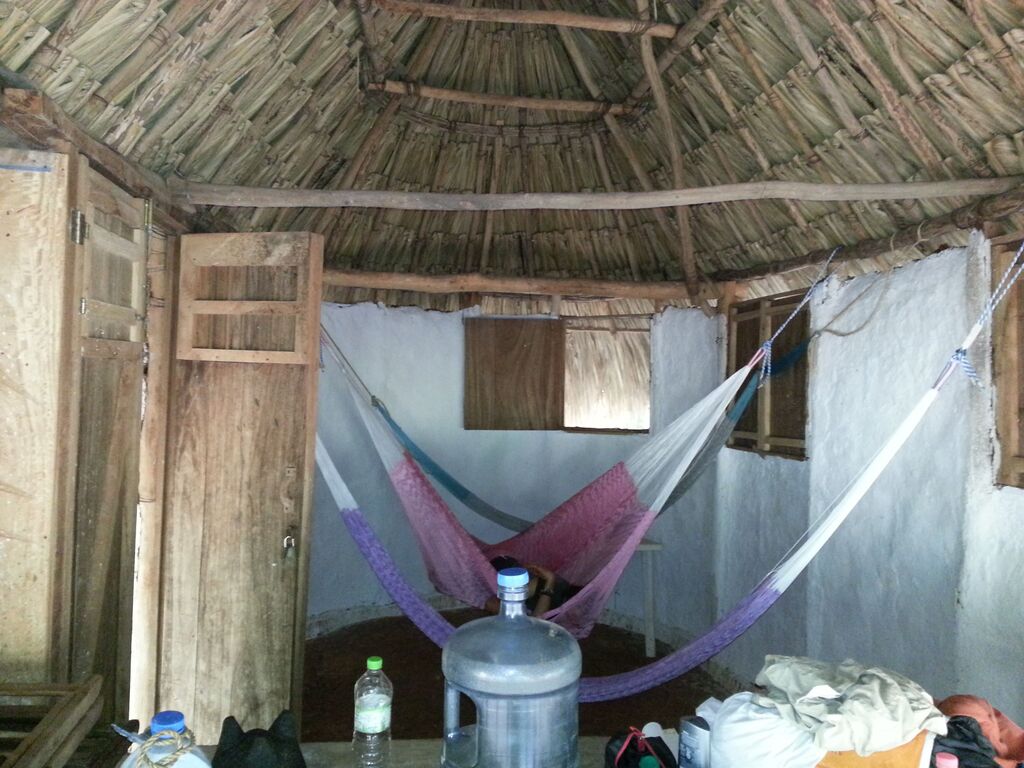 Our living quarters for three days.

Earlier in the day, Herr G. had kindly explained to us that the reason we slept in hammocks was to keep a safe distance from the creepy crawlies on the floor. That’s all well and good; it’s common sense really. But then he went on. The only possible thing that could happen was a friendly drop-in from the scorpions living in the roof above. Apparently, they are quite partial to a few night-time rounds of Queensbury rules in the rafters, and sometimes they knock each other off, and sometimes they end up in your hammock, and sometimes they sting. Buuuut, he said, they’re big and black so they won’t do you any harm (unlike boxers—the bigger the better with scorpions). The worst that happens is a numbing of your mouth – no chance of death. It’s like going to the dentist, apparently.

In fact, he regaled us with tales of the TWO times it had happened to him before. Nothing serious, he said, just a little sting. He joked with a toothy grin on his face. So he’d rather that than go to the dentist? HAHAHAHA. I don’t know what Mexican dentists are like, but frankly I would take Dr. Shah at Brighty Whitey’s NHS certified dentists in Rickmansworth every time.

Our host’s stories obviously didn’t do much to calm me down because I immediately had a look around our rafters. For my sanity and my sleep deprivation, this turned out to be a BIG MISTAKE. I counted no less than five scorpions. 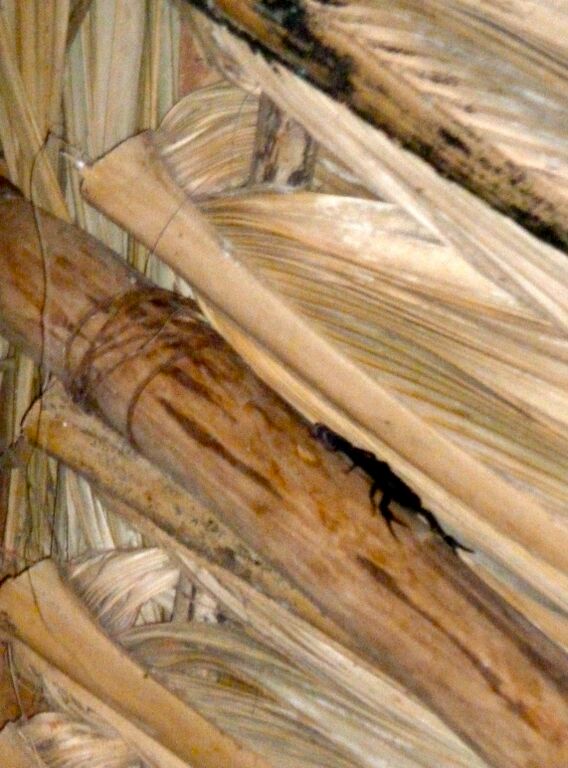 An unexpected guest in the lodge.

My morbid curiosity was then of course at an all time high, so I extended my search area around our dwelling when darkness fell, and my torchlight fell on such wonderful sights as spiders the size of my fist on the walls and a cute little tarantula living below our front step, exactly where, the night before, I had blissfully and ignorantly released some liquid gold in bare feet.

So, as you can imagine, I slept for approximately zero hours that night. But, in the morning, I opened my eyes to a heart-warming sight – the farm dog was sleeping outside, almost as though standing guard at the door. Mind you, that was after she had eaten our dinner and brushed against me in the pitch black leading to paralysing panic. So she had some making up to do. 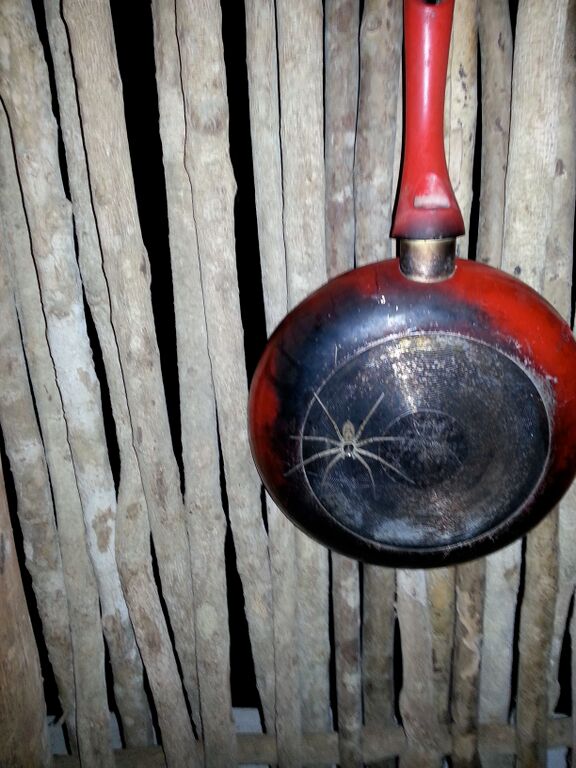 Anyhow, enough about my cowardly monkeyshines. Let’s get back to the bigger picture. Mr G. has some grand plans for his little slice of the Yucutan. Of course, he wants to complete his Mayan village and continue developing his ground-breaking farm work. These two combined would see a return to the triumphant days of the Mayan people with the full reconstruction of not only the look and feel of a complete village, but also a recreation of the day-to-day life we would be privy to with a trip back in time.

But in addition to this, he eventually wants to spread the word of the Mayan way of life by opening his land to more volunteers as well as the paying public in the form of an eco-lodge (the volunteers, in fact, are currently travelling down there in their droves to help him with his quest – so you can call me a bit of a pioneer if you really want to). Thankfully he is upgrading the lodgings, which might make it a little harder for the local wildlife to cuddle up with their human guests.

At the end of the fourth day, our time at the farm was up and we began a long and winding journey back to Merida. This journey consisted of the following: Three of us (including one of the Mayan lads), heavily laden with bags, speeding along country roads on a motorbike, then a taxi, then the coldest bus ride ever, then a mini-bus ride, and finally a walk back to the volunteer house in the city. All of it a great big laugh. 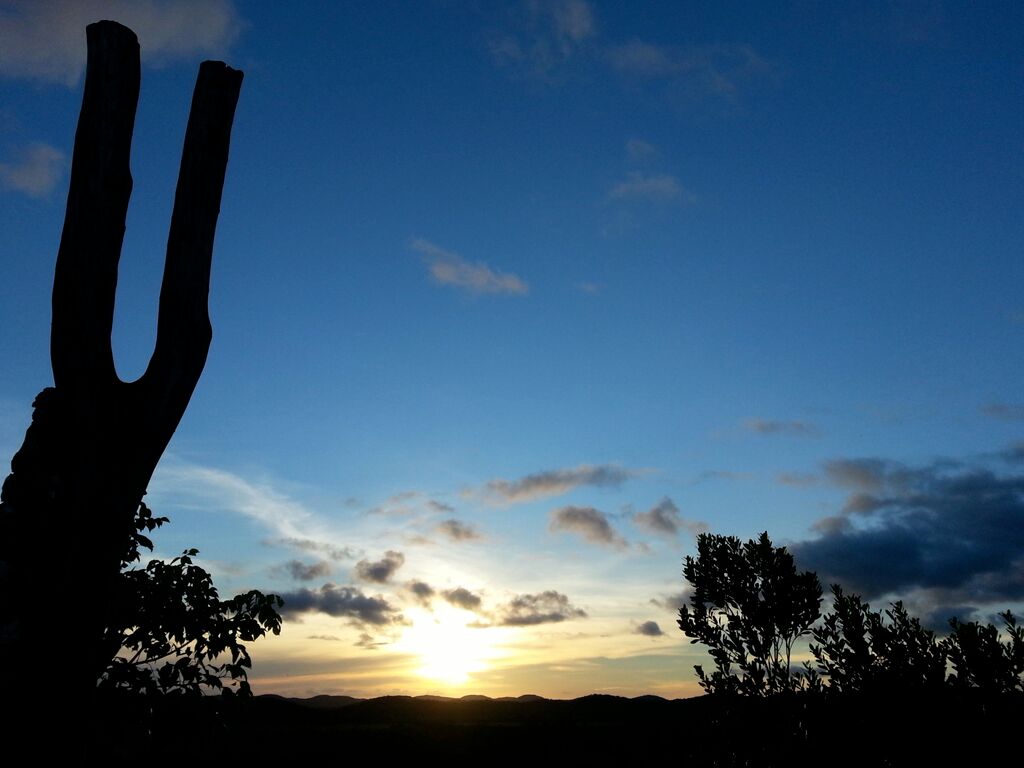 One of the reasons this whole thing was worth it.

We were back, and at last, back in the relative comfort of my springy bed, I could reflect on the last few days with clarity, and I came to the conclusion that what I had just done was a fantastic and fascinating, yet challenging, thing. If you were to ask me if I would recommend it… yes, I would. But if you were to ask me if I would do it again? Then I would reply in the negative. It’s a once in a lifetime opportunity (if you catch my drift) and I’m too much of a fan of beds and a sealed roof to go back again any time soon.

I do not know how Herr. G does it. But then again this is someone who told us, very nonchalantly, about this one time he got lost in the jungle with no food, water, communication, or directions for two nights and actually enjoyed it.