Oxkutzcab and the Mayan Farm (Part One) 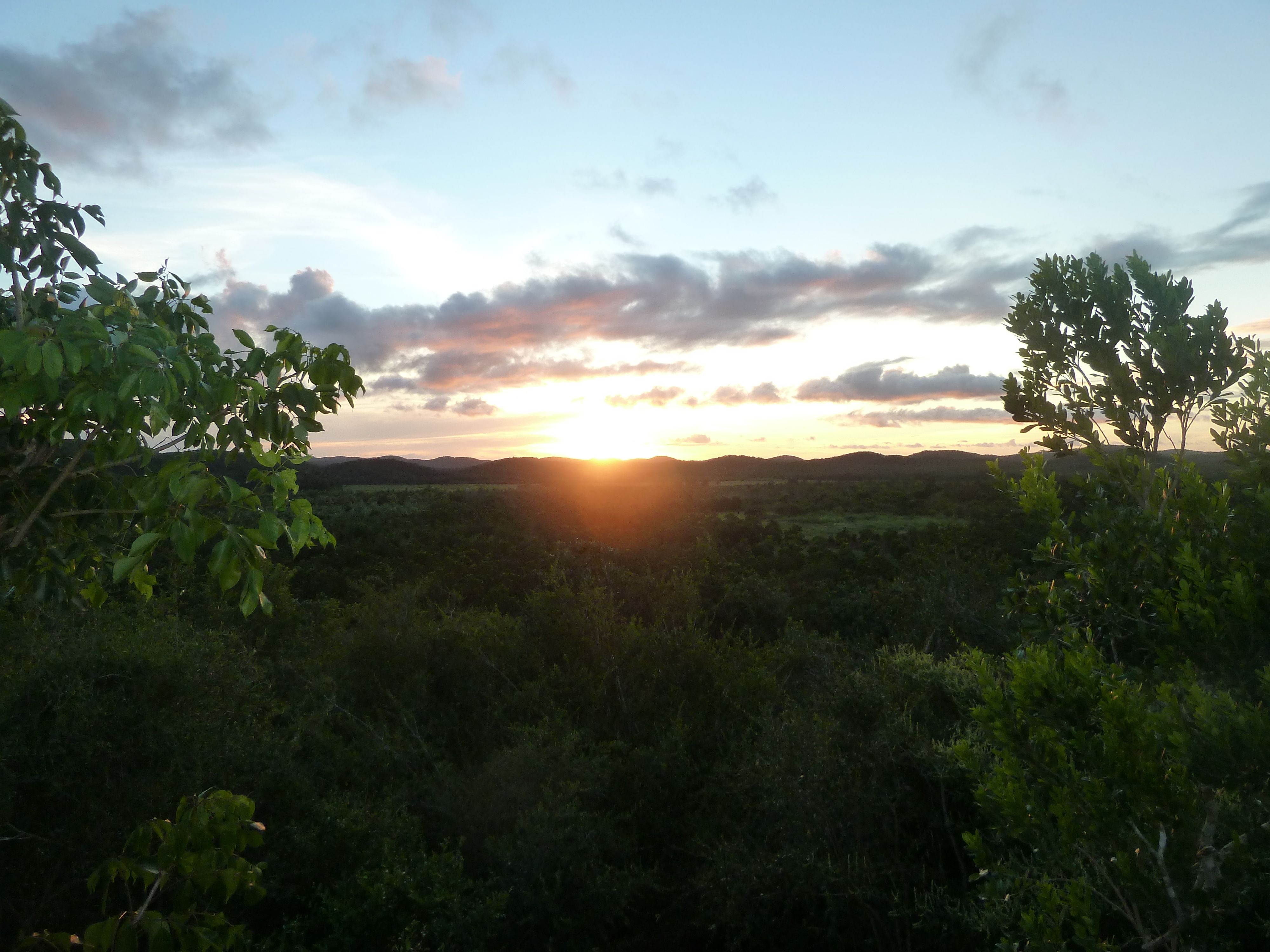 Sunset over the jungle.

Upon arrival into Oxkutzcab, and equipped with bundles of hammocks and supplies, my fellow volunteer and I nervously waited for the mysterious farm-owner who would be playing our host over the next few days. All we knew was that he was a he, and not from around here. Somewhat limited information you might think. But actually, this information was invaluable in a town like Oxkutzcab, given its complete lack of ethnic diversity – Mayan Mexicans as far as the eye could see.

After a little while soaking up the curious glares from these locals, and once we’d answered our hunger calls with some delicious back-street lunch, the whitest and tallest guy in town floated around the corner. After the initial I-recognise-you-but-don’t-recognise-you eye contact we all know, he approached casually and spoke to us in perfect English (reassuring considering our initial impression that we would be in linguistic darkness during our time there) and invited us into his car for the twenty-minute drive to his farm. On the way, we were treated to his also perfect Spanish, as well as the fascinating story of how he ended up in the middle of nowhere. It turns out he is quite a guy. His tale began on an isolated farm in the Black Forest, Germany, where he nurtured a fascination of sustainable farming techniques and the Mayan culture, the latter of which led him to the Yucatan Province, Mexico, as part of a syndicate with a mission to help revive the Mayan culture. 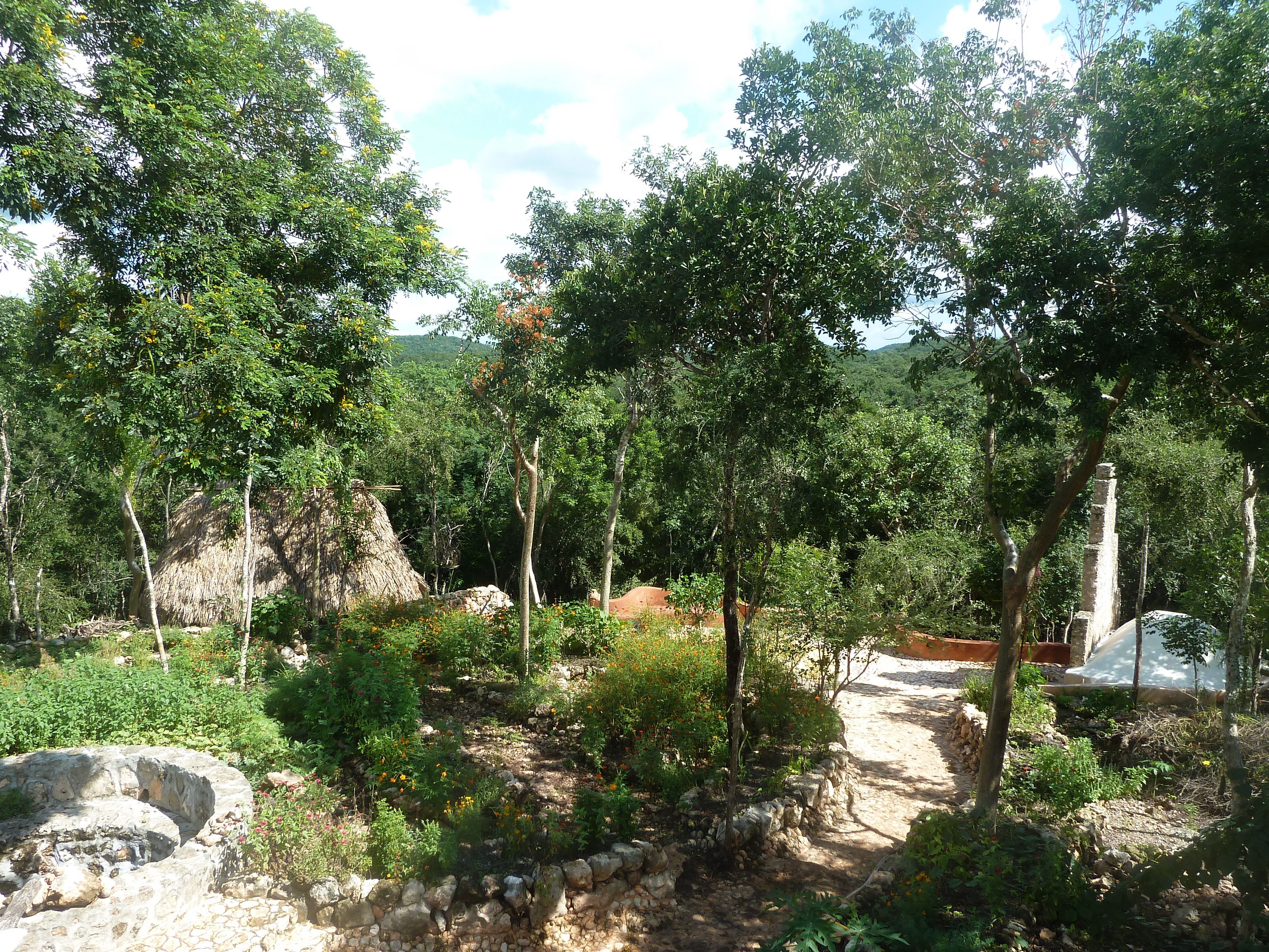 A view over the restored Mayan village.

Our host, let’s call him Herr G, started his farm in a region where it was widely and popularly believed that nothing beneficial would grow, let alone be cultivated. Only weeds and pests. But, with the help of self-built irrigation channels and a special concoction of micro-organisms, today he grows a huge range of trees, plants, fruits and vegetables – all within his very own, self-sustainable, and environmentally friendly plot of land.

One of his main aims has been to repopulate the region with the mighty mahogany tree; a species that once ruled the peninsular prior to its obliteration by the colonising Spanish (a common theme here, right?). He is also restoring a Mayan village, with painstaking and remarkably accurate detail, complete with a cathedral, water well and traditional sweat-lodge. A completed tower that also sits atop his hill is in fact the highest building in the Yucatan and affords an unbelievable view over the pure vegetative green of the rolling jungle and a spectacular sunset in the evening. Our man is even restoring a Mayan-made natural water filtration system between two dried-up lakes that he himself has discovered. 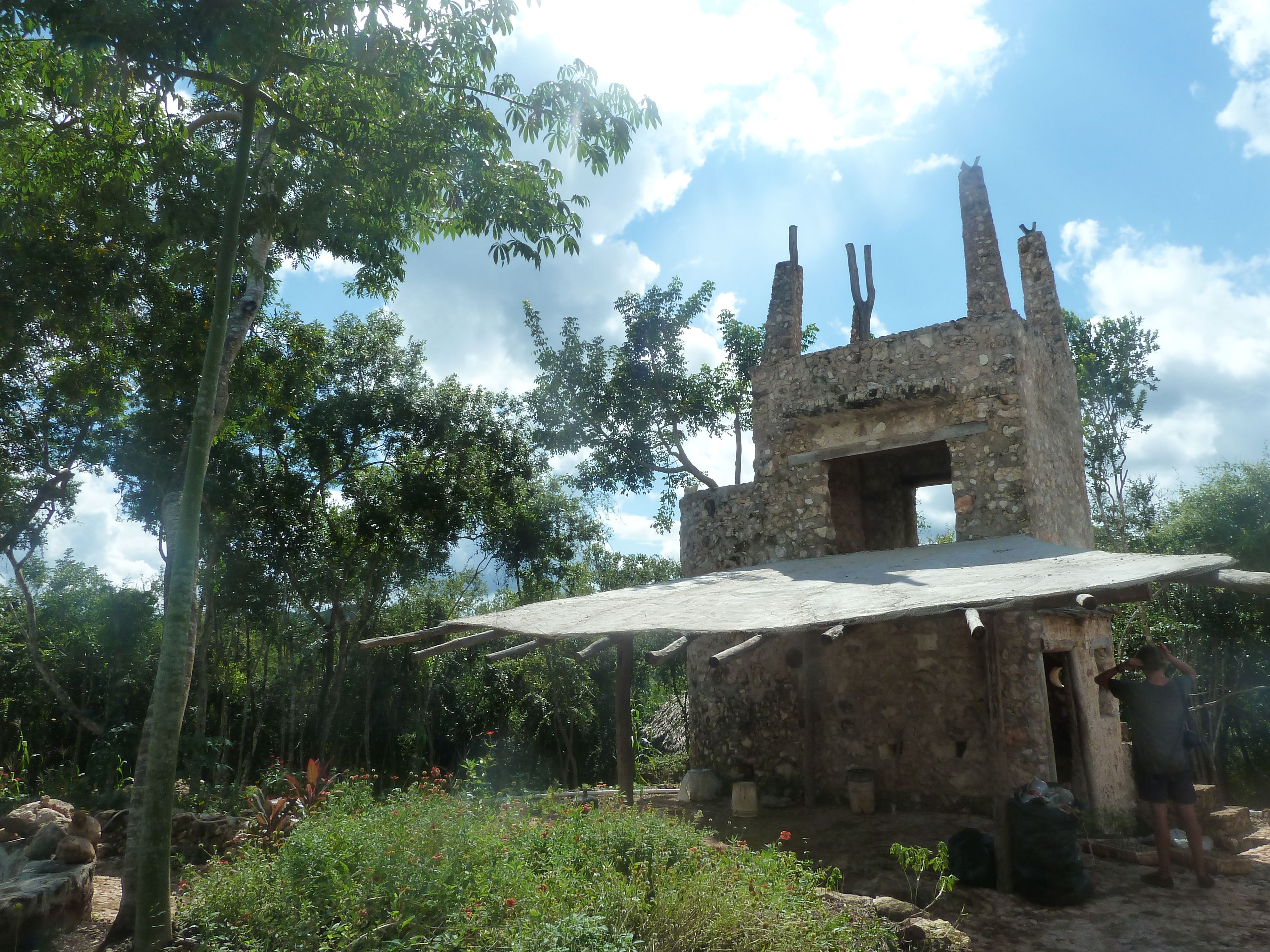 The highest building in the Yucatan.

All of this he does whilst living on the farm itself, in self-built quarters with only a solar panel to power his laptop (for business purposes – not so he can Instagram his ventures), eating only self-cultivated food, drinking water that he purifies from his well, walking without the assistance of shoes (there are snakes, tarantulas, scorpions and ants hanging around), and enjoying the company of only his Mayan-descendant workers during the day. And what a merry band of workers they were…

The fact that none of them possessed an ounce of English made things a little bit interesting. Sorry, I should rephrase that and say that I in fact possessed very little Spanish (after all, they were already bi-lingual, with Mayan and Spanish under their belts), but all the same, things were interesting.

The guys directed me to work using that globally established system of ‘pointing and speaking loudly and slowly’ in single syllable Spanish. My tasks ended up mainly consisting of manual labour, not entirely different to what I was used to in the UK, albeit an order of magnitude tougher given the low wheelbarrow and glove availability, and intense heat of course. The steps up to the tower had been washed away after a rainstorm (which still seemed to rage during the nights we were there) and it was our job to fix them. The stones for each step came from the surrounding limestone bedrock and the supporting soil from the hill itself – all very above board. 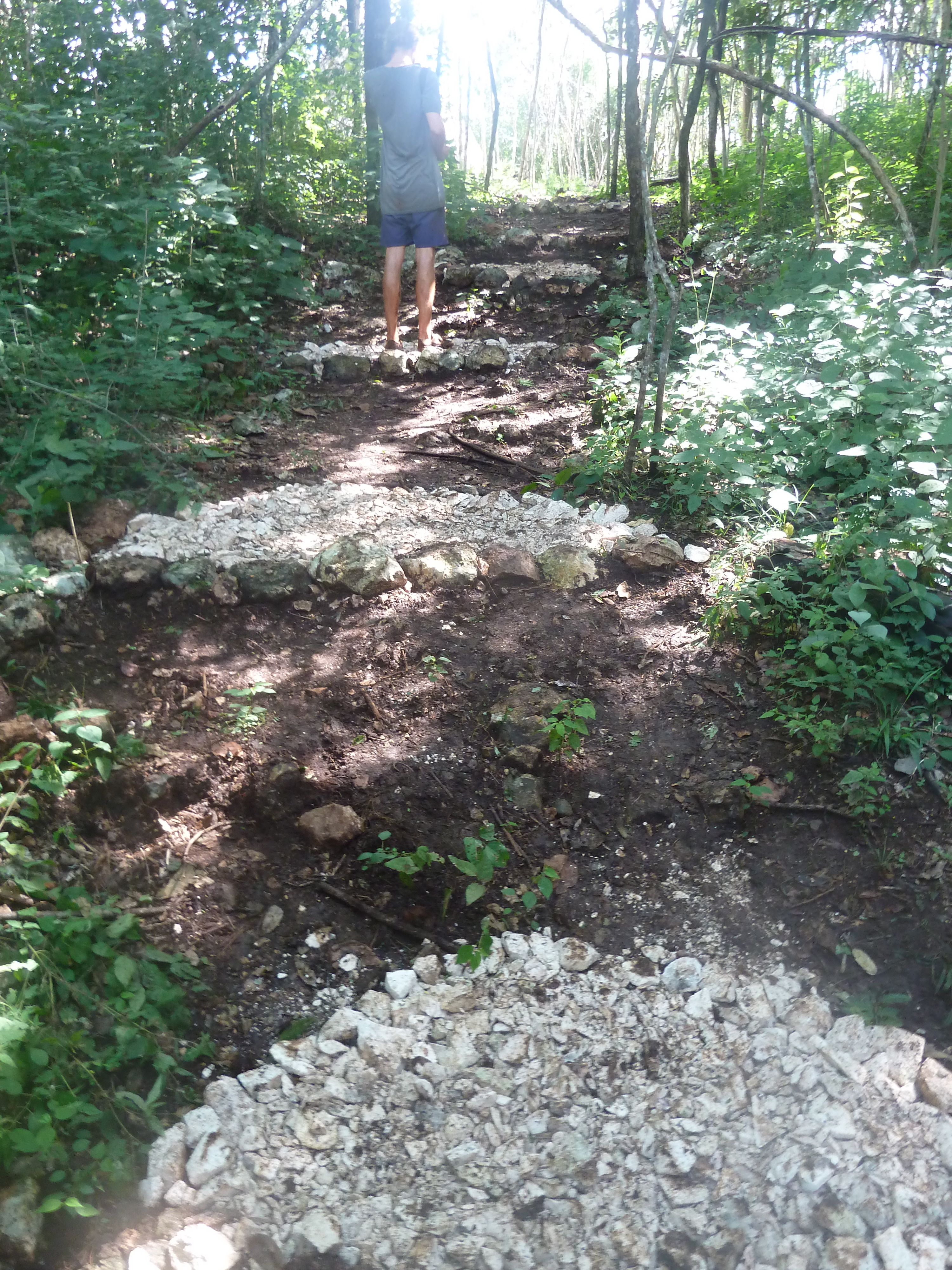 It was hard going, but at least I wasn’t being bitten to shreds by a carpet of angry red ants protecting the tangerine trees; this was the experience of my fellow volunteer on the other side of the farm, who had the unenviable task of picking said tangerines and avoiding said ants.

As for my fellow workers, I was surprised at first to find that they seemed to adhere to the Top Gear-propagated stereotype that Mexicans are a tad on the lazy side. I desperately wanted to prove Clarkson, Hammond and May wrong, but in the beginning I was sorely disappointed. Work began slowly at around 7am, and finished at 2pm. A pretty short day in the grand scheme of things. Especially if you consider the number of times Herr G’s staff stopped to eat, smoke, chat and take cover from the rain.

But, thankfully my first impressions were wrong. I approached the work as I would have done back in the UK, expecting I’d easily be able to complete a full day of hard labour. But, after having performed three days of it (yep, only three days), I can now say the above stereotype has been officially challenged. The climate across Mexico makes work very, very taxing. This, plus the lack of available technology, increased the amount of work exponentially. Finally, there’s the lack of food and clean water, and so energy and hydration to take into account – I couldn’t just pop off to Tesco for a Meal Deal. 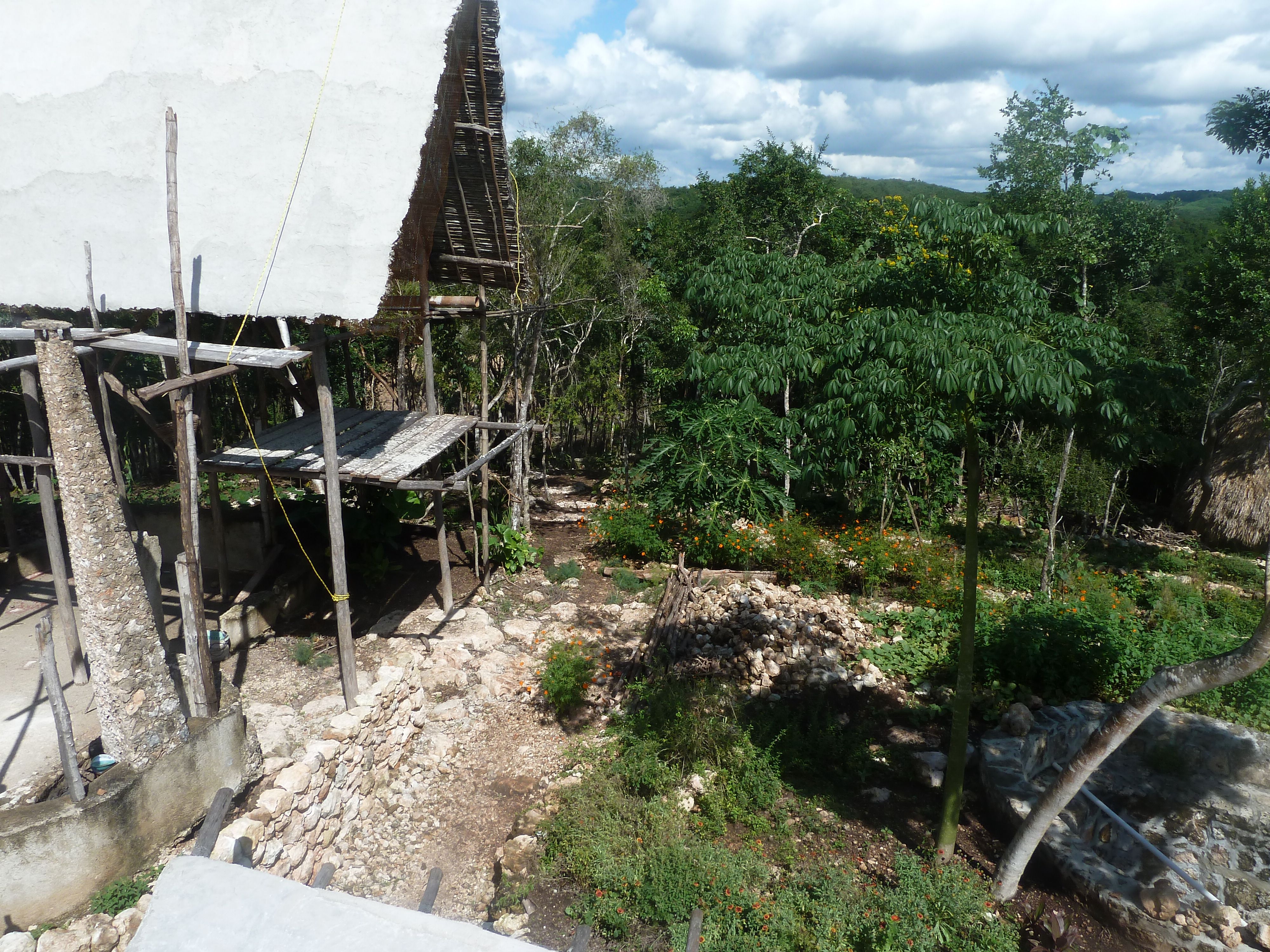 Construction of the Mayan Cathedral.

Sure, the blue-collar workers of Mexico are the ones often seen sleeping under a sombrero outside their house or on their food stall or on a building site, but they have it a lot tougher than most in a country like the UK. The main thing that blew this stereotype out of the water for me was the sight of elderly men and women working under the midday sun, when their western counterparts would likely be comfortably retired on the golf course, with a tidy little pension.

One old man in particular I witnessed clearing a patch of land overrun by 7-foot tall weeds, all on his own and with only a machete for company. In 27 degree heat. I don’t know if you’ve ever used a machete for an extended period of time, but I have, and it’s tough. The blisters start coming after an hour, and start bursting through your gloves after two hours. His progress was astounding.

So, as I sit here on the Metropolitan Line at Baker Street, London, watching people scrabbling for seats as if their lives depend on it, I feel a world away from the real-hard work that was so evident around Mexico, and I am once more filled with admiration.