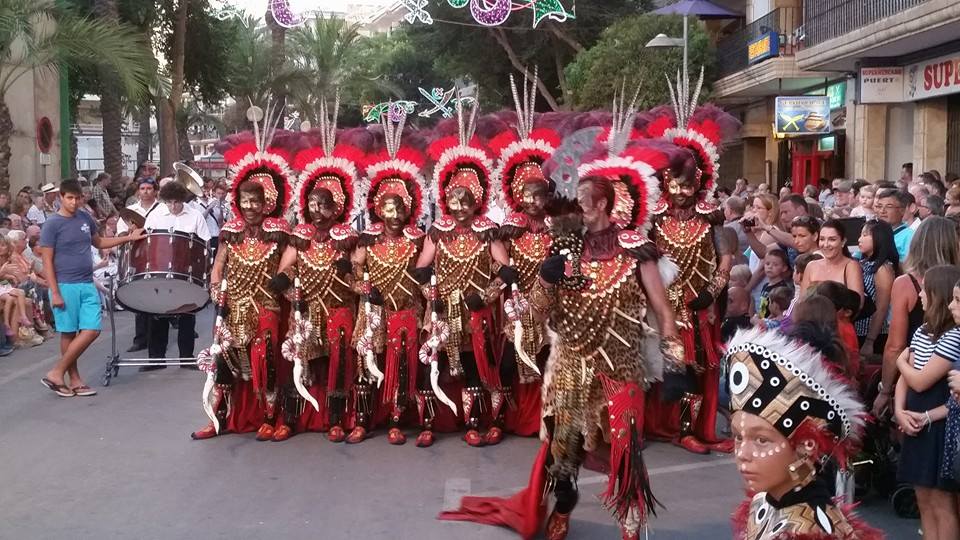 A distant fanfare cuts through the sultry evening twilight of a small town in the Comunitat Valenciana. Like church bells on a Sunday morning, the rich trumpet melody calls for the townsfolk to gather, and gather they do. But this is no religious vigil, despite being just about as frequent as Sunday Mass during these summer months. This is fiesta.

For the bustling coastal community of Xàbia, late July sees one of Spain’s most historic spectacles, the fiesta of Moros y Cristianos (‘Moors and Christians’). Celebrated in much of the country but especially popular in the Comunitat Valenciana, the festival is a long-established tradition marking the eighth-century arrival of the Moors to Spain and the following hundreds of years of Islamic and Christian coexistence. These were centuries fraught with the battles of the Reconquista, a violent and bloody affair which eventually led the Christians to reclaim the country after the fall of Granada, the final Moorish stronghold, in 1492. Traces of the country’s Moorish past can be seen in several elements of modern Spain, from the Arabic influence on the Spanish language (ever wondered why the Spanish zanahoria is so far removed from the French carotte, Italian carota and English carrot?) to the architectural feats of the Alhambra Palace and Córdoba’s Mesquita-Catedral. Reason enough to party, then.

If history provides the staple ingredient of the festivities, each locality adds its own unique flavour. In Xàbia seven centuries’ worth of culture are re-enacted over seven days and what with mock battles (complete with authentic guns and scimitars, naturally), traditional medieval food markets and spontaneous street parties offering paella for all, the result is nothing short of extravagant. This is not to mention the correfocs (‘fire-runs’), in which groups of black and red-cloaked individuals dance through the crowds wielding firecrackers, sparklers and several other forms of pyrotechnic paraphernalia.

It is the finale procession, though, which really steals the show. At 9pm (an hour after the scheduled start time) excitable murmurs can be heard as locals and tourists alike begin to appear in the Port. Restaurants and bars fill up, residents gather on balconies and crowds line the streets, some locals even bringing with them their own dining room furniture to relax while enjoying the show. Soon after, small armies of Moors made up of local men, women and children of all ages can be spotted. Dressed from head to toe in flamboyant red and gold fabrics, they parade down the street accompanied by belly-dancers, music and the occasional shout of ‘¡olé!’ from somewhere in the crowd. They are indeed an elegant sight to behold, so much so that nobody seems to bat an eyelid at the fact that many of them appear to have ‘blacked-up’ as part of their costume, a somewhat shocking feature for the average British onlooker and one which undoubtedly would not have gone down so well elsewhere.

Next come the Christians, although not before a gaggle of trained geese has waddled its way through the street (for reasons unknown) to raucous applause from the spectators. Despite the sweltering July heat the Christians are fully clad in wrought-metal armour, a stark contrast to their North African counterparts. Many ride through the crowds on horseback, brandishing their swords in declaration of their victory over the Moors in the ‘battles’ of the week gone by. There are of course no safety barriers separating them from the crowds; one can only hope that, like the geese, the horses are accustomed enough to large groups of people so as not to be alarmed by their cheering.

Hours later the procession comes to an end as its participants disperse into the crowds. Many of them gratefully receive glasses of beer from accompanying family members; any laws against consuming alcohol in the street appear not to apply during the fiesta season (or at least neither of the two policemen present at this particular event seem at all concerned). A short while later, as midnight approaches, people begin to gather along the seafront; rumour has it that a firework display is about to start. The street lights are switched off and sure enough, a few minutes later, the night sky is alight with showers of golden sparks which briefly illuminate the coastline before falling gracefully into the water below. For fifteen minutes this colourful display continues until, after a spectacular finale, the beach is once again plunged into darkness. As the last rumbles from the explosions reverberate across the bay and disappear out to sea, the crowd erupts into applause; this year’s fiesta has, quite literally, gone out with a bang.

It is somewhat remarkable that events like this continue to thrive in a country where a quarter of the population is unemployed – fiestas, after all, do not come cheap. Perhaps they are maintained through tradition, or maybe as a means of distraction from everyday financial struggles. Whatever the reason, the unwavering good spirits of the people of Xàbia make for a great party, even if some elements are a little puzzling for a British bystander. As the Moros y Cristianos crowd dissipates the odd glum face can be seen, a sign that fiesta time is over and that it’s back to reality for this small Valencian community. Well, until next week anyway.