For as long as I can remember, home has always been the warmth of sunny days spent with my friends, sweating in the heat as we wait in line to finally eat some tasty pani puri (an Indian street food); cool nights spent on the terrace singing the lyrics to the latest songs and counting constellations. My home is in Ahmedabad, a city in the state of Gujarat, a small speck in the vastness of India. 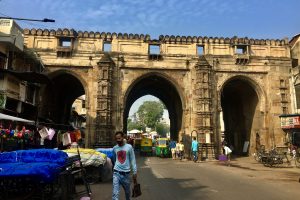 Moving to the UK has been an immense cultural shock, and every day that I’m here, my heart aches when I think of home. I grew up in a beautiful place, and although not many people recognise Ahmedabad when you speak of India, I can assure you that it’s a gem waiting to be discovered. Ahmedabad is an amalgamation of monuments steeped in rich history, and of contemporary buildings constructed in the last few decades. Nestled in the heart of Ahmedabad is the old city, with its magnificent minarets and colourful, crowded pols (residential areas), lively with small sparrows and pigeons circling around well-stocked  chabutras (birdfeeders). The small winding streets and numerous mosques, as well as the centuries-old intricate carvings and buildings are some of the things that make Ahmedabad India’s first UNESCO World Heritage Site. The old city is the perfect place to get lost in the culture that has stood the test of time, and which captures the essence of Ahmedabad. The Sabarmati River, and the numerous bridges crossing it connect the old city to the new. The contrast between the old streets and the modern high rises, sprawling malls, cafes and restaurants is stark, but gives the modern city an ancient charm. 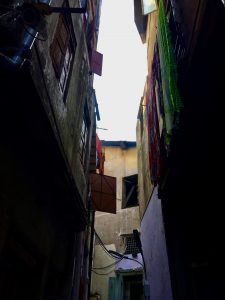 Narrow streets of the old city. Image by Ruhee Parelkar.

The difference between night and day is just as sharp in Ahmedabad as it is between the old city and the new. One of the fondest memories I have of my hometown are the nights I would spend manoeuvring through traffic to find a good spot at the Drive-In theatre. I would settle in the car with my homemade snacks and re-watch my favourite Bollywood flicks with more than 600 cars around me. Correctly mouthing all the dialogues, I would slowly lose grip with reality and slip into a fantasy world. This was almost always followed by a visit to Manek Chowk, the hub for late night street food in Ahmedabad. If the aroma of a million different types of street food wasn’t enough to draw you in, the sight of all the carts lined up with their goodies and vendors advertising their dishes over songs blaring from loudspeakers definitely did the trick. What I’d do for a bowl of hot, steaming Maggi topped with cheese! I can almost taste the hot, fluffy, spicy samosas melting on my tongue, followed by cool chaas (buttermilk) – a must if you don’t want your tastebuds to sizzle! 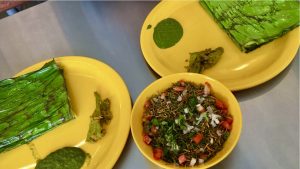 Ahmedabad offers a variety of delicious street food on every corner. Image by Ruhee Parelkar.

The way we celebrated festivals at home was also unparalleled. ‘Navratri’, which is considered the longest dance festival in the world, was nine continuous nights of pure exhilaration. We dressed up in our best traditional attire – lehenga-cholis and kurtas, binged on fafda-jalebis, and did ‘Garba’ and ‘Dandiya-Raas’ – the folk dances of Gujarat till late at night. Every second of dancing was worth the exhaustion, sore feet and dark circles around our eyes revealed the next day. Another was ‘Uttarayan’ in January, a two-day Kite-Flying festival where we gathered on terraces and flew kites until the blueness of the sky was slowly replaced by the bright colours of the kites. At night, we set afloat hot air lanterns, watching as the night sky lit up and, I swear,  began to look exactly like that one scene from Disney’s ‘Tangled’. The festivals were the time of year when I would venture more often into the old city, and get lost among the winding streets nestled with ancient buildings. 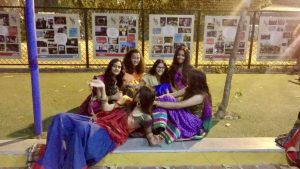 My friends and I at ‘Navratri’, the longest dance festival in the world. Image by Ruhee Parelkar.

Covid-19 disrupted my plans to bid a ‘proper goodbye’ to my hometown, and now, in a Durham lockdown, I can only dream of all the things I wish I could have done one last time. Perhaps I could have taken one more pillion ride with my friend on her two-wheeler ‘Activa’, my hair flowing in the wind as I gripped my helmet full of adrenaline. Or maybe I could have taken one last quiet walk along the Riverfront with my dog, stopping every few feet when she became excited by a plastic wrap flapping in the light breeze. Perhaps, if I had had one last night-stay at my school, I could have bid goodbye to the long nights of card games, the dancing with reckless abandon, and watching the sunrise paint the city in shades of gold, crimson and amber the next morning. If the pandemic hadn’t happened when it did, I would have done all of these things and more, bringing to Durham more memories, instead of dreams of what could have been.

I haven’t been back home in almost five months now, and the ache in my heart is a constant reminder of everything I miss. Every time I miss home I close my eyes and begin a slideshow of all the memories I’ve made there. It’s a kaleidoscope of vivid colours, laughter, adventure and warmth. For the longest time, I thought of home as a place, or a person, but home is so much more than that. Home is every single memory that makes you who you are, and fills you with joy, safety and comfort. And every single memory of mine is tied to my home city. So, while I might not be there at the moment, I can always rely on the memories I’ve made in Ahmedabad to take me back home.

3 thoughts on this article.